Of Rail Yards & Tourism: A Visit To The Folkston Funnel 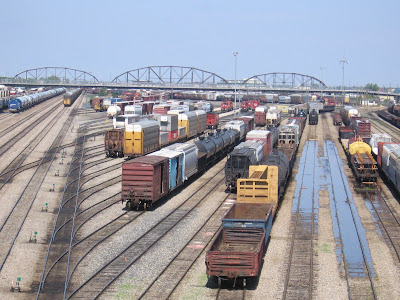 The CPR yard in Winnipeg: A "horrible scab"
or a tourism opportunity?

Like others who like trains, railway tracks and yards aren't seen as unwelcome instrusions--but not everyone feels that way, including a Member of Parliament from Winnipeg. After reading his comments, and an article in the Winnipeg Free Press, I wrote the following for the Free Press in February, 2008. Scroll to the bottom to see photos of railway action in Folkston, Ga.

"Instead of moving the CP yards, we might reframe them as an attraction, a focal point of pride instead of a barrier," he wrote. "Why not provide a warm public observation deck like the airport does, with interpretive components?"

It sounds crazy. Who would want to look at trains?

Tens of thousands of people, as it turns out.

In places like Folkston, Ga., and Rochelle, Ill., people once viewed the trains that passed through their towns the way many Winnipeggers view the CPR yards--as a nuisance, a blight on the landscape. But today, people in those two communities see them in an entirely different way as thousands of railfans come from all over the world to watch trains travel through their towns.

Take Folkston, for example. I called Claudia Burkhardt, director of that small town's Chamber of Commerce.

"Wait a minute until the train goes by. I can't hear you and you can't hear me until it's gone," she said, the sound of crossing gate bells and a train horn filling the telephone line.

After about 30 or so seconds, silence returned.

With between 40 and 60 trains roaring past her office every day, interruptions like that once were annoying, Burkhardt admits. But ever since the town built a special train-watching platform beside the tracks, her view has changed.

Today the little community of 2,200 near the Florida border attracts about 20,000 railfans every year to watch trains on the busy CSX mainline that bisects the town.

"It's been a real economic boon to our little community," she says. "It's good for the restaurants, motel and bed and breakfasts--a lot of railfans stay here."

She estimates the railfans spend more than $500,000 in Folkston annually.

Indeed, it has. I, for one, would never have visited the town if it weren't for my own interest in trains. When an opportunity arose to visit nearby Jacksonville, Fla., a year ago, I made sure to set aside a day to go there.

I enjoyed the covered platform, erected by the town in 2001. It contains chairs, benches, ceiling fans, picnic tables, lights, a barbecue, maps of the tracks leading into town and bathrooms. The town also installed a sound system tuned to railroad radio transmissions; railfans who use the platform can always tell when trains are coming.

Before they built the platform, most people in the town thought the trains were a nuisance. Train watchers were seen as being interesting and unique, at best, and maybe downright crazy at worst.

"A lot of people thought this was the biggest waste of money," Folkston Mayor Dixie McGurn said in an interview. "I think they're seeing it differently now."

Folkston was inspired to build its platform by the experience of Rochelle, Ill. The town, located about 110 kilometres west of Chicago, was the first community in the U.S. to create a place especially for people to watch trains.

About 100 trains a day use the busy mainlines of the Norfolk Southern and Burlington Northern and Santa Fe railroads, which cross in the town of about 10,000. The volume of train traffic had always attracted train watchers. In 1997, the town decided to capitalize on the interest by erecting a platform and small park on an elevated parcel of land near the crossing.

As in Folkston, the platform and park provide various amenities for train watchers, along with speakers carrying railroad radio transmissions. There are historical displays, including an industrial switch engine built in Rochelle, and it has a small gift shop where people can buy railroad memorabilia, film, batteries and snacks.

Although Renard couldn't provide an estimate for the park's economic impact on the town, he says, the local hotels and restaurants really appreciate the added traffic.

But would it work in Winnipeg? Daryl Adair thinks it might.

Adair, owner and operator of Rail Travel Tours, says that people from around North America already come to Winnipeg to see trains, gathering near the CPR yard to watch the railway action.

"There's a little-known sub-culture of railfans," he says of those who take his tours. But, he adds, they aren't the only ones interested in Canada's railways.

"The baby boomers are starting to explore their heritage," he says, explaining that many of the boomers who sign up for his tours say they've seen all the tourist destinations in Canada. "Now they want an educational experience -- they want to learn more about their country."

He thinks Winnipeg could take advantage of this interest by creating places to watch trains that contain interpretative plaques and signs. He notes the city already boasts railway attractions that draw tourists: The Prairie Dog Express, the Winnipeg Railway Museum and the Transcona Historical Museum.

Other Canadian communities are taking note of the growing interest in railways, he adds. Capreol, Ont., and British Columbia's Revelstoke and Port Edward are using the tracks through their communities as tourist attractions, and so is Portage la Prairie, where the busy CPR and CN transcontinental mainlines cross. Portage has an ambitious plan to create a railway park near the old CPR station.

"Many people know of Winnipeg because it is a hub for rail activity," Adair observes. "But we could do more to capitalize on our railway heritage."

Back in Folkston, Burkhardt admits not everyone is convinced the train platform is a good idea.

"They think it's crazy," she says. But, as the number of railfans visiting the town grows, and as they spend money there, more and more of them are "seeing the light."

And it's not just the light of a train coming down the tracks. Or, maybe it is. 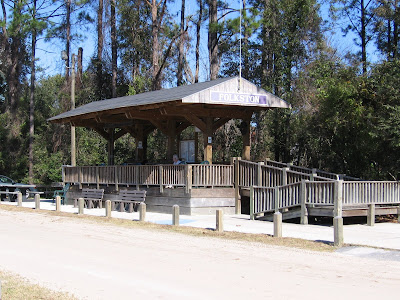 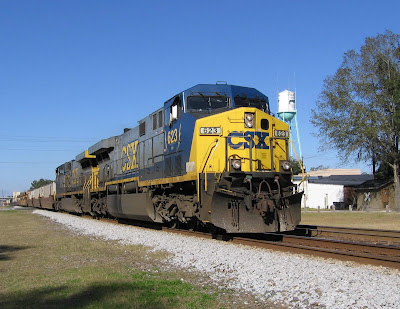 A CSX freight roars through Folkston.
Posted by JDL56 at 5:12 PM