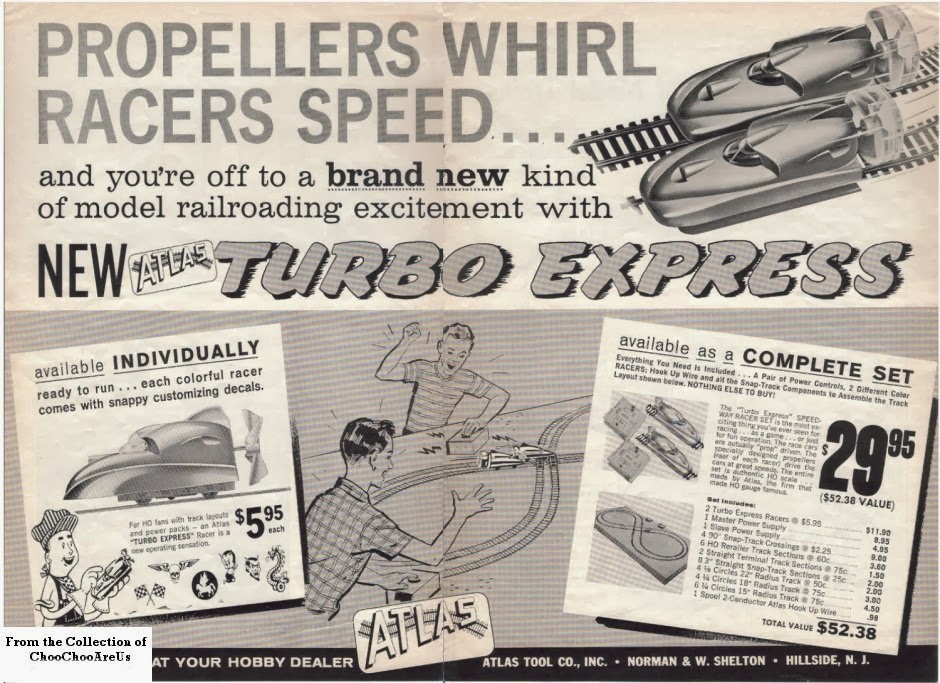 Turns out that Tri-ang Hornby wasn't the only company to make a model racer (in this case, the Battle Space Turbo Car, as noted in this post). Atlas made one, too.

In the case of Atlas,the Turbo Express looks more like a response to the slot car craze of the 1960s, which threatened to kill the model railroad hobby.


The propellers on the Atlas model were also intended to propel the car, but at least one person on a model railroad forum suggested it didn't work very well.

Interestingly, both models were based on a real prototype: The Schienenzeppelin, or rail zeppelin, built in Germany in 1929. 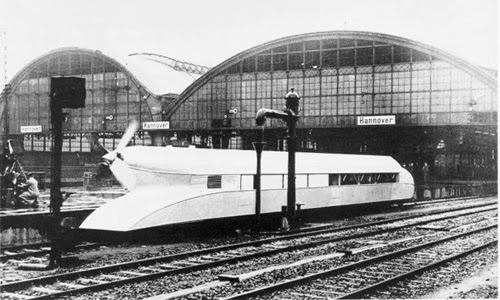 The experimental railcar was designed and developed by the German aircraft engineer Franz Kruckenberg. It used a propeller for propulsion. 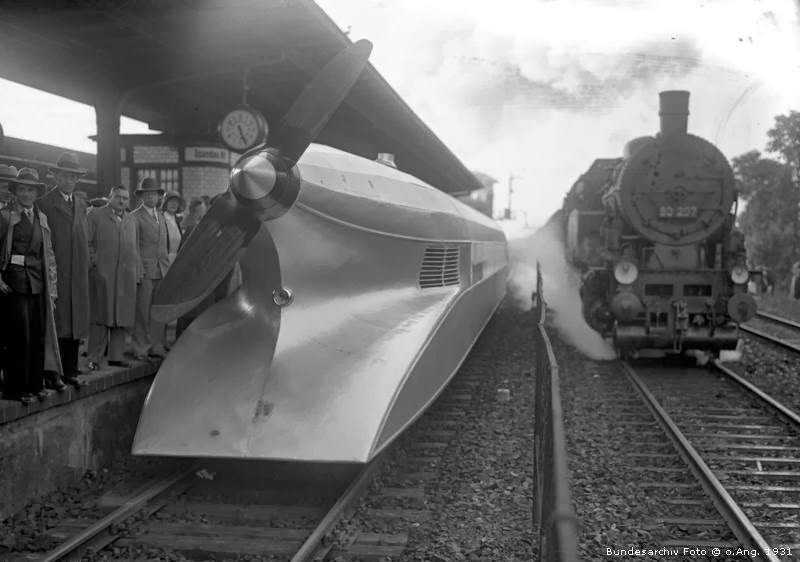 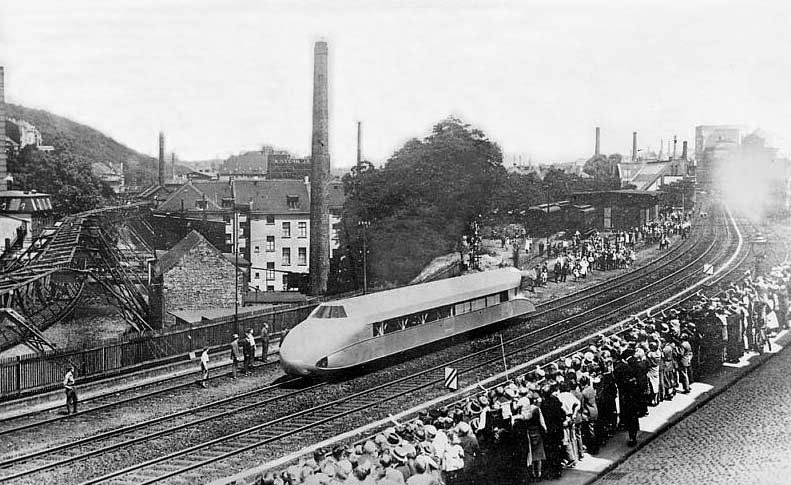 Only one was ever built; it was taken out of service in 1939.

Lionel also entered the fray, producing a race car set that used HO scale tracks. I wonder how that worked? 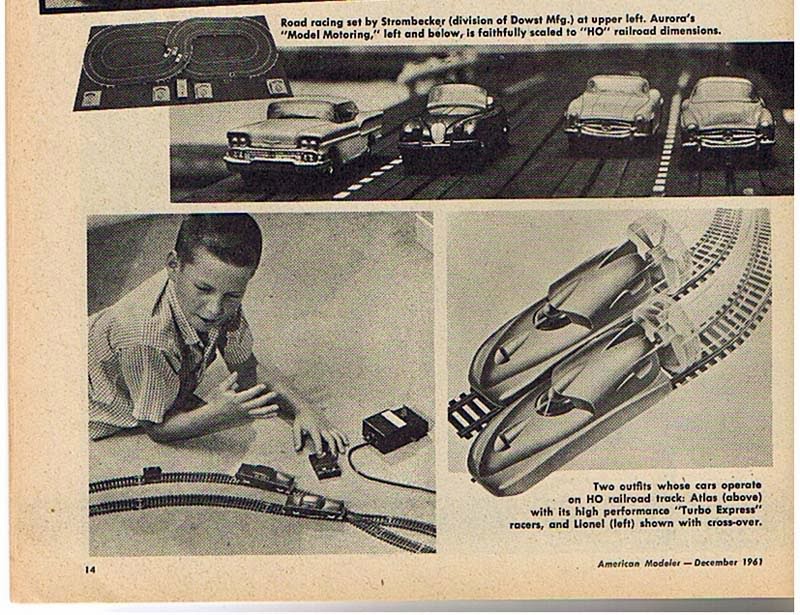 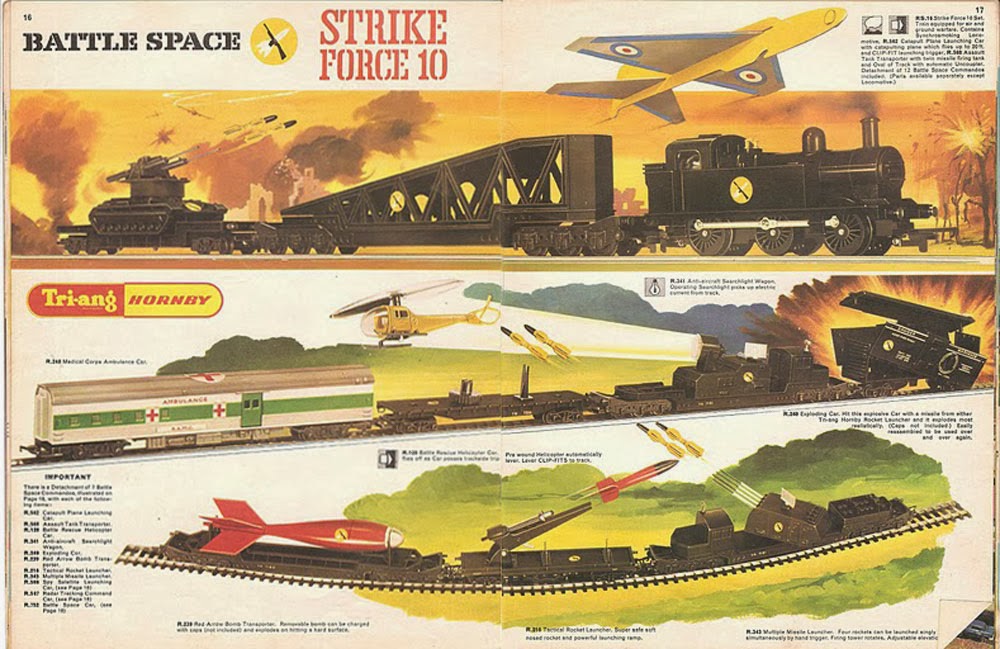 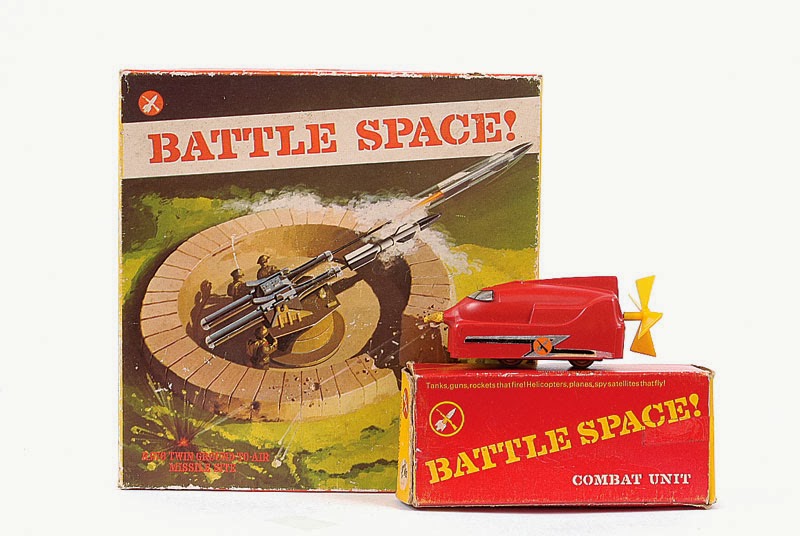 Atlas also made a turbo racer, called the Turbo Express. Click here to read about it.
Posted by JDL56 at 8:56 AM 3 comments:

More Progress on the Layout: Turning from Blue to Green

It's a long weekend in Manitoba--Louis Riel Day. It's a day to remember one of the founders of the province (and who was convicted of high treason and hanged by the Government of Canada in 1885).

In reality, the long weekend is a much-needed break for the citizens of this snow-bound province. For me, it was a chance to do a bit more scenery on the layout.


Slowly, the expanse of blue Styrofoam has been turning green. As of today, there is no blue left to be found. There's still lots of work to be done yet--ballasting, planting trees and other details. But at least the blue is now gone.


Click here to follow along the progress of hiding the hole and making scenery on this portion of the lower level of the layout.
Posted by JDL56 at 1:51 PM 1 comment:

I was surprised to recently discover that Bachmann, MTH and Rapido aren’t the only manufacturers to make models of the United Aircraft Turbo Train—so did Tri-ang Hornby.

Well, that’s not completely accurate. Tri-ang Hornby made a pre-production sample in CN livery, but never produced it. Something about the prototype train not proving to be very long-lived put an end to the plans.

I wonder what happened to the sample; is it sitting in a warehouse, or someone’s attic? Does anyone have additional information about this bit of model railway history?

Thanks to the Tri-ang Railways in the USA and Canada website for the surprising discovery.
Posted by JDL56 at 12:27 PM No comments: 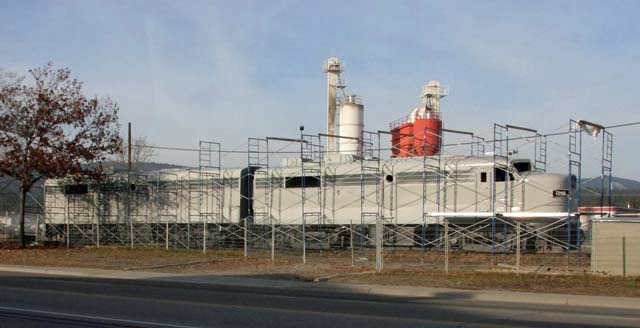 
With assistance from Cranbrook's Downtown Business Association, the two units will be repainted into the classic CPR maroon and grey livery. The Club hopes to have the job completed by July, this year.


In addition to the repainting, the Club will also do some landscaping and add a story board about the two units, which were built in 1953.

The units belong to the Canadian Museum of Rail Travel, which is located just south of where the units are located on highway 3/95. 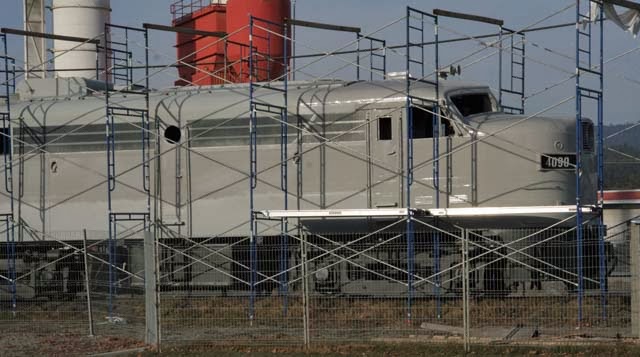 Turbocam! (Warning: May Cause Motion Sickness) 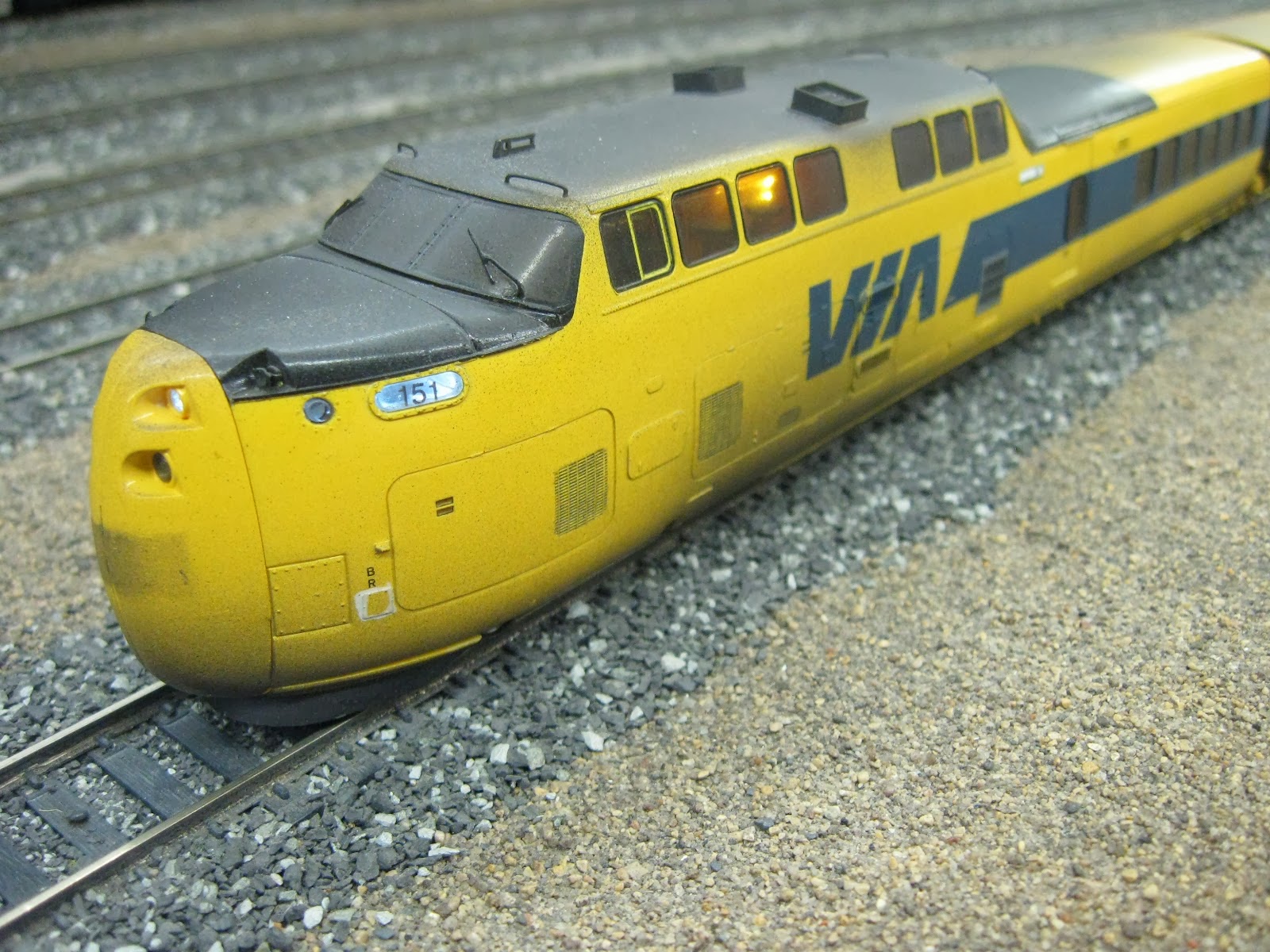 If you easily get motion sickness, this may not be a video for you!

Someone put a video camera on the front of a Rapido Trains Turbo Train, then operated the train at full speed around the layout. All I can say is: Wow!

Especially impressive is when the Turbo with the camera passes another Turbo going the other way. Blink, and you'll miss it.

The video doesn't note the location, but I think the action takes place on the West Island Modular Club layout in Dorval, Quebec. This is the same layout that posted a video of a 30-car Turbo Train.


Update: As the commenter below notes, this was indeed shot on the West Island club layout.

If you'd like to see the Turbo in a more normally-sized length and sedately operation, click here to view it during a visit to the Selkirk, Man. Model Railway Club layout.
Posted by JDL56 at 9:49 AM 1 comment:

In an earlier post, I wrote about how the town of Nance is one of three "switching layouts" on the CP Rail M & M Sub. (Areas where operators can switch a variety of industries or spots independent of mainline action.)

In that post, I described how the local drops off and picks up cars destined for the Peace River Northern, a shortline that interchanges with CP Rail at Nance.

Depending on my mood, either nothing happens to those cars--they are simply picked up by the next local through, having presumed to be loaded or emptied during their sojourn in the the Nance area--or I actually swap them out for cars from the PNR.

When the latter happens, number 6, the PNR's old CP Rail GP7, comes out from behind the hill to perform its switching duties--as seen in the photos below. 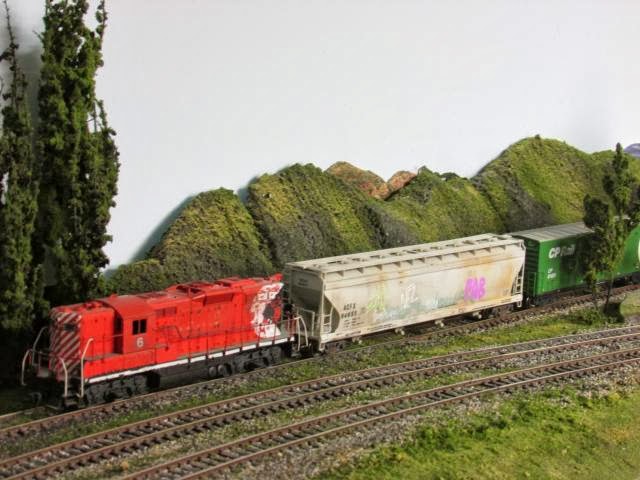 No. 9 appears from the hidden track behind a hill to begin the switching assignment. 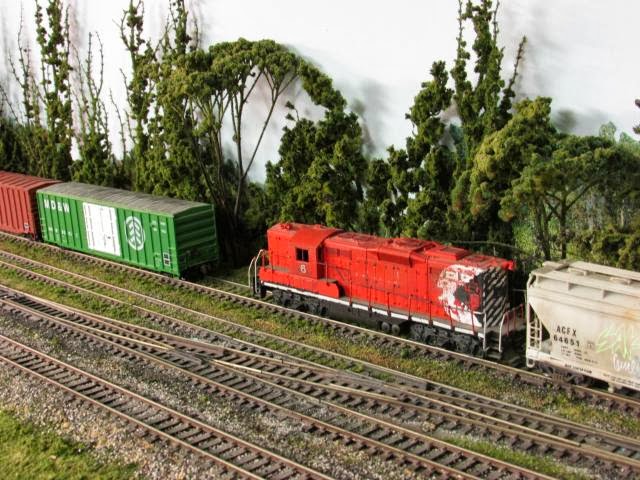 It couples with the cut of cars left in the small two-track yard. These cars are all bound for the paper mill. (See the industry that isn't there.) 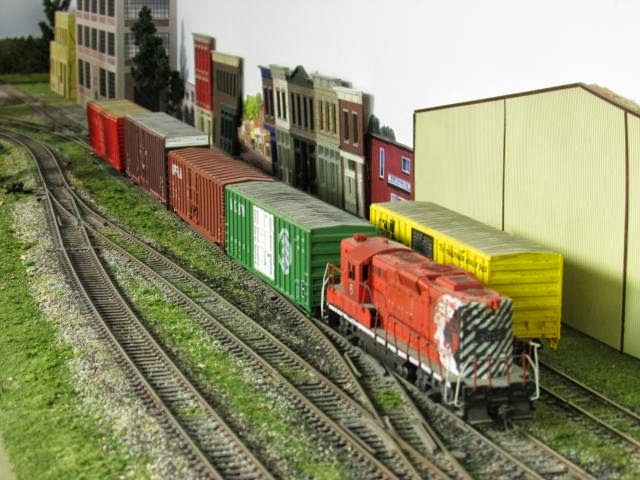 It pushes the cars through to the tail track at the west end of the yard, leaving the string of cars it brought to Nance in the now-vacated track. 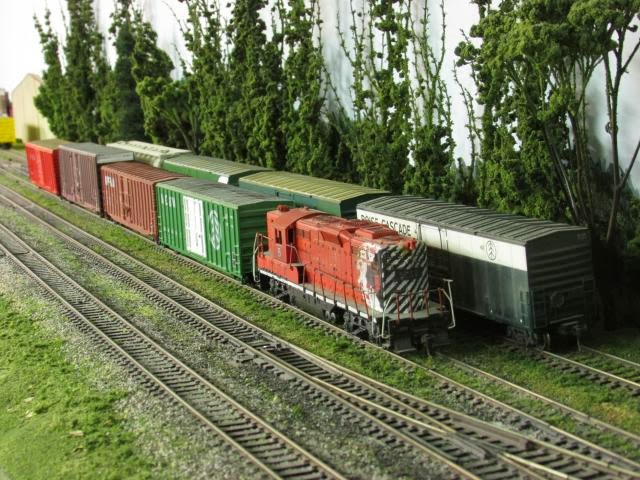 It pulls the new cut of cars past the cars it left in the Nance yard. 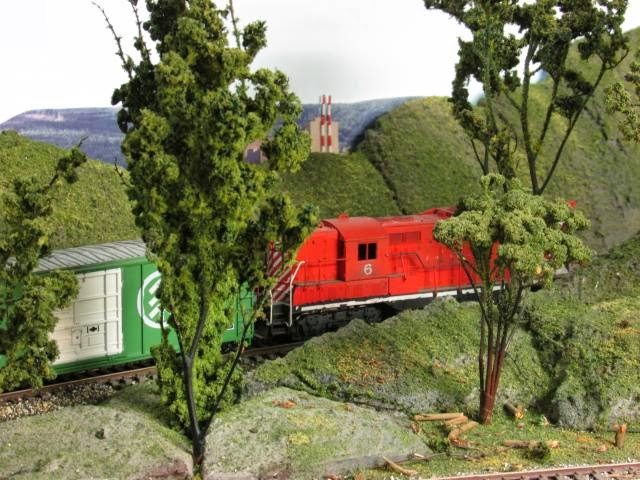 The PNR train heads back towards the mill (the industry that isn't there), seen in the background. 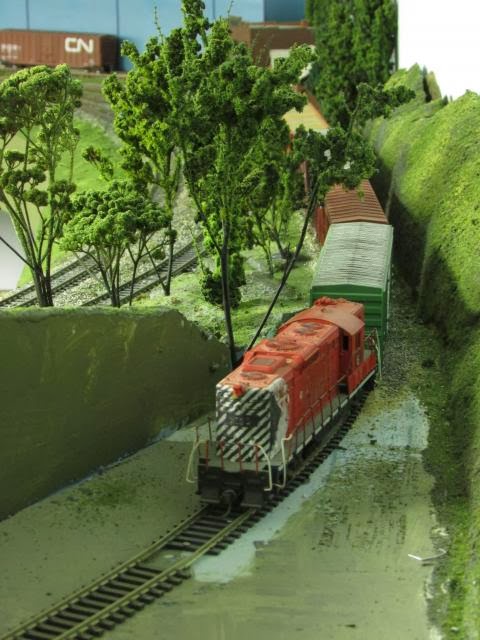 The view from behind "the stage" of the layout, as the PNR train heads into staging.

This was an easy switch; everything was bound for the paper mill. Sometimes cars left in Nance by the CP Rail local need to be switched into industries in the town. That complicates things for the PNR crew, which needs both yard tracks for passing (although it can ask for permission to use the CP Rail main, too).

Now there are four new cars ready to be picked up by the CP Rail local, the next time it comes to Nance. 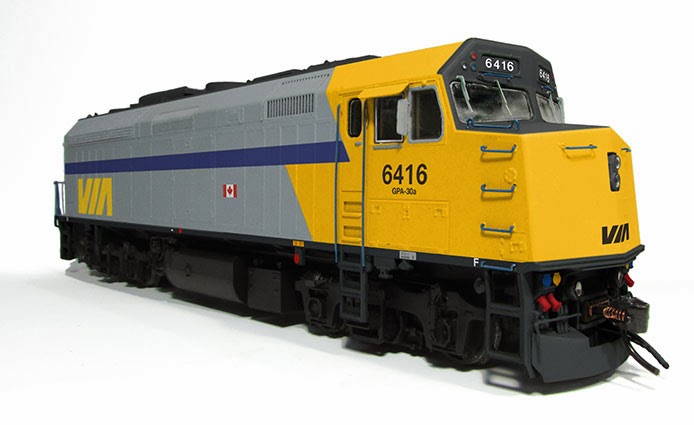 Big news from Jason Shron of Rapido Trains--they are making the first-ever accurate model of VIA Rail's unique F40PH-2D locomotive.

As Jason points out in his most recent newsletter, while there have been other F40 models painted in VIA colours in the past, there has never been an accurate model of this 3000-horsepower Canadian workhorse produced in plastic.

For those of us who model modern railroading in Canada, this is a great addition; the F40PH-2D has been the face of passenger train travel in Canada since the 1980s.

Built in London, Ontario between 1986 and 1989, the prototype features a desktop control stand (hence the "D" designation); a unique fuel tank and underframe arrangement; a unique carbody design with custom panel and door locations; and numerous other Canadian-only details.

Click here for more information about this great-looking HO scale unit, which was made at the request of VIA Rail.

Now if the CPR would just ask Jason to make a model of their Red Barns . . . .

So I’m watching the Super Bowl and wondering: What's wrong with the Broncos?

That, and this as well: Has anyone ever put a football stadium on a layout?

There are lots of layouts with baseball fields,like my brother-in-law's old Cougar River Subdivison. Most of the fields are small, often just sandlots, although a few museum layouts have incorporated large stadiums and fields (as you can see below).

But a football stadium of any size? I can’t find one.

I did find the amazing replica of Giants stadium below, but it doesn’t have a train. 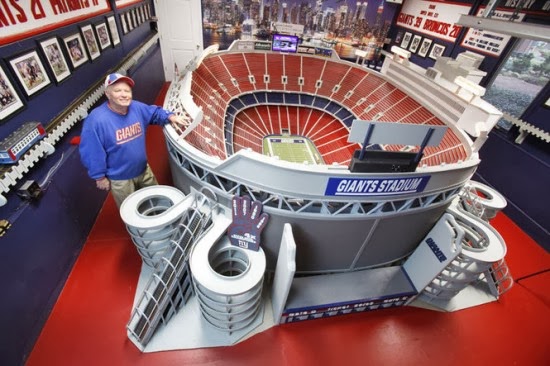 More information and photos of this amazing model can be found here.

The closest thing I found is a combination baseball-football stadium at the Motorcycle andModel Railroad Museum of Wisconsin. (A unique combination of hobbies . . . ) 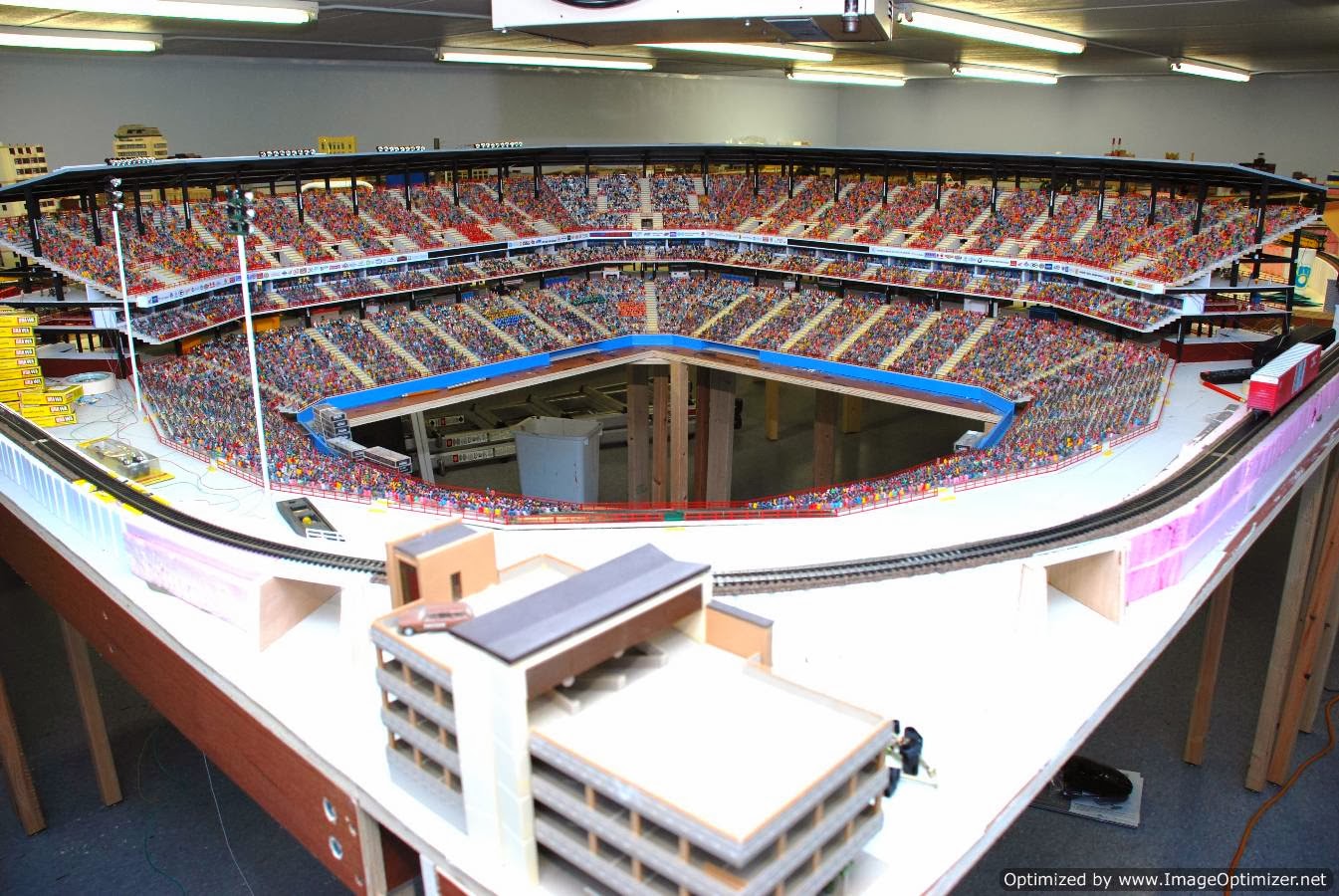 The stadium can feature either a baseball or football field, depending on the season, and can seat 40,000 spectators—there are “only” 24,000 in it now. (The field will go where the hole is right now.) It can also be illuminated for night games.

More photos of the stadium can be found here. 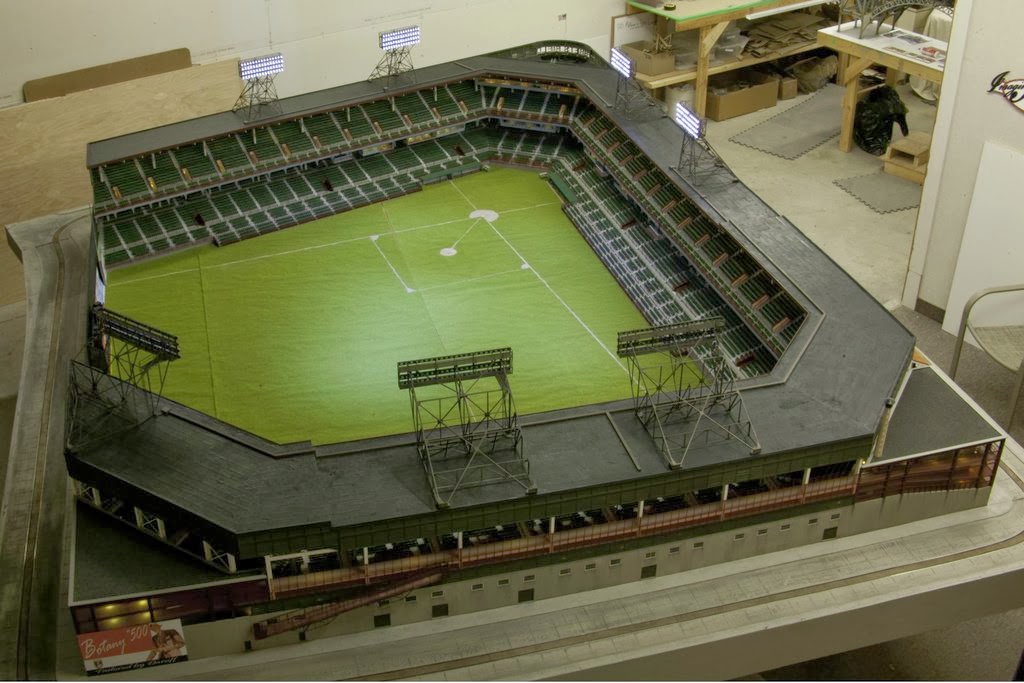 Since Ebbets Field was used for football and baseball, perhaps it qualifies as a football stadium. More photos can be found here.

Similarly, this S scale replica of Pittsburgh’s Forbes Field was also used for football, although once again it is set up for baseball at the Carnegie Science Center’s layout. 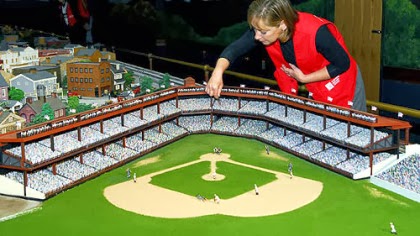 More information about that stadium can be found here.

But back to football stadiums (as the Seahawks are running away with the game in this, the first half). The Amarillo, TX Railroad Museum layout reportedly has a model of the West Texas State University's Buffalo Stadium to hide a helix. The layout diagram shows the location of the stadium, but I can’t find any photos.

If you go to England, you can find models of football stadiums, er, soccer stadiums, that is. Like this one of Old Trafford. No trains, though. More photos here. 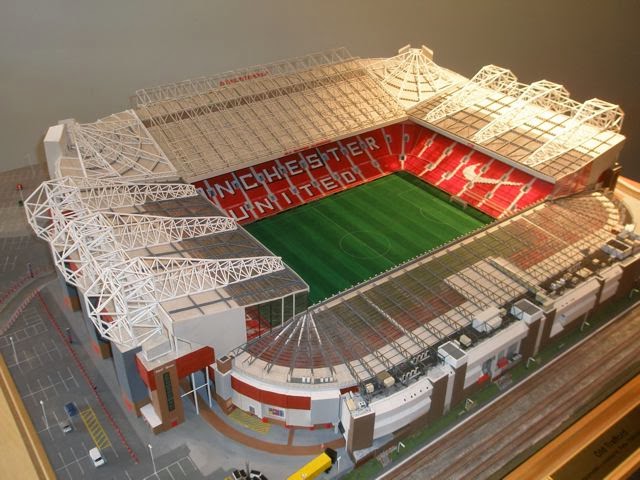 Meanwhile, in the Super Bowl, Seattle has scored on an interception, Denver has turned it over on downs. It looks like a blowout, not the kind of game I was hoping for. I don’t care who wins; I just cheer for a good game. So far, it is not a good game. But the models on this page are pretty amazing! 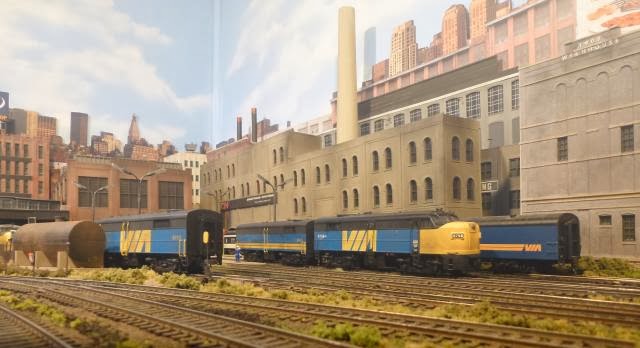 Since it was impossible to include all the photos of Chris Plue's Rapido Route in one post, here are some more. Included are a few overview shots of the layout from Chris. 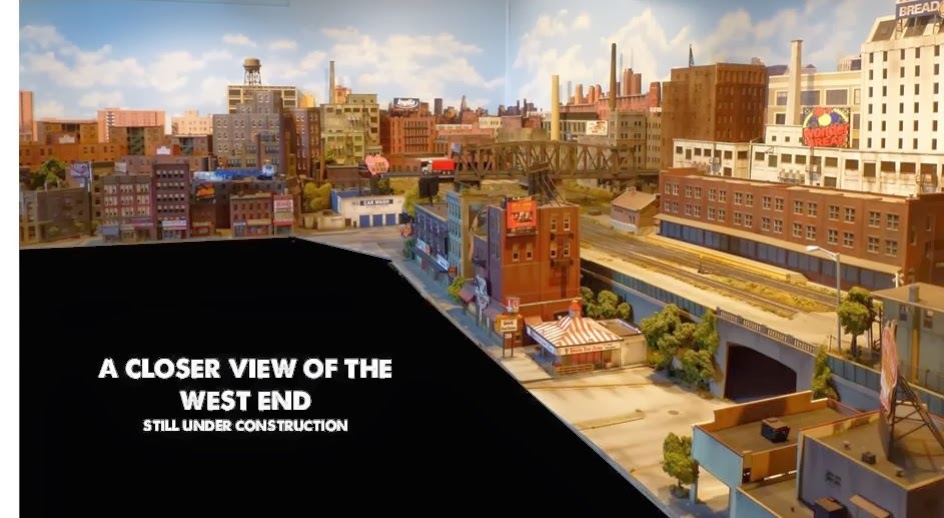 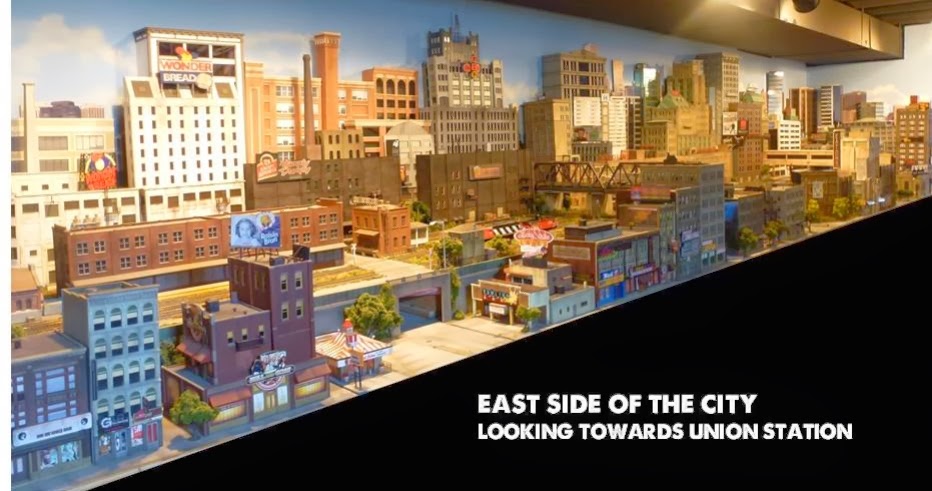 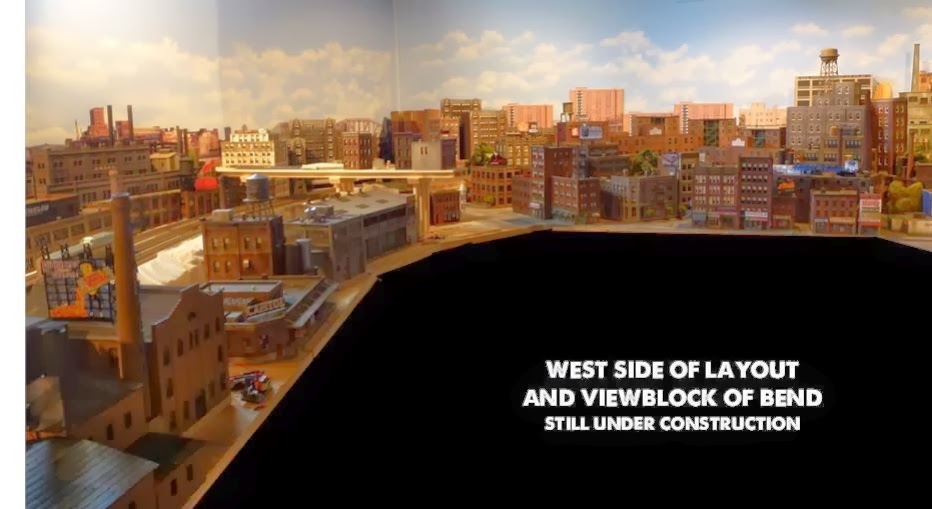 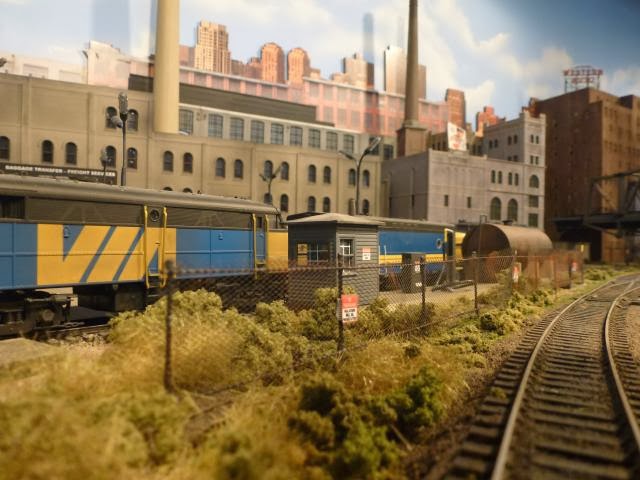 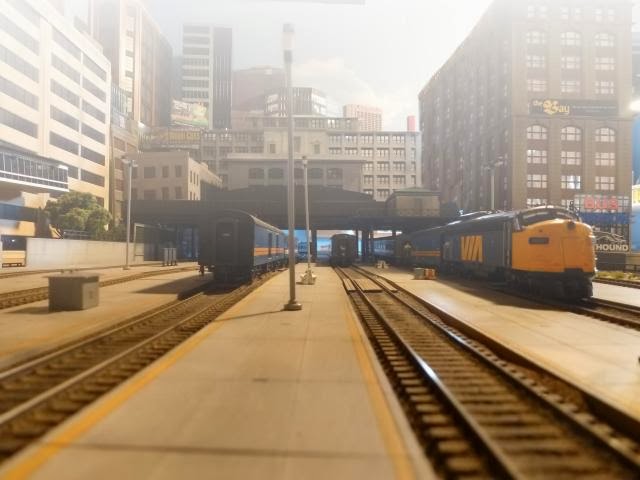 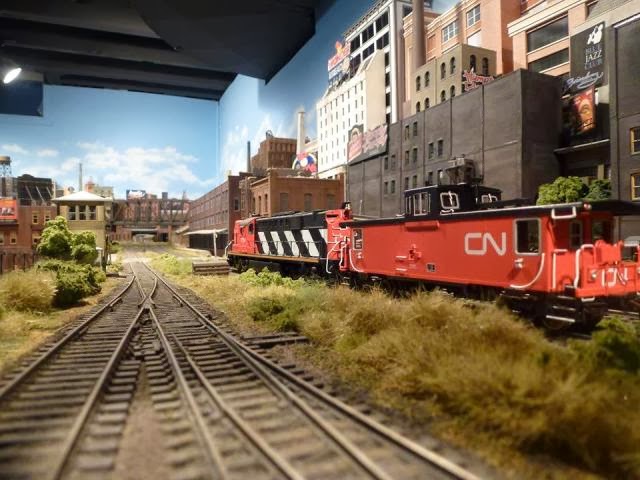