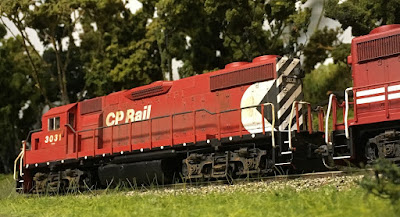 In my previous post, I noted that I wanted to vary the colour (add some darker green) and use longer fibres.

I got another package of static grass—darker green, and 12 mm this time. (The first package was 6 mm.)

I experimented with a combination of shorter and longer fibres, and I think I like the effect.

In truth, the longer fibres might be out of scale for the average HO-sized person (about half the size of a 1:87 figure). 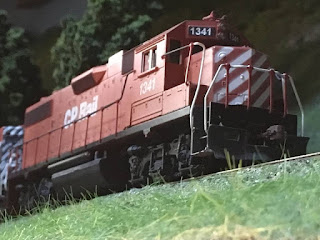 But for a full-scale human observer, it gives the sense that the grass is deeper. And it shows up better in photos, too.

(I might take some scissors to the grass and cut the taller fibres at random lengths; they look to uniform right now—in photos, at least. In real life it’s not so noticeable.)

One challenge I had was what to do with the areas where I had already added the shorter static grass. 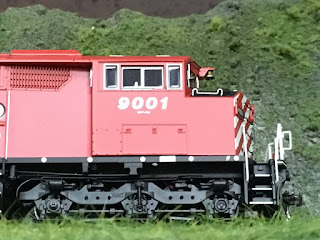 Smearing glue on it to add the longer fibres wasn’t an option; that would only flatten the existing grass.

Then I remembered how I made my trees, using cheap hairspray to hold the ground foam to the “branches.” (Actually common plants and weeds like spirea and yarrow.)

I tried it on the static grass, and it worked. A spray to wet the scene, add the new fibres, then another light spray to hold everything in place.

(Some websites and how-to videos actually recommend a quick spray of hairspray to make sure everything stays fixed.) 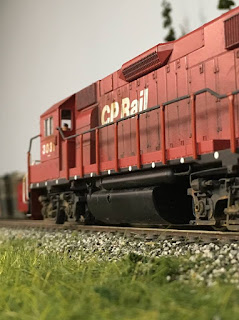 After applying the static grass, I use a home-made vacuum container made by my friend Larry Leavens to vacuum up any other loose fibres. (He also made the applicator—clever guy!)

So far, I think it looks good. But I don’t think I will apply it everywhere.

I think it will mostly go where I tend to take photos—that’s where static grass helps make scenes look more believable.

Then again, who knows? Maybe once I get on a roll, I’ll keep going. 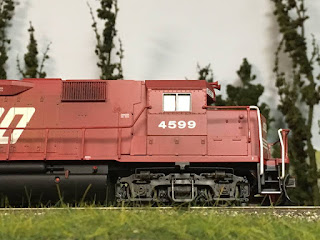 More news from Bowser for Canadian modellers (and modellers of Canadian railways)!

This weekend Lee English is officially announcing new production runs of the SD40-2f and SD40-2 models. 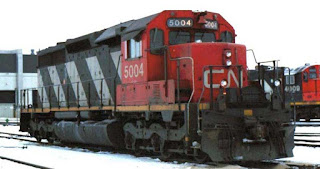 The SD40 is only being made in Canadian roads right now.

As for future Canadian runs, Lee says that he appreciates so much how “Canadian model railroaders have supported Bowser products” that he is “going to make more Canadian models.”

That, and do you think we can give him honorary citizenship? 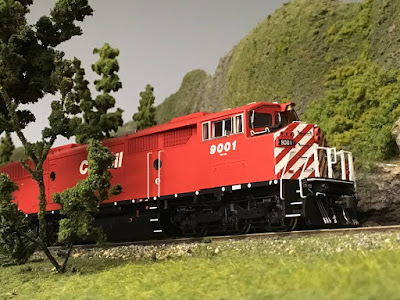 It’s been a long time since I did any scenery on the M & M Sub. Mostly, all I’ve been doing is operate trains, and a bit of weathering here and there.

But I’ve been impressed by photos from other modellers that include static grass. It looks very realistic! 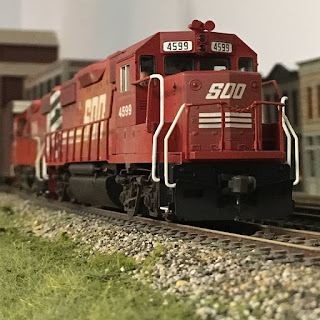 So I bought a couple packages of static grass (Noch and Woodland Scenics) to give it a try.

I also borrowed a handmade applicator from my friend, Larry Leavens. 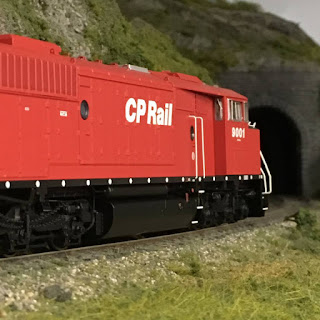 After a bit of experimentation, I like the effect. But I think I need to vary the height a bit—get some longer fibres to make it stand out more.

I also need to vary the colour—add some darker green.

I don’t think I need to apply it everywhere, just the places I think I’ll do most of my layout photography.

What do you think? Are you using static grass? 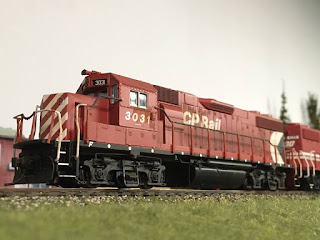 Visiting Power, and Visiting With Friends on the Manitoba & Minnesota Sub. 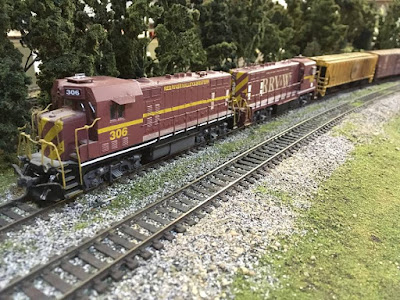 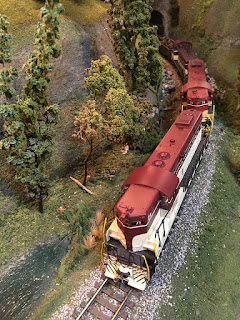 (I showcased Dennis' unique and great layout in a crawl space on this blog in 2012: See it here.) 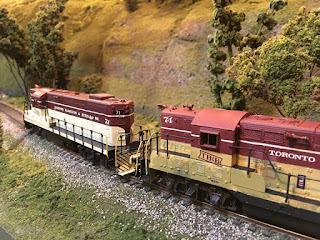 (The Red River Valley & Western is a shortline in North Dakota and Minnesota. Founded in 1987, it celebrated its 30th anniversary last year.) 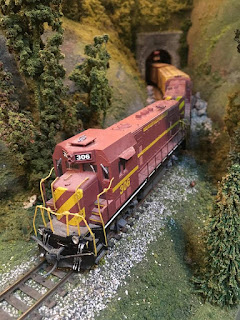 Over refreshments and conversation, we ran trains and visited—a great model railroad evening with friends. 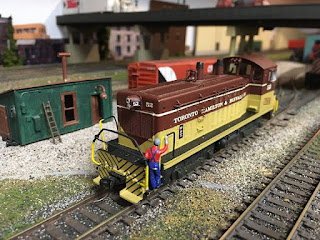 Larry also brought over his homemade static grass applicator, which I am going to try one of these days; I’ve been noticing how great photos with static grass look, and I want to see if I can add it to my layout, too.