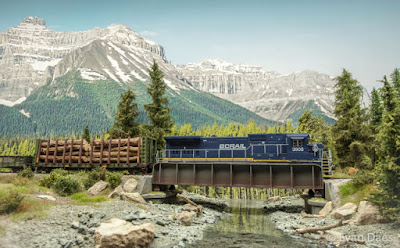 That’s all I could say when photos of Evan Daes’ great model railroad.

Evan, who lives in Belgium, models Canadian railways. I first saw his work on the Canadian Railway Modellers group on Facebook.

From scenery to backdrop to locomotives to rolling stock, everything is superb. I knew right away it was a candidate for my Great Canadian Model Railroads series. 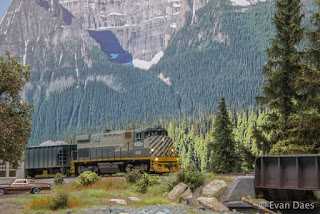 There are three unusual things about Evan’s layout.

Second, it took him only two weeks to build it. 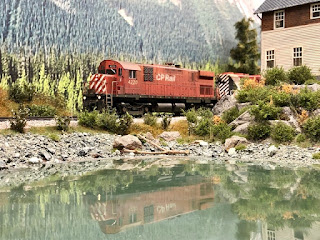 So how did someone from Europe get interested in Canadian trains?

“After several trips to the U.S. and Canada for holidays, I was quickly sold to those massive trains and scenery instead of the local European trains,” he says.

He started building small Canadian-themed layouts, taking them to local shows, and formed a club with others focused on Canadian railways. 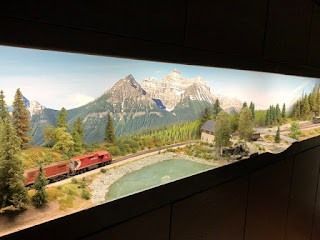 A custom layout builder, he has built 18 layouts in the past eight years, mostly on European themes. “But my heart is in Canadian railroading,” he says.

This layout, set in the Alberta-B.C. area, is not era-specific. “So I can use BC Rail, CP and CN,” he says.

As for construction, the layout is made from three modules, so it’s transportable if needed. 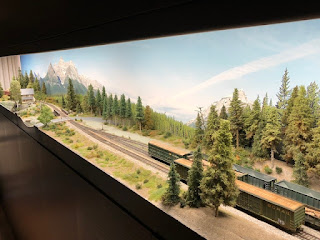 The track is handlaid on cork. Ties are made out of matches, and the rail is Peco Code 75.

The switches are also handlaid directly on the layout, and the points and frogs are made from a Fast Tracks jig.

The scenery is a Styrofoam base covered with Sculptamold—“my all-time favourite modelling medium,” he says. 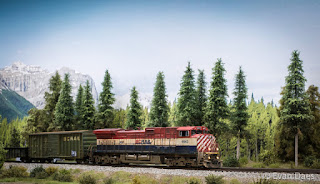 The rocks are also made from Sculptamold, while the dirt and stones are all natural cover he collects during the year.

The trees are a mixture of commercial and handmade, with most of the commercial ones are from a European company called Anita Décor. 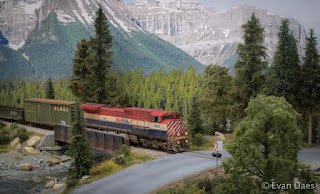 The self-made trees are made from twisted wire covered with Static grass and fine turf, and the bushes from Welberg Scenery.

The backdrop is from Herbert Lake, near Lake Louise, and printed by Pixers.ca.

The has a small lake and a creek. The creek is made on a base with Sculptamold, then covered with real crushed  limestone and set with PVA glue.

The lake is a flat layer of Sculptamold painted and sealed with acrylics to obtain the typical silted colours.

There is only one building on the layout, a house from a kit. The layout is operated with Digitrax DCC. 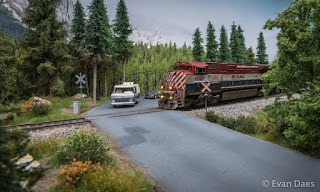 For Evan, “the small layout was and ideal way to try some new scenery techniques.”

“A layout is never finished,” he adds.

From what I see, it looks very finished to me! 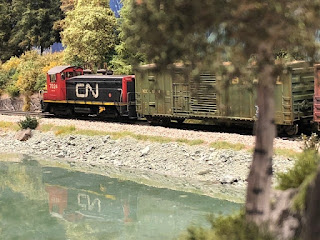 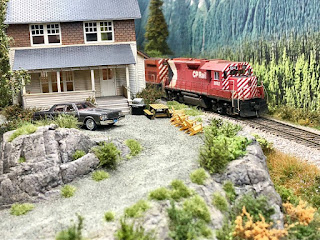 More Kim Adams and the "Art" of Model Railroading

In 2013 I wrote about Canadian artist Kim Adams and his 2012 installation titled Artist Colony (Gardens). 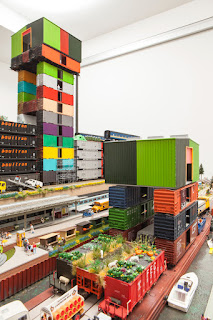 In it, Adams used a variety of objects, including HO scale trains, to make a fantastical and imaginary urban landscape.

Well, the 68-year-old artist is at it again. This time his newest installation is at the Art Gallery of Hamilton. 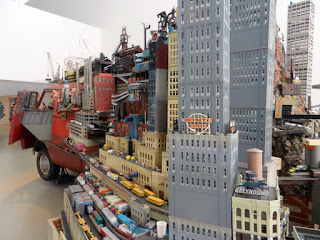 Lots of trains. And building kits.

According to the Gallery, the exhibit blends “humour, satire and seriousness” as he “builds ‘worlds’ as a means of social critique.”

It goes on to say that the “Kubrickesque megalopolis” draws upon “urban fantasies, phantasmagoric, post-apocalyptic landscapes, and a plethora of different times and cultures.” 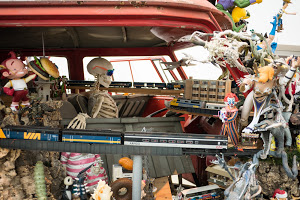 The Volkswagen van “appears to pull a post-industrial universe displaying a cornucopia of fantastic and seductive worlds that play with our senses,” it adds.

OK—whatever you say. What I’m interested in is the trains!

They appear to be from a mix of manufacturers, including at least one Rapido van. 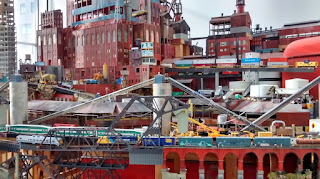 Of the trains, Adams says in an interview with the K/W Record that he finds they “have such a rich vocabulary" when it comes to art.

"I've always been interested in what you can buy at model train stores," he says.

As for the art itself, it has things in common with normal layouts. 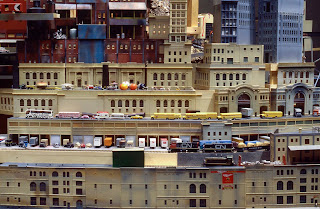 As Adams puts it, his art with trains builds "its own narrative," something you can make a world out of. 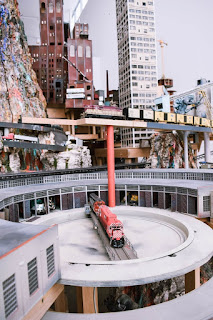 And like a freelance layout, there are “no rules for it." If something doesn't work, he says it "comes out."

Adams started the installation in 1997. Like a layout, the fun "is just watching it grow," he adds.

As for me, I think his unique art is weird, but also interesting.

And from a model railroad point of view, at least he’s keeping some hobby shops and manufacturers in business—and that’s good for us “serious” modellers! 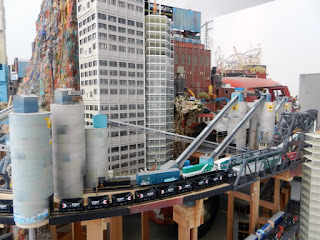 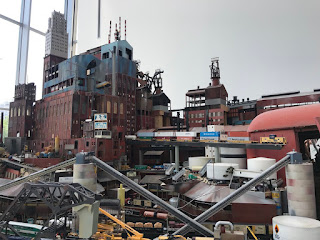