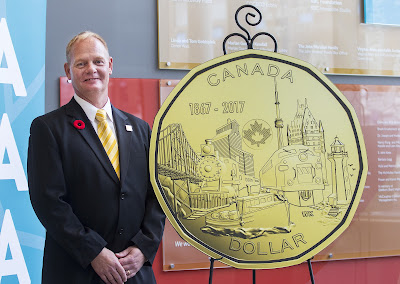 When I heard the Royal Canadian Mint had made a special railway coin to mark the 150th anniversary of Canada, I thought I’d check it out.

Naively, I thought that might be the only railway coin the Mint has made. Boy, was I wrong!

Turns out the Mint has made a number of railway-themed coins over the years to commemorate achievements, specific railways and even locomotives.

(It also made a $10 bill featuring a VIA Rail locomotive.)

But back to the anniversary edition; the Mint had a competition to create its new 2017 Canada 150 circulation coin series featuring the work of five Canadians selected by popular vote.

The winner of the competition for the $1 coin was Wesley Klassen  of St. Catharines, Ont. (photo above).

Klassen had two inspirations for his design; A love of trains, and Sir John A. Macdonald, Canada’s first Prime Minister and a father of confederation.

“The coin got me to thinking about how Macdonald created the national railway,” he said of his design, which he called Connecting Canada. “Then I added in scenes from my boyhood vacations.”

Which is cool—but that’s not the only train-themed coin the Mint has made over the past 30 or so years. 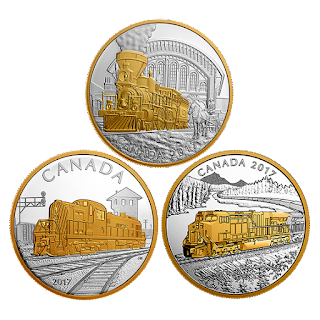 Also this year it made a three-coin series called Locomotives Across Canada. It features an
4-4-0 steam locomotive, an RS 20 (I can’t tell if that’s true or not, but someone reading this blog can confirm it); and an ES44AC.

Another coin, made in 2011, commemorates the creation of the Champlain and St. Lawrence Railway in 1836. 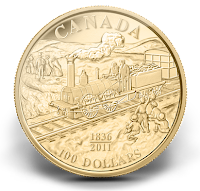 Another coin was issued in 2014 to commemorate the 100th anniversary of the founding of the Grand Trunk Railway. 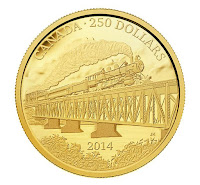 In 1986 the Mint issues a coin to celebrate the Steam Expo at the Vancouver World’s Fair. 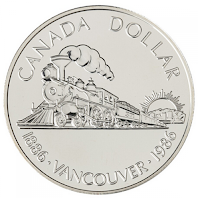 In 2018-11 it issued a set to commemorate the creation of the CPR, featuring a D-10, a Royal Hudson, a Jubilee and a Selkirk. 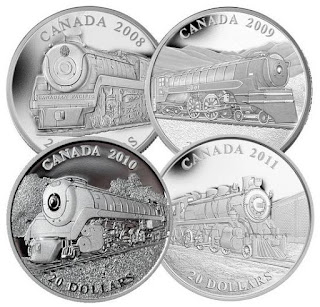 It also commemorated the Countess of Dufferin, on display here in my hometown, the first locomotive in western Canada. 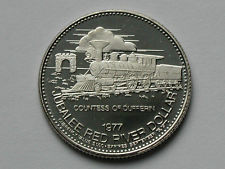 The building of the CPR received a coin in 2015. 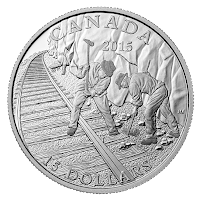 The contributions of the railways to the winning of World War 1 was marked in 2015. 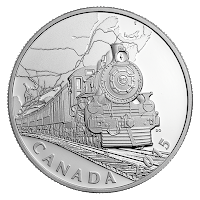 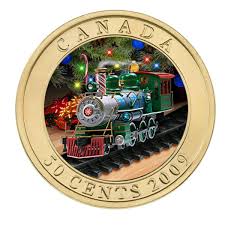 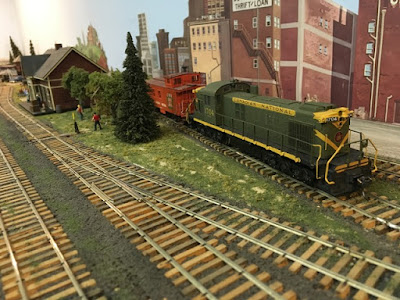 When I asked a friend in the Kitchener-Waterloo area which model railroads I should see during this year’s Doubleheaders tour, he said: “Make sure you visit Charlie Ellis’ layout!”

I took his advice, and I’m glad I did. Charlie has a great Canadian model railroad. 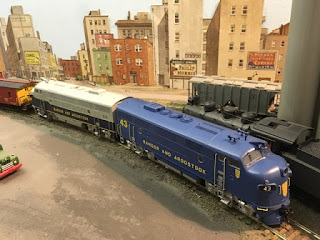 Scenery on the point-to-point layout is 95% complete; all the track is handlaid. Charlie uses Digitrax to control the trains.

I asked Charlie a few questions about the layout. 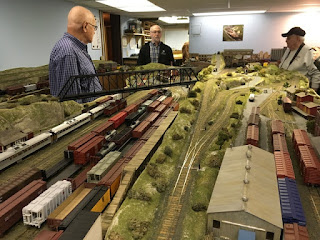 Why did you choose that era?

“The era reflects the railroad activity I experienced in my childhood. It didn't start out that way; I discovered HO model railroading in the 1960s and amassed collection of contemporary CN and CP models over the years, culminating in the construction of my model railroad starting in the mid 80s. 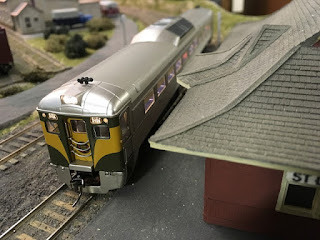 “At that time my two sons showed a keen interest in trains (I think it is in the blood) and we modeled the modern era along with a car card system for operations. When they grew up and left home, my interest in the modern railroad scene waned, as did operation of the layout.

“Then a friend in the hobby introduced me to DCC, and about the same time I realized that my real interest in railroads harped back to the good old days of the 1950s.

“So I sold off my modern railroad models (most of the stuff went to my sons) and started collecting models suited to the 1950's era and typical operations in the New Brunswick area that we model.” 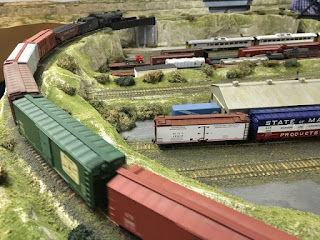 Why did you choose that part of Canada to model?

“Our model railroad operations centre on the town of St.Leonard, New Brunswick, as the Bangor & Aroostook interchanged with the CNR there and the CPR ran on the CNR through there via trackage rights. Presto: Three of my favorite railroads all in one place.” 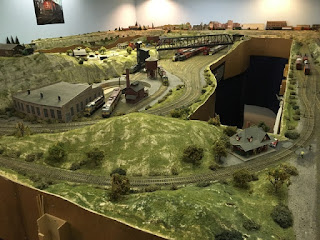 “My oldest son, while in university in the co-op program, had several work terms with CP, and being a computer and math whiz, wrote a computer program for the operation of our layout based on real railroad practices along with the basics of the car card system. We are still using that program.”

“Currently, I am part of a group of 5 or 6 other modelers, most of which have home layouts, and we rotate visits to each other's layouts on a weekly basis, focusing on operations.”

2017 was Charlie’s 10th year on the tour; if he’s on again next year, make sure you visit his layout if you are in town for Doubleheaders. 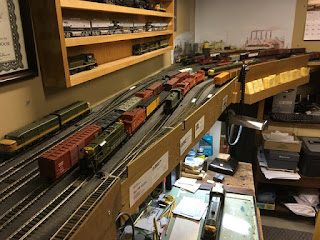 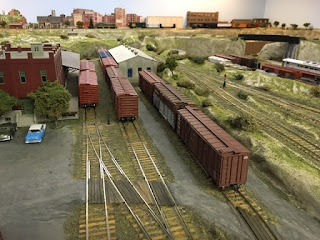 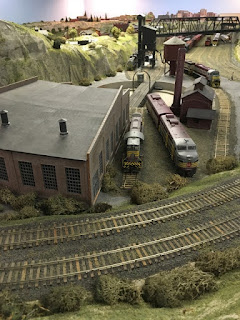 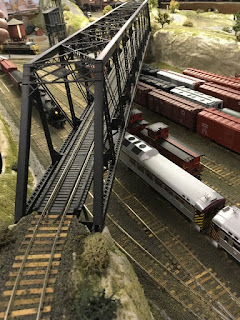 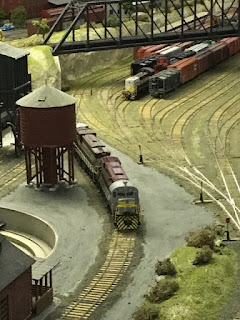 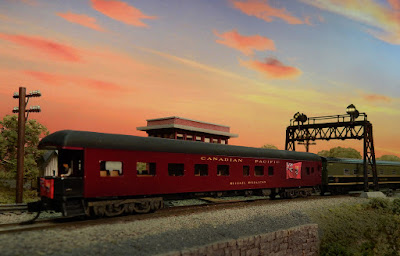 I never met or knew Mike McGrattan. But what I hear, he was a real “mensch”—a stand-up guy.

Mike, who died May 16, 2016 at the age of 52, was especially much-loved and appreciated in the North American N scale community. 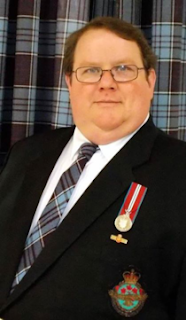 He was remembered as a talented and prolific modeler, but mostly for being a friend. 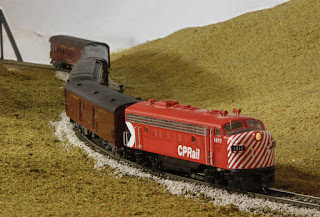 After he died, some friends on the Railwire Forum created the Michael McGrattan memorial train a collection of four passenger cars—including one lettered in his memory—that travelled across North America visiting N scale layouts. 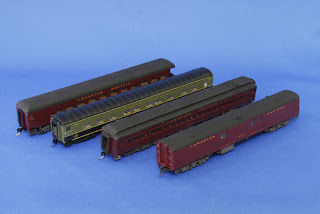 The train started its journey in July, last year. It has visited many different layouts since that time, in Canada and the U.S. 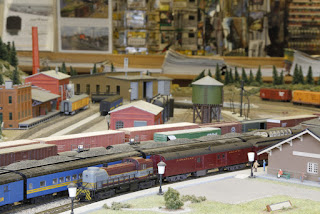 The last visit noted on the forum was in May, this year, when it ran on the layout of Mark Dance. 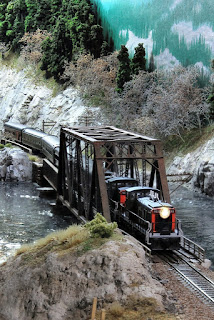 The memorial train is a great way to honour Mike, who also worked at Rapido Trains. I’m sorry I never got to know him.

You can see the whole journey, and read comments, on the Mike MxGrattan memorial train thread on Railwire. 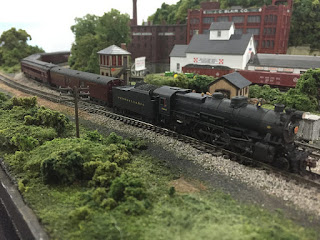 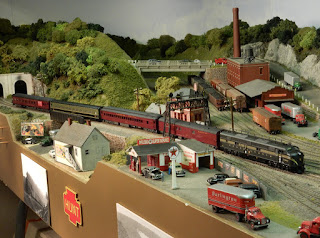 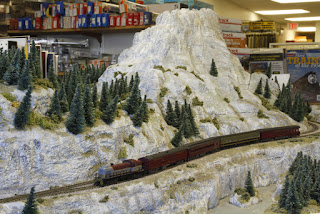 Click here to read more in my Death and the Model Railroader series.
Posted by JDL56 at 7:52 PM No comments: