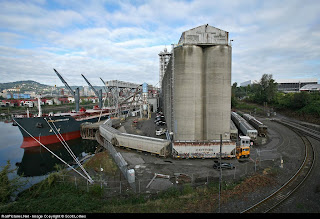 Who would believe it?


They say there's a prototype for everything. But does that include curves of 18 inch radius on a layout depicting a modern railway?
The answer is yes, as you can see from the photo above. The grain elevator is located in Portland, Oregon. Unbelievable!
Actually, that's what someone would say if they saw it on your layout. But then all you'd need to do is show them this photo for proof.
Thanks to Scott Lothes for permission to post the photo. See more of Scott's photos at http://www.railpictures.net/showphotos.php?userid=36075, or on his website at http://www.scottlothes.com/.
Posted by JDL56 at 4:35 PM 1 comment: 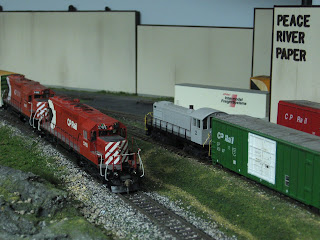 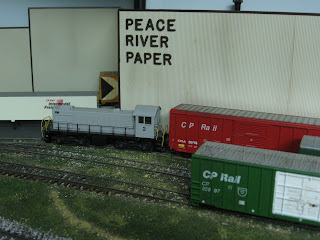 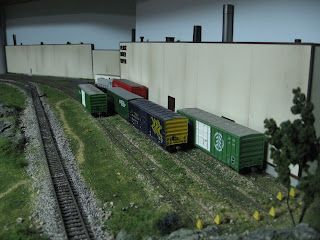 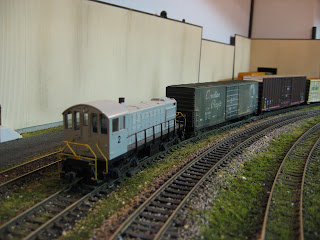 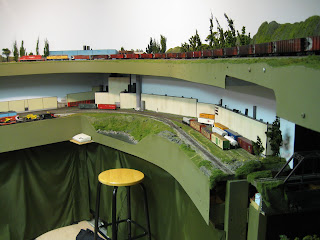 An overview of the Peace River paper mill.
Posted by JDL56 at 6:46 AM No comments: 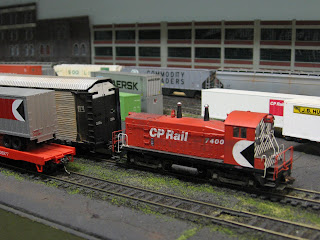 I have a confession to make: I don’t really like operations.

I have operated on friend’s layouts. It’s OK. But moving car A from industry B to yard track C has never really intrigued or intereseted me. Juggling a stack of car cards has never been that appealing, either.

I tried to make my first layout operations-oriented. I had a card for each car (colour-coded by type), a timetable, even a John Allen-like timesaver industrial area. But it always ended up that I’d rather just run trains.

When I built the CP Rail Manitoba & Subdivision, I decided not to worry about operations. Which isn’t the same as saying the layout can’t be operated—it can. But the goal isn’t switching individual cars; rather, it’s the movement of trains across the layout.

The layout is set up to represent the coming together of two lines into one line (like a Y). One line of the two lines goes east to Thunder Bay; the other goes south to Duluth, MN. They join in Fort Frances, Ont., where a single track goes west to Winnipeg. (This is the real-life route of CN’s former Duluth, Winnipeg & Pacific line, still in operation today.)

At Fort Frances, cars from the three destinations are taken off trains and added to them. Trains are blocked so that the cars that need to be removed or added are at the rear of each consist. I use a version of Jim Heidiger’s wheel report system to keep things moving: Operators are instructed to take off or add X number of cars from each train as it enters the yard. Cars taken off of trains can be put into any yard track they want. Operators can also take off as many or as few cars if they want, too—it doesn’t matter.

I also have an interchange at Nance, MN with the Peace River Northern (PNR). Cars for the PNR are dropped off at the interchange track for the various industries in Nance and beyond. After dropping off the cars for the PNR, the local picks up the cars headed back to Fort Frances and takes them back to the yard. The next time around, those same cars are taken back to Nance and dropped off at the interchange. The cars dropped off on the previous trip are taken back to Fort Frances—and so the cycle repeats itself.

In fact, no cars ever actually gets switched at an industry, yet it seems like there is lots of action. Simple, eh?

In fact, simplicity is my goal when it comes to operations. My approach isn’t for everyone; some purists, I’m sure, would be aghast. But it works for me.
Posted by JDL56 at 7:08 PM 1 comment:

Blogs I follow: Confessions of a Train Geek and Trackside Treasure

A couple of Canadian blogs I like to follow are Confessions of a Train Geek and Trackside Treasure.

You can find it at http://blog.traingeek.ca/

Another one is Trackside Treasure, by Eric. "Trips, trains and thirty years trackside with Canada's railways," he says at the top of the page. "100% Canadian Prototype Railroading. If you're looking for variety in Canadian freight and passenger railroading, with a retrospective flavour, you won't be disappointed."

You can find it at http://tracksidetreasure.blogspot.com/
Posted by JDL56 at 9:35 AM 3 comments: 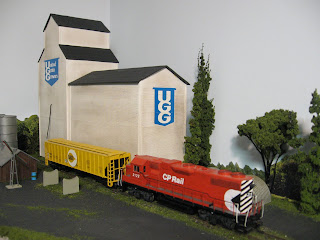 The UGG elevator at Turney, Manitoba.

Prairie giants . . . that's what the traditional wood crib elevators were called. Like giants, they were visible from a long ways away. To travellers, they were signs of civilization—wherever you saw a grain elevator, you knew there was a town. Even early aviators used them to help them navigate across the prairie provinces!

Since I am modelling the transition from the Canadian shield to the prairies, I needed grain elevators on the CP Rail Manitoba & Minnesota Subdivision. When I started building the layout, the only commercial kits available were much too small, so I decided to build my own.

As has been said on this blog many times before, I'm no expert craftsman or perfect modeller; my models will never win any contests. As with everything else I do on the layout, I strive for "good enough." Does it look like a prairie elevator? If yes, then it's good enough for me.

The method I like best for making elevators is to build a subframe out of foamcore, then glue on wood siding. (You could use styrene, too.) The trick is to make them big enough to be plausible—in real life, they are really tall—but not so tall as to dominate the scene.

The shingles are made from file cards, cut in strips and then cut to represent shingles.

The photos below show some of the construction process. 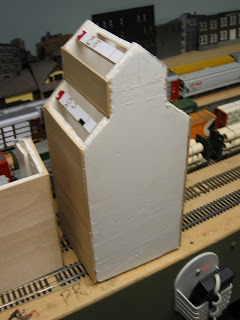 The elevator from the back, showing the
foamcore and the roof bracing. No back is
needed since it abuts the backdrop. 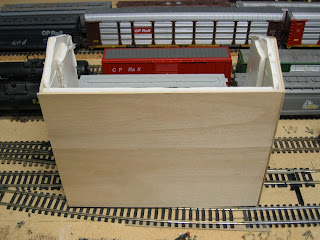 The annex from the front. 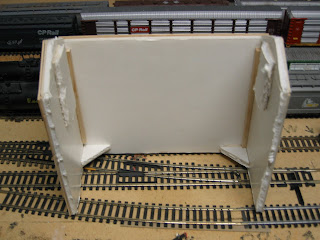 The annex from the back. No back is needed since
it abuts the backdrop. 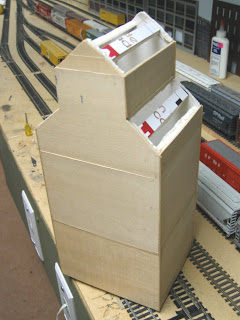 The elevator from the front. 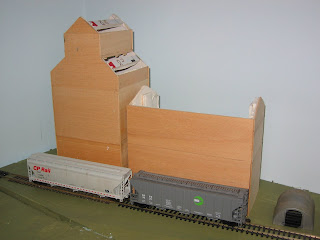 Before the roofs and scenery are added. 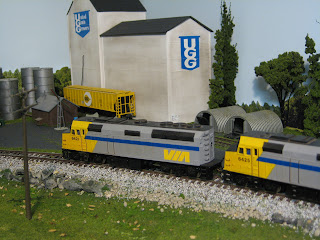 Another view of the elevator, with The Canadian
passing in the foreground. 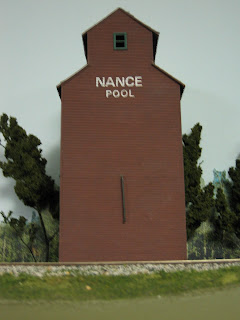 Another elevator built using a similar
method, this one at Nance, MN.
Posted by JDL56 at 7:22 PM 3 comments: 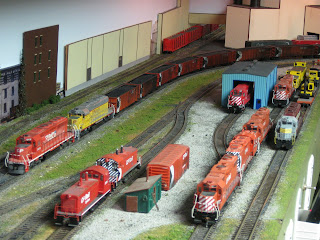 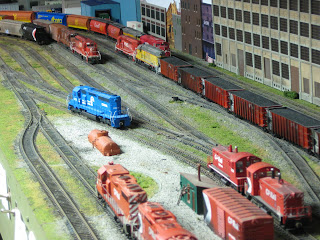 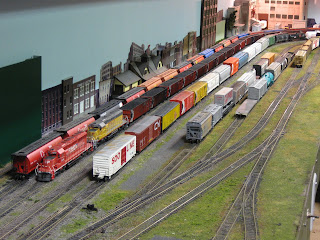 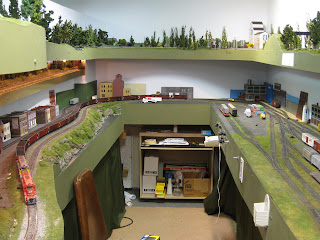 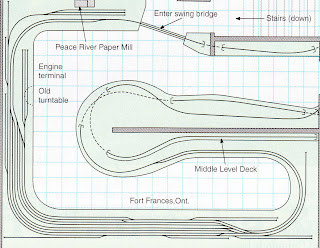 The yard trackplan, from Railroad Model Craftsman.
It's pretty close to reality.
Posted by JDL56 at 6:49 PM 1 comment: 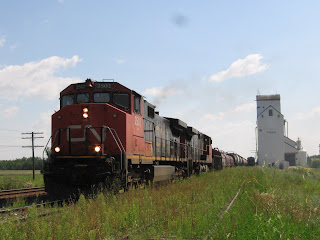 What could be more quintessentially prairie than a train and a grain elevator? CN 2502 and 2507, both Dash 9-44CWL units, lead a train out of the siding at Dugald, Manitoba, about 20 kilometres east of Winnipeg, on a fine morning in July, 2010.

Dugald is the site of one of Canada's worst train disasters. On this spot on Sept. 1, 1947, the westbound Minaki Campers’ Special hit a standing passenger train head on, claiming 31 lives. You can read more about the Dugald train disaster at http://www.mhs.mb.ca/docs/features/dugaldtraindisaster/index.shtml 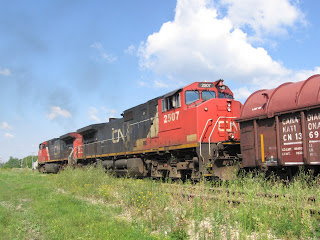 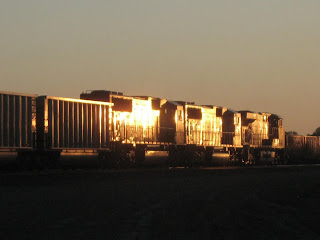 I thought these were sunset photos, until someone told me they're called "glint" pictures. (Although someone else suggested they were just backlit.) Whatever they are called, they look pretty cool to me. I took them in August along the BNSF mainline in Dillworth, MN. 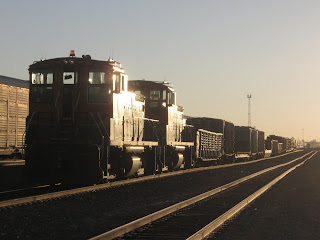 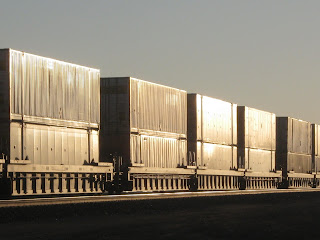 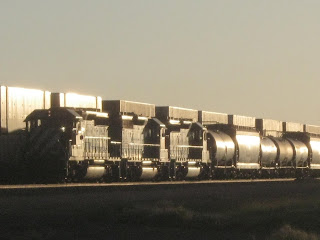 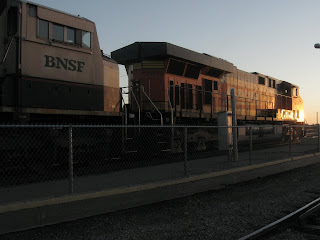