Going, going—no, it’s not all gone. But part of the CP Rail Manitoba & Minnesota Subdisivion is. I took down the centre peninsula this past week.

Why? It’s partly because of changing family circumstances; my daughter started university in fall, and we moved her room downstairs to give her more space and privacy. She moved into my old office, which left me without my own work space. The train room couldn’t accommodate a desk and fold-out guest couch—at least, not with the peninsula in the way.

But the other reason was that, for me, there’s nothing worse than a finished layout. As I think I have mentioned before, I enjoy building a layout more than running one (even though I like running trains). Taking down part of it gave me something to do on the layout, and will also give me some projects as I reconnect tracks and fix up scenery. Plus, it might make the layout better suited for operation—we’ll see.

There are losses, of course—gone are a couple of signature scenes, and some scenery I was fond of. But I took many photos before dismantling that area; together with videos of the layout (available at http://www.youtube.com/user/jdl562000), I will have lots of memories.

Plus, nothing lasts forever, as I noted near the beginning of this blog when I wrote about Tibetan Sand Mandalas and Model Railroading.

What's always amazing is how little time it takes to dismantle something that took years to build. A few hours after I started, all the track and scenery was gone. Over the course of a few days I unscrewed the benchwork. The photos below show the process. 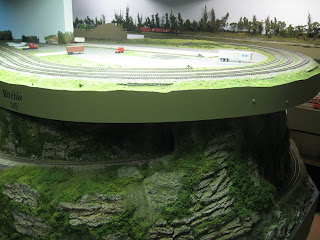 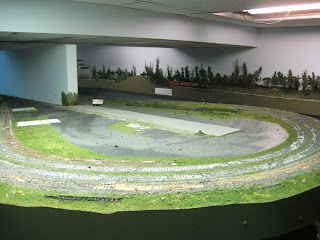 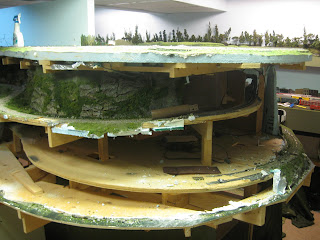 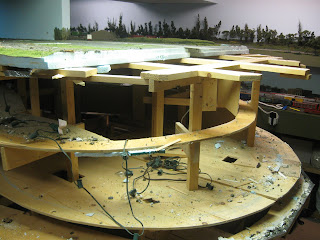 Getting down to bare wood 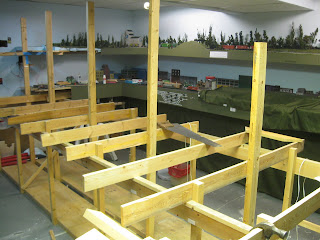 Nothing left but L-girder benchwork 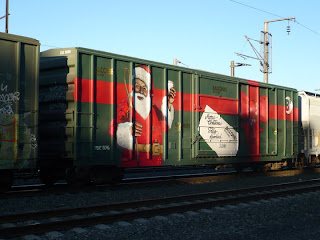 This Christmas box car was painted by Rei Alvarez, an artist in Austin, TX for the Balcones Recycling Company. The car is owned by the Texas and South Eastern Railroad. (#5096)

Alverez specializes in big murals; he painted the car this fall. He says on his blog that the car will be used on a Christmas card, too.

The photo on top is from Edgar Romero Roldán; the other two below are from Alvarez's blog. (http://rei74.blogspot.com/2010/10/balcones-recycling-austin-tx_20.html) 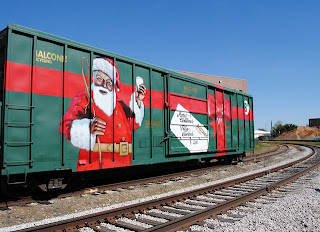 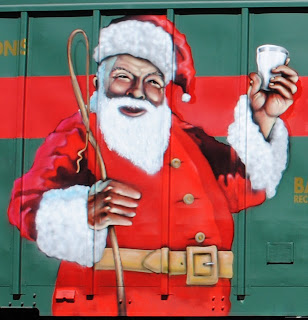 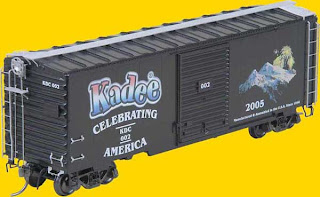 Dale Edwards is the owner and founder of Kadee Products. He is selling his complete collection of every HO Car that Kadee has made up to November, 2010. This collection includes all of the prototypical cars, collector/specialty series cars, and special run cars. There are 558 cars in all. 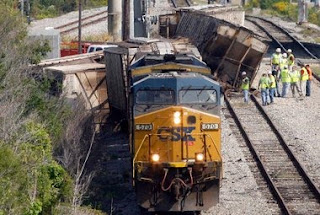 What are the chances of catching a derailment on video? That's what happened to a railfan in Metairie, LA in October.

The 91-car CSX train was headed to the yard when six cars near the front came off the tracks.

The derailment occurs 3:41 into the video. Check it out at http://www.youtube.com/watch?v=03Nq632eV6I&feature=player_embedded 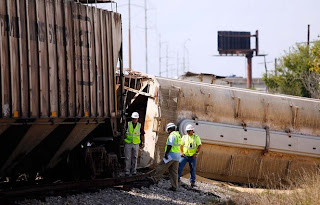 Top Events of the Past Decade 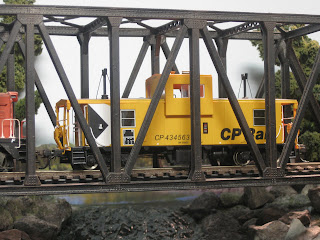 Rapido's Angus Van: One of the Top events of the decade.
As the decade (2000-2010) comes to a close, there’s a discussion on the Atlas HO forum about the top events of the past ten years. So far, here are some of the things that have been mentioned, and some that seem important to me (in no particular order):

The demise of kits. (Anybody buy a blue box car recently?)

The end of scratchbuilding. (See item above; when you can even buy buildings that are put together, who needs to build anything any more?)

Sound becomes standard. (Although not yet on the CP Rail M & M Sub., unless you count the sound of Athearn blue box locomotives.)

The end of horn hook couplers. (Now that all rolling stock comes with Kadees of Kadee clones, what am I going to do with all those packages of #5 Kadee couplers?)

The Union Pacific licensing issue. (Who knew we were infringing on copyright?)

The closing of hobby shops. (When’s the last time you bought something at one?)

DCC becomes mainstream. (One day I just might buy a system.)

The entry of Rapido Trains into the model railroad market. It instantly raising the bar for passenger cars and other rolling stock. (And let’s not forget ExactRail, either.)

The growth of model railroad forums. (For good or ill—mostly good, in my opinion, but there are some flame wars I can do without.)

Here in Canada, I would add the birth of the Canadian Association of Railway Modellers (CARM), created in 2003; the growing number of Canadian items in the model railroad marketplace (including the great models made by Rapido); the shift in the model railroad world from Toronto, which used to boast the largest model railroad show in the country, to Calgary and Edmonton, which currently host the largest shows; and the continuing success of Canadian Railway Modeller, which continues to publish six issues a year out of a home office.

Also in Canada, but on non-model railroad note, would be the CPR's steam program, and its holiday train, which highlight railroading in significant ways for many Canadians.

On Photography, or the Amazing Modelling of Josef Brandl 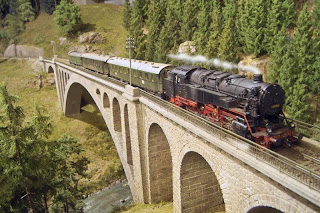 Sometimes someone will exclaim, hyperbolically, about how a model railroad photo looks "real." They almost never do, of course, even if the modelling is superb; there is always something that gives it away—the size of the handrails, couplers, track and ties; the static, expressionless figures; the trees and bushes; the backdrop, or something else.

Don’t get me wrong—I appreciate great model railroad photography. I aspire to take great photos of my layout. But photos, by their very nature, militate against good modelling. They force us to do exactly what we shouldn’t do when looking at a layout: Look intently, and with a singular focus, at a single scene.

Model railroads are best viewed following a train around a layout. When we do that, our brains fill in the gaps, based on what we see in our peripheral vision. Our brains tell us that the scene the train is passing through keeps going and going into the background; a closer inspection would reveal that it is only a cut-out from a magazine or calendar taped against a wall.

It’s all about illusion, in other words—sleight of hand, or sight, in this case, diverting our attention away from the areas that would spoil the fun and show us that it is, in fact, only a model.

Occasionally, however, a photo rises to the top. The modelling is so amazing that we actually do the proverbial double-take. Often, these are highly detailed micro-scenes; it would be rare for someone with a model railroad to devote that much attention to the whole layout—a “good enough” philosophy is all that is really possible, unless the owner has lots of time, skills or money (to hire a professional layout builder).

One person who seems to have two of those attributes—time and skills—is Josef Brandl.

I had never heard of him either until recently, while I was browsing model railroad photos on Google images. That’s when I came across the photos below.

This German model railroader is a professional layout builder. He is one of the best modelers I have ever encountered, when it comes to scenery.

As the marketing copy for his book, Almost Real: Josef Brandl’s Amazing Model Railroads puts it: “According to a not unfamiliar story, the Creator laboured for six days to create heaven and earth, and on the seventh day he rested. This book is devoted to world’s in miniature, created by Josef Brandl in 30,000 hours of work.”

Enjoy the photos. If you want more info about the book, go to http://www.einsatz-verlag.de/index_en.php You can also download a different chapter each month from that website. 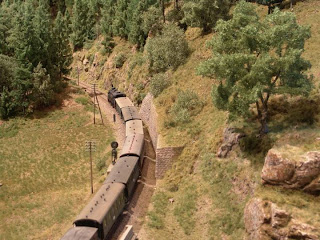 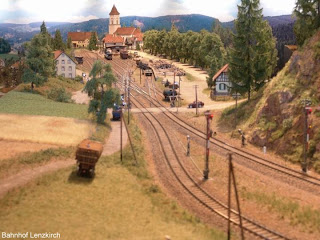 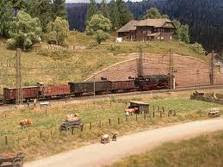 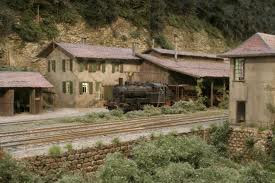 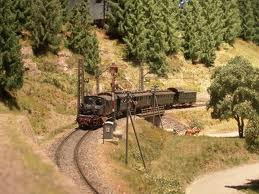 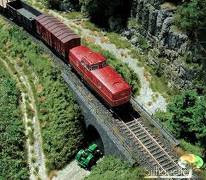 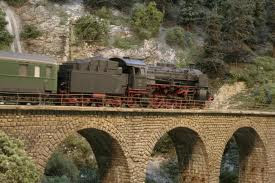 A few photos from a calendar featuring Brandl's work . . . . 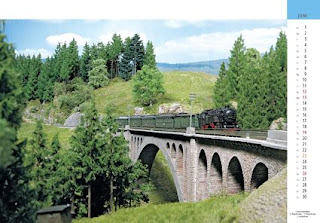 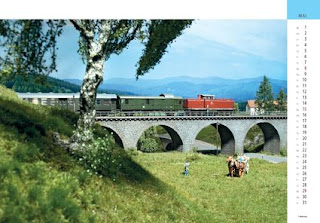 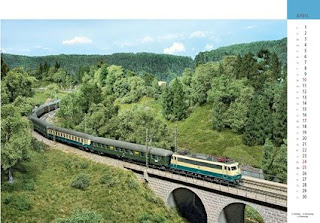 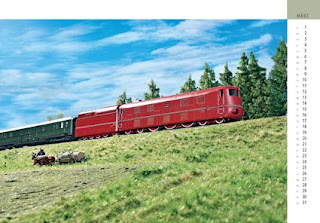