The Twin City Model Railroad has received a brief reprieve—it can stay in its present location at St. Paul’s Bandana Square until spring.

According to a report by CBS Minnesota, the Museum has worked out a deal with its landlord to remain open through March, 2016.

The terms of the deal include the Museum paying its $30,000 bill to the landlord, and paying full rent and other expenses starting in December.

After March, the Museum will look for a new location for the layout. However, the Museum’s toy train division, located in a separate building in Bandana Square, will close Nov. 2.

Now the big challenge facing the Museum is raising enough funds for the move and finding a new location. Museum officials estimate they will need $250,000.

Click here to read an earlier report about the Museum’s closure.
Posted by JDL56 at 11:01 AM No comments: 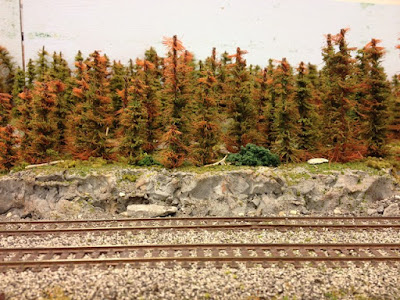 I’ve seen lots of photos of pine trees on model railroads, and many layouts in-person that feature them. But I’ve never seen this before—pine trees killed by the mountain pine beetle.

The scene is found on the Moose Jaw, SK Thunder Creek Model Railroad club layout. It shows, in model form, what is happening in real life across the western U.S. and Canada.

The beetle is a native insect that attacks pines in western North American forests. As of 2013, it had devastated forests in 19 western states and B.C. and Alberta in Canada. 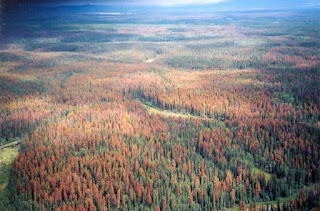 Outbreaks have occurred since the 1930s-40s. But the current epidemic in western Canada goes back to the 1990s. In B.C., the insect has killed about 50% of the total volume of commercial lodgepole pine.

Normally, the beetle plays an important role in the life of a forest, attacking old or weakened trees, and speeding development of a younger forest.

But hot, dry summers and mild winters throughout the region during the last few years, along with many years of wildfire suppression—which has led to an abundance of mature trees—has seen increased destruction. 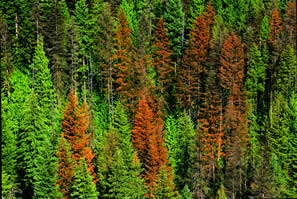 For those modelling the more modern era (1990s to present) in the western U.S. and Canada, it would seem necessary to have a few of these dead trees in the forest—unless, like those who model that era but who hate graffiti, they want to keep their forests, like their rolling stock, clean.

Learn more about the mountain pine beetle on the Natural Resources Canada website.
Posted by JDL56 at 5:44 PM No comments:

End of the Line for the Twin City Model Railroad Museum? 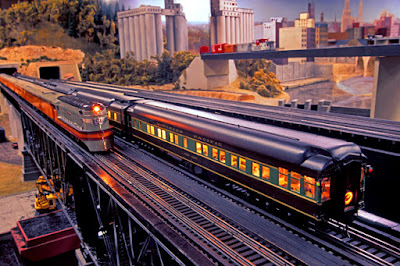 One of the best model railroad displays in the is facing closure.

The Twin City Model RailroadMuseum in —which features an amazing O scale layout of the Minneapolis/St. Paul area in the 1940s-50s—may have to vacate its home of 31 years as early as Oct. 26. 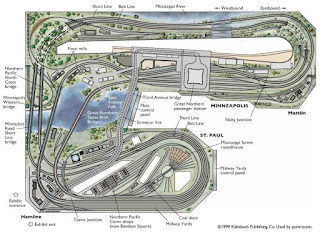 It was without a home until 1984, when space opened up in a new shopping and tourist attraction called (formerly the Northern Pacific Railway's old passenger car shops).

Unfortunately, the idea never really worked out. In 2003, the Square was sold to new owners and converted into office space.

The survived in two buildings: The layout is housed in one, and the Toy Train Museum, which has about 20 operating layouts plus displays, is in another.

Although the number of visitors has been increasing, the Museum has been unable to afford to pay its rent—it is $30,000 in debt. It is slated to close Oct. 26, but members hope to stay open through the Christmas season for its popular Christmas trains show so it can earn additional revenue. 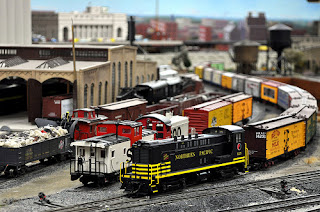 The Toy Train Museum, however, will close on Nov. 15.

What the Museum, really needs is a new and less expensive location; a fundraising drive has been started to help with that, and members are looking for a new place to set up.

Club members estimate it will cost about $50,000 to move the layout, to say nothing of the huge amount of work it will entail.

“We knew we were going to have to move and it's just unfortunate that it's happening now right before our busiest season,” said club spokesperson Brandon Jutz said, adding the current landlord has been flexible and willing to negotiate. 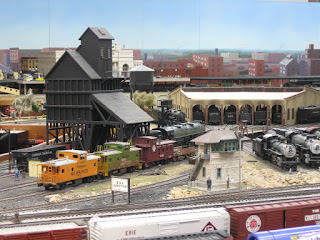 I have visited the Museum twice. In my opinion, it is one of the finest layouts in the U.S. I hope it can stay open for the rest of the year.

If it does stay open until the end of December, all I can say is that if you live near Minneapolis-St. Paul, or are planning a trip there soon, make sure you visit the Museum—it might be your last chance.

For more information, check out this article in the Minneapolis Start-Tribune.

Stephen Harper: A Boy, a Father and Watching Trains

This blog has been blessedly free from politics of any kind. But as Canadians go to the polls tomorrow, Oct. 19, to elect a new federal government, I've been doing some reading about the political parties and their positions.

While doing that, I came across something I had never known before: Our current Prime Minister, Stephen Harper, used to spend time as a boy watching trains with his father.

That information came about as I was reading a Toronto Star article about Harper’s life.

As a boy in Toronto, “some of his fondest memories are of walking to the old Leaside station with his father to watch trains come and go,” the article stated.

Curious to find out more, I found another article in the Star which talked about “the trainyards that captivated father and son; the whistle of the train in the night and their trips to the station.”

In the article, Harper is quoted as saying: "I always remember going there. It's one of those moments when I could see my dad standing there just as if it was yesterday, and what I look at now is remembering how young he was."

In a speech in 2013 on the occasion of Leadside's 100th anniversary, Harper said: "We could walk down to the railway station, which we regularly did, my dad, my brothers and I, where we would watch the trains come in from out of town."

Harper’s boyhood experiences with trains has no bearing at all on the election. I have no ulterior motive in sharing about it. It’s just one of those interesting things that has turned up as I was doing research in advance of voting.

I will add one more thing, though: If you are Canadian, make sure you vote!

P.S. In last night's election, Justin Trudeau was elected Prime Minister. I can't find anything about him and model railroads and trains, however.
Posted by JDL56 at 7:03 PM 1 comment: 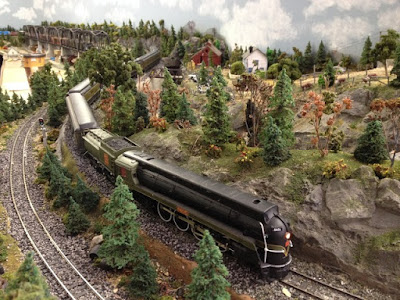 The Selkirk, Man. Model Railroad Association held its annual open house this weekend (Oct. 17-18). I went today (Saturday) to see the layouts (HO, N and O). Below find some photos from the HO layout. 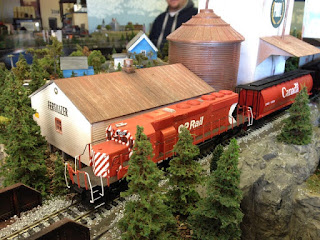 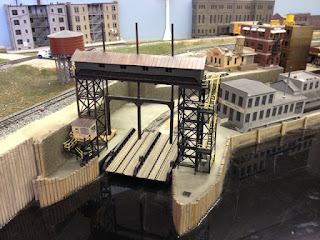 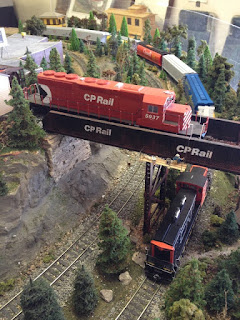 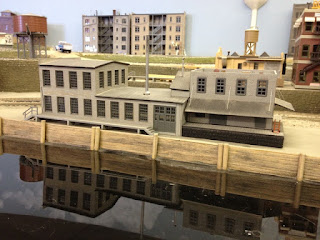 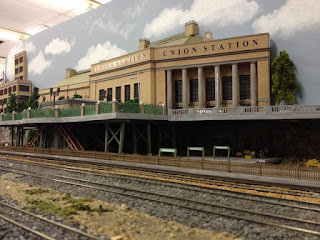 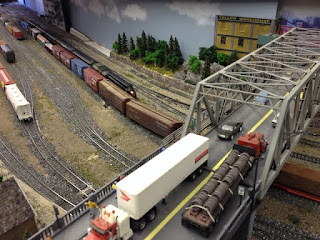 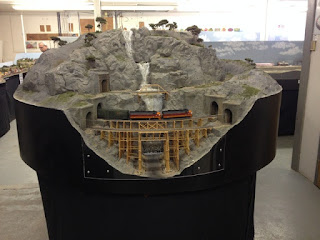 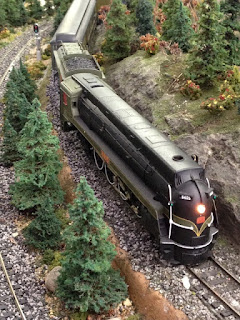 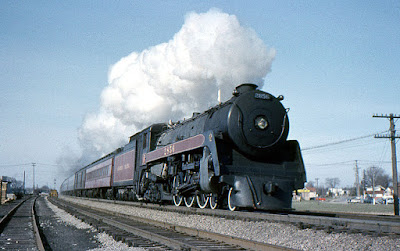 You heard that right--Rapido is making Canadian steam locomotives.

The company, owned by my friend Jason Shron, has launched Icons of Steam, a new line that will bring out ten iconic Canadian steam locomotives between 2017-23.

It will be followed by:

Six Weeks of Construction in Three Minutes: Another Video of the Thompson River Canyon Layout 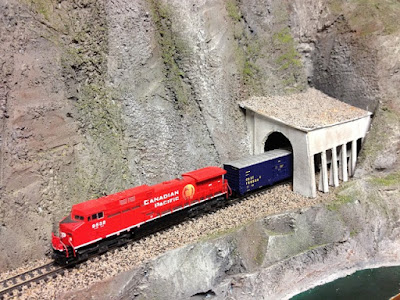 Another video! And just a day after the first one was posted. This time you can see the construction of the Thompson River Canyon N scale layout from start to finish in just over three minutes--from photos to video at the end. 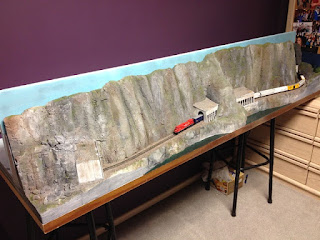 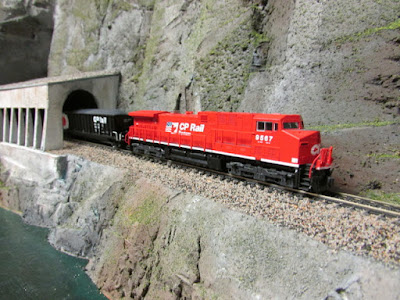 I haven't made a video in a long time--and when I finally do, it's not even of my HO scale Manitoba & Minnesota layout, but of the N scale Thompson River Canyon.

Since the Thompson River Canyon layout is only 2 by 7, and since it is only half done, it's only possible to make a short video--and I mean short. It's about 90 seconds, all-told. But it gives you an idea of what the layout looks like in operation. 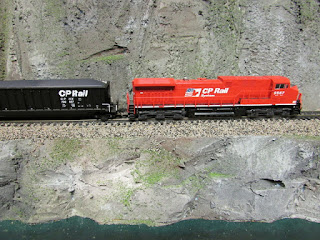 Where would be the best place for a model railroad clubhouse?

Close to the tracks, is my answer. That’s where the Winnipeg Model Railroad Club has its layout, at the downtown VIA station as part of the Winnipeg Railway Museum. 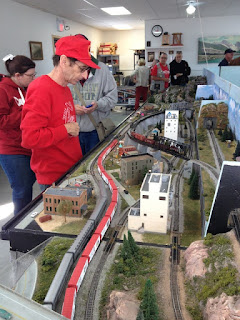 On a perfect Oct. 3 fall afternoon, they held an open house to show off their new clubhouse at the home of the Prairie Dog Central Railway.

The Prairie Dog Central is owned by the Vintage Locomotive Society. It runs regular passenger excursions that are often led by #3, a 4-4-0  steam locomotive built in 1882. It might be the oldest operating steam locomotive in North America. 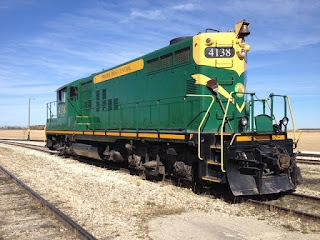 In addition to seeing WinNTrak’s layout, it was a great day to check out the two former Virginia Central steam locomotives that are temporarily parked on the Prairie Dog Central property. (Even if the sun was in the wrong place for good photography.) 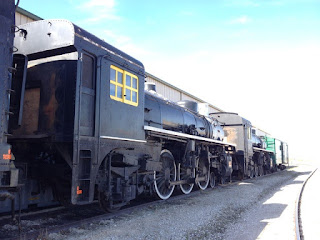 They were part of Jack Showalter’s Virginia Central tourist Railroad in Covington, Va., from the 1970s to 1990s. 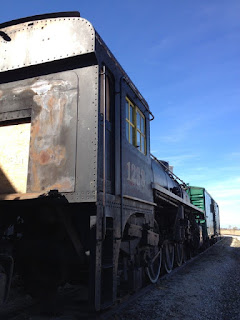 After Showalter’s death last year, the locomotives were purchased by an anonymous buyer from Alberta. They made their way to Winnipeg on the CPR's Emerson Sub., as the photo below shows.

According to a report, the units were purchased to be used in steam excursion operations, although it is not known where. They will be stored in Winnipeg until those plans are settled.

In addition to the two unique steamers, there were other units and rolling stock to see that day. 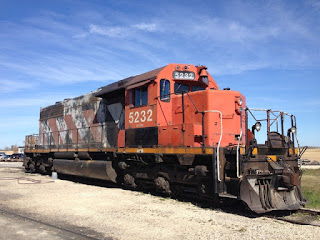 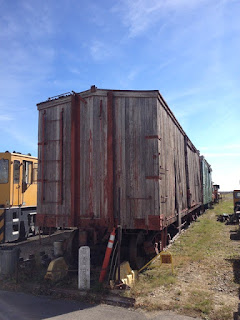 If you ever get to Winnipeg, make sure to check it out!

Thanks to Train Geek (Steve Boyko) for the photo by Jeff Keddy. See more of Jeff's photos of the steam locomotives in transit on Steve's blog. 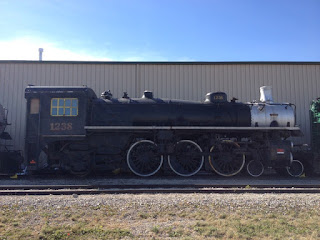 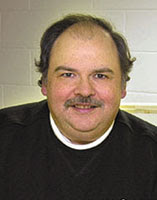 Andy had been part of the magazine for over 30 years. The cause of death was cancer and other ailments.

Andy started work at Model Railroader in 1979, becoming editor in 1993. Most recently, he was writing The Operators column. He edited Great Model Railroads since its inception.

I only met Andy once. I was in Madison in 2004. I asked him if I could get a tour of the MR&T layout and MR offices. Andy was an accommodating and gracious host.

He made a great contribution to the hobby. He will be missed.