Back in the Train Room or, The Gateway Spur is Back 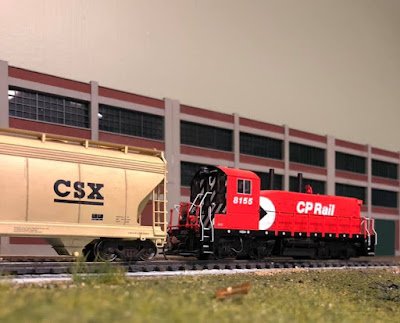 The layout never went away. But it has been dormant since March when the pandemic started. Somehow, I just lost interest in the hobby as the first wave of the virus swept North America.

Then, when summer came, I spent most of my time outdoors biking and doing other things. I spent no time in the basement.

Plus, there were plans to renovate the old train room—put in a new floor, paint and turn it into a spare bedroom/hobby/whatever room. 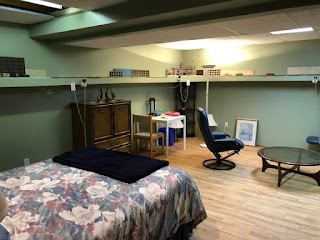 To get the room ready, I had to take down all the buildings for painting and put many other things away.

But that’s all done now. I’m back working on the layout. It feels good.

To reiterate (since it’s been so long since I last posted about it), the Gateway Spur is a short freelanced industrial layout along three walls of the room. 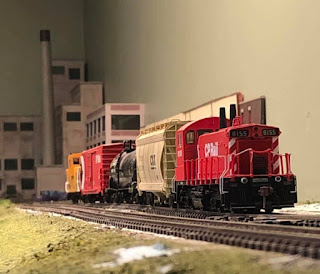 It replaces the old CP Rail Manitoba & Minnesota Sub., after which this blog is named. In fact, it uses two sections of the upper level of the old layout; so, in a way, the M & M Sub. lives on.

Set in the late 1980s, the idea behind it is seven industries (and team track) are located on a spur on the outskirts of a larger urban centre. They are serviced by a switch job that originates in the urban centre (fiddle yard) as an out-and-back operation.

Train lengths are 4-5 cars, plus a caboose.

Industries along the line are not yet fully determined, but so far I have a plastics business, a mill, a brewery, team track and several manufacturing companies. 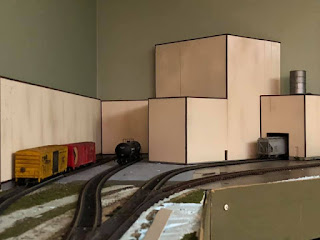 The brewery, with three tracks, is the largest industry on the line.

I use a simple homemade card system to determine which industries get switched during each session.

Over the past few weeks I’ve been troubleshooting the layout, getting things ready for scenery and ballasting. (There's still lots to be done to the buildings, including some repair.)

Unlike my previous layout, which featured a busy mainline with perfect track (or as perfect as I could make it), a little unevenness, crookedness and rocking-and-rolling by the train is perfectly acceptable on the Gateway Spur! 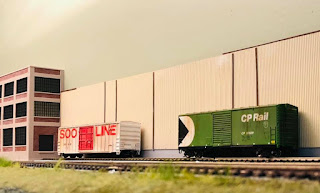 One thing I haven’t decided yet is whether I will bother with a backboard for a blue sky. One of the compromises with “management” was going with the preferred colour for the room (green). I might get software that enables me to add a sky to photos. We’ll see.

Also, the fascia will be painted a green trim different from the wall colour. That will have to wait until its safe to go to a paint store again. (We are in code red lockdown in Winnipeg now.) 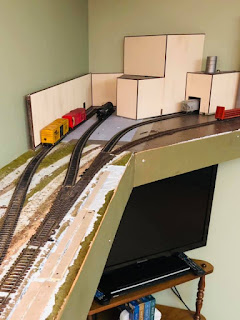 But I’m in no rush to finish anything; with such a small layout (compared to my earlier one, which filled the room and took decades to complete), it would be too easy to complete things. And then what?

Slow as she goes is the watchword; sort of like how trains operate on the Gateway Sub.

And maybe a bit of rocking and swaying, too. 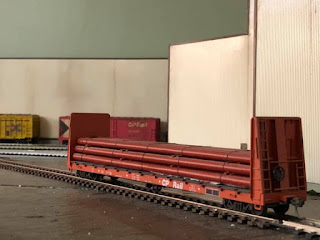 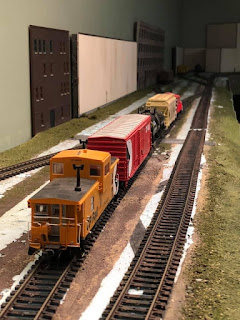