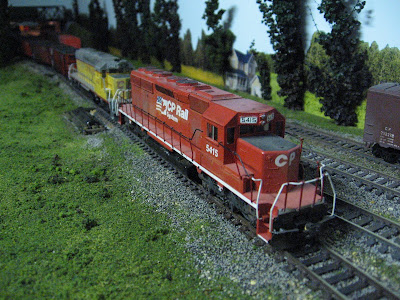 A train enters the layout from staging near the site of
the "last ballast." Can you spot the final one?

We all know about a last spike ceremony—the ceremonial driving of the last spike on real and model railroads signifying the end of the laying of the mainline. But what about the sprinkling of the last ballast? That’s less common, I bet. But it’s what happened in January on my CP Rail Manitoba & Minnesota Subdivision.

I began the layout in 1994. The mainline was completed a number of years ago, after which I began scenery. It took a while—15 years—but I finally got to the end of the line, to the last bit of track that wasn’t ballasted. It was about six feet long, running from the upper level town of Ritchie into the upper staging yard.

I had delayed finishing this area for a long time; it seemed there was always something more pressing that needed to be done. But over Christmas I began painting track, finishing scenery, installing the last bit of fascia and building a bridge to hide the hole in the wall leading to the staging yard. And then I started ballasting the track.

The completion of the ballasting of the mainline was a poignant moment. It made me think back to when I installed the first L-Girder so long ago. Back then, the room was empty—nothing but lumber and boxes of model railroad items. Now it is filled with an almost-completed layout.

As I sprinkled on the ballast, I thought I should maybe hold a “last ballast” ceremony. But there was one problem: How to tell which piece of ballast was the last one?

Since I didn't know, I just poured them all on and then, after a moment's reflection, poured myself a cold one.
Posted by JDL56 at 8:11 PM