The Recession and Model Railroading 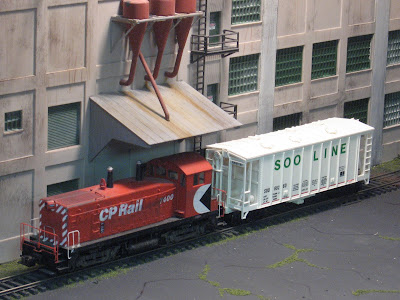 There may be a recession, but things are still
busy on the CP Rail M & M Sub.
There’s a recession going on, as most of us know. But you wouldn’t know it from all the new releases from model railroad manufacturers.

This seems contrary to conventional wisdom; surely spending on unnecessary items like trains would go down in a recession—right?

While some modellers may well be cutting back spending, economic downturns have not spelled disaster for the hobby industry in the past. Although the effects of the current economic troubles will vary from person to person and business to business, it is generally accepted that economic downturns don't hurt businesses that cater to hobbyists—at least, not as much as they hurt some other businesses.

Why? Economic insecurity may cause people to cut back on big-ticket items, like a Caribbean vacation or a new car. But they still need something to do during those long winter evenings—a $25-$50 model kit can fill the bill nicely; so can settling down for an evening of reading with your favourite model railroad magazine.

In fact, some people involved with the hobby industry have said that poor economic conditions actually help them, since hobbies become more important to people on a budget. Said one: "Although it’s early days, we’re expecting a good second half to the year. We continue to see the traditional model and hobby brands as being a safe haven in downturns."

Across the ocean, the same seems to be true. Last year, the British model and hobby internet retailer Ontracks reported a 67 percent increase in sales, despite overall "negative retail growth and falling consumer confidence.” Another British toy and hobby manufacturer, Hornby, is enjoying rising sales this year, something that company executives said showed its resilience to recession.

Another factor that affects model railroad sales is demographics. Most modellers are in the 50 and above; this means that they usually have more stable employment and greater disposable income.

As a result, one manufacturer told me, hobbies that cater to younger people, like RC cars, have big peaks and valleys (depending on economic conditions). The fluctuations in model railroad spending are less severe.

This isn’t to say that manufacturers of model railroad items aren’t keeping a close watch on their bottom line—they are. Uncertain times may cause them to choose to delay new projects that require large outlays of cash, at least until better times are forecast.

As for me, I wish all of model railroad manufacturers the best, and hope that they can successfully ride out these uncertain economic times. I’m afraid, however, that I’m just not doing my bit to help—with a nearly completed layout, and all the locomotives and rolling stock I need, I’m not buying much, if anything, these days, and don’t expect to be buying much in the near future.

But if anyone brings out a ready-to-run CP Rail Red Barn, or a chop nose GP9, I may just change my mind.
Posted by JDL56 at 4:54 PM