Choosing A Region, Railway and Era for the CP Rail Manitoba & Minnesota Sub. 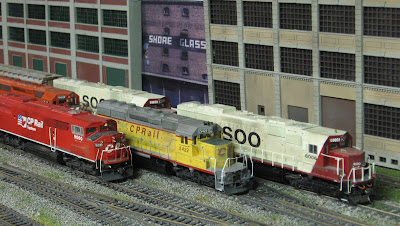 Locomotives in different early-1990s schemes on the
M & M Sub.

The CP Rail Manitoba & Minnesota Subdivision is set in the early to mid-1990s in Manitoba and Minnesota. Why that railway, time and place? And why choose to fix a model railroad in time and place at all?

My choice of CP Rail is sort of accidental. I grew up in a CN town in southern Ontario--a CN branchline ran near my house, and I never saw a CP Rail train until I moved to Winnipeg. You'd think that would fix my decision on which railway to model, but when I got back into model railroading in 1987 after an 11-year absence, there were more inexpensive CP Rail models on the market than CN. Since I wanted to model a Canadian railway, that fixed it.

Why the early to mid-1990s? That's partly because I really like SD40-2 locomotives, of which CP Rail had many. But it's also because I really disliked the newer power when it came out--I found the AC4400s and the SD70s and higher to be, well, ugly. (I've since grown more accustomed to them, but they still aren't my favourite units.)

By halting my layout's time period at 1995, I can run a couple of the newer AC4400 units, which were introduced about that time. But the mainstay of my fleet are the ubiquitous SD$0-2 locomotives, along with GP38s and SD60s.

Another reason for choosing this time period is that I can run a variety of locomotive schemes--multimark, no multimark, Twin Flags, plus SOO white and red and "candy apple." I can also run some unique units, such as a patched KCS unit or a Union Pacfic SD40-2 with the red CP Rail on the sides. (More about my roster in a future post.)

In the end, it all contributes the plausibility I am striving for in my modelling--I want the layout to look like it is a certain time and place. Keeping railway, era and region in mind helps me achieve that goal.

Finally, there is the financial reason for fixing a layout on a railway, date and place. No matter how good a model looks, if it doesn't fit the railway, place or era I model, the wallet stays in the pocket.
Posted by JDL56 at 10:54 AM