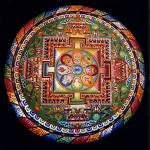 What do model railroads and Tibetan sand mandalas have in common?

A sand mandala comes from the Tibetan Buddhist tradition. Monks and devotees spend weeks or months creating amazingly intricate images out of millions of grains of coloured sand. When done, the mandala is ceremonially destroyed, swept away to symbolize the transitory and impermanent nature of material life.

Hmm . . . that’s not very different from building a model railroad, except for the part about ceremonial destruction.

The fact of the matter is this: A model railroad, no matter its size, will not last forever. Take my own model railroad, for example. The double-deck layout, which occupies a 17 by 20 foot room in the basement of my home, looks so permanent. And yet, one day, it will end up as a pile of lumber on the floor. All the years of work making benchwork, laying track, creating scenery, planting trees and everything else will be for naught—it will be gone.

It is—to sound all eastern and mystical—the way of all life, and of all model railroads.

Not even the most famous layouts survive. Tony Koester’s Allegheny Midland, Allen McClelland’s Virginia and Ohio, David Barrow’s Cat Mountain and Santa Fe and John Armstrong’s Canandaigua Southern are all gone, as are other pioneering layouts such as John Allen’s Gorre and Daphetid, Cliff Robinson’s Marquette Union Terminal (the only one on this list I was able to visit, back in the mid-80s when I lived in Dallas, TX), Whit Towers Alturas & Lone Pine and Frank Ellison’s Delta Lines, to name just a few.

Some were dismantled because their owners wanted new challenges; others came down due to changing circumstances or death. All we have left are some photographs, some articles and, for a lucky few, a piece or two of rolling stock, locomotives or buildings.

(I don’t know about you, but when I heard that the Allegheny Midland, the Virginia & Ohio, the Cat Mountain & Santa Fe and the Canandaigua Southern were gone, I felt a sense of loss—these were the layouts I had “grown up” with in model railroading. Reading about them shaped my modeling, and inspired me to strive for even greater proficiency as a modeler. Their dismantling almost felt like a loss in the family, or the departing of a good friend.)

I’m no stranger to dismantling a layout. I took down my first layout in 1994, after working on it for six years. The destruction, necessitated by the need to move to a larger home, was not totally unwelcome—like many first-time layouts, it had some serioius flaws. And yet, it was sad to see it go, and amazing to see how quickly it went; after spending a week removing the track, buildings and scenery, it took three of us just about an hour to reduce it to a pile of lumber on the floor.

Even though I realize that my present layout will, like my first, also go the way of all model railroads, I’m not deterred. I happily spend hours doing fine detailing—making the ballast look just so, moving a tree an inch to the left, sprinkling a bit more ground foam over there. Like the monks who make sand mandalas, I too labour on, although I expect my “artwork” to last a lot longer than a few days or weeks. (So far, it’s been 15 years.)

One day, the CP Rail Manitoba and Minnesota Subdivision will be gone. Perhaps it will be because I want a new challenge. Maybe it will be because of a move, or for some other reason. Whatever the cause or date of its demise, I will look happily back at the many enjoyable hours I have spent on its creation—and maybe even absorb a lesson or two about the transitory nature of life. 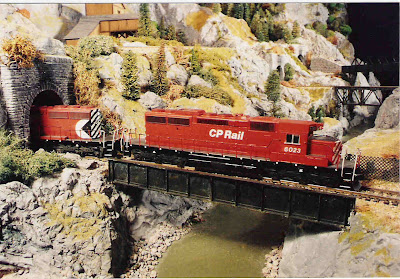 A photo from my first layout, the CP Rail Grimm Valley Subdivision. Gone, but not forgotten.
Posted by JDL56 at 8:45 PM