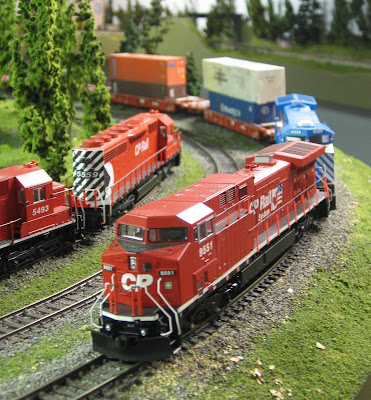 Note: Since this was written, some changes have been made to the layout. Click here to see them. Click here for an overview with photos that includes links to other posts about the changes.

Since this blog is titled the CP Rail Manitoba & Minnesota Subdivision, I suppose I should say something about it! For a video tour, visit An Overview of The CP Rail M & M Sub. on YouTube at http://www.youtube.com/watch?v=BrkeyhOKBYk

The double-deck layout occupies a 17 by 20 foot room, with a 5 by 11 food storage room that contains the helix and staging yards. It represents a cross-border route from Winnipeg to Duluth, Minnesota via Fort Frances, Ont. (a route that is, in reality, operated by CN; watch for a future blog on fiction vs. faction). It takes about nine minutes for a train to traverse the 230-foot long point-to-point main line, which is fed by two six-track staging yards at either end.

The lower level is L-girder style construction, while the upper level is made from two-inch thick Styrofoam suspended from the wall. The roadbed on both levels is cut from 1/4 inch cork, bought in rolled sheets at a local home renovation store.

The layout uses conventional DC (or Dinosaur Control) and locally-made walk-around throttles to control the trains; four trains can be operated at the same time. The main line is controlled by a dispatcher in the storage room, while all of the tracks in Fort Frances are controlled by the yardmaster.

None of the switches are electrified, except for a few in the staging yard, and there are no signals. In this I am following the practice of one of his favourite prototype routes, the CPR’s Weyburn Sub. between Moose Jaw, Sask. and Portal, North Dakota. This busy single-track main line is dark (unsignalled) and all the switches are thrown by the train crews.

The layout is set in the early to mid-1990s. This is a time when the SD40-2 is still king; the newer AC 4400s have not yet begun to make an appearance. This allows me to run of CP schemes—multimark, no multimark and Twin Flags, along with SOO line units in white and red and candy apple liveries.

The motive power is mostly Athearn blue box, with a few Kato and Proto 2000 units. Rolling stock is a mix of Athearn, MDC, InterMountain, Atlas, Accurail, Walthers, with some Tyco and Life-Like thrown in.

Also, since I am modelling the early 1990s, there are no cabooses, although a few can be seen in the middle of trains—headed for off-layout scrap yards.

Operations consist of trains traveling between Duluth, Thunder Bay and Winnipeg. The line sees unit coal, grain, piggyback, double stack and forest product trains, as well as mixed freights which drop off and pick up cars in Fort Frances. Additional operational interest is provided by the Peace River Paper mill, which occupies an eight-foot long area; the mill, which has its own switcher, receives cars twice each session to spot in the five mill tracks. There is also a local that serves 12 industries in Fort Frances, and a wayfreight that switches an interchange and seven industries along the line.

The line also hosts VIA’s The Canadian, detouring from its usual route on CN. Every now and then it also sees a private owners’ train, made up of a colourful mix of passenger equipment from various U.S. and Canadian railroads.

Operations are governed by wheel report system and sequence schedule. It can take me several days or several weeks to run the schedule. (I mostly operate by myself.) Sometimes—many times—I just like to run some trains.

Scenery is made from extruded Styrofoam, carved to shape. I like this method Because it is less messy than using plaster, and also because it allows me to make below grade scenery effects—with Styrofoam it is possible to carve out gullies, ditches and undulating ground, just lie on the prototype.

As for covering the Styrofoam, I don’t use plaster or any other kind of mud or goop. Instead, I just paints it using a mix of brown, grey and black paints, and then add ground foam. The rock work is made from tree bark, which he gathered along the banks of Winnipeg’s Red River after spring runoff. (Look for a future article in Model Railroader on this subject.)

My philosophy of model railroading is GEF (pronounced “gefel.” It stand for “Good Enough For Longhurst.” (Others call this the “three-foot rule.) To me, it doesn’t matter if locomotives don’t have the proper number of louvers, the right-size fans, the correct length nose or any other such thing (although I have lightly “Canadianized” some of my units by adding a nose headlight and raising the bell above the cab windows).

My modelling will never win any contests; I’m OK with that. I’m striving for plausibility, not realism—if visitors come away from the layout thinking it looks like they are watching CP Rail operations in the early 1990s in Manitoba and Minnesota, I’ve achieved my goal.