Last Week to Order The Canadian 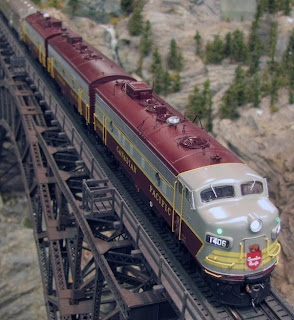 There's only a week left for those who want to order The Canadian, the gorgeous new offering from Rapido Trains. All orders must be in by August 5, 2011.

I've seen the train, and I can say that it is one of the most detailed and impressive HO scale models I've ever viewed.

And lest you think I am a Rapido Trains company shill (OK, maybe I am a bit), as impressed as I am with the set I'm not even going to buy one--it doesn't fit my era. That doesn't mean I can't admire it, though.

(On the other hand, being a friend of Rapido Trains ovner Jason Shron, it's been great to watch his company grow from a dream to the incredible reality is has become; you can read about the origins of the company here.)

And another thing: After taking The Canadian on a cross-Canada tour, Jason discovered a pent-up demand for the model in CP Rail Action Red. The result? He decided to make it in that version, too; see a sample below.

You can read more about The Canadian, and find order information, in the latest Rapido Telegraph.