Get Paid to Play With Trains? 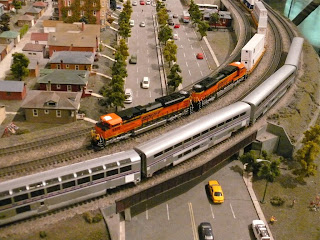 Want to get paid to play with trains?

The Great Train Story at the Chicago Museum of Science and Industry is looking for someone who can work full-time on the layout. Model railroad repair experience is a definite plus, and you need to be a people person. You also need to have no qualms about only seeing the BNSF swoosh exclusively on trains all day. (BNSF is the major sponsor.) Living in the immediate Chicago metro region is neccessary, too.

For more information, visit the Atlas HO Forum. (Forum link: Most Wonderfulest Job in the World.)

But before you drop everything, quit your job and move to Chicago, a cautionary note: Be careful what you wish for. Like anything else in  life, too much of a good thing can seem like drudgery--even trains.

I learned that lesson many years ago, when I started scratchbuilding wooden grain elevators ("prairie giants"). I made one for myself, then one for a friend as a gift. Others saw them, and asked me to make them some for money.

Why foolishly? What had previously been a pleasant diversion now became a job, loaded with expectations and timelines. ("Is it ready yet?) Instead of looking forward to budiling elevators, it became a chore--one I would rather avoid.

After finishing my last elevator for cash, I closed the business.

A friend who started a model railroad magazine has a similar story. Before he created the publication, he had a layout in his basement. Now he has no layout (the magazine took over all the available space), and no time for modelling. And, somedays, no interest either. (It's hard to think of playing with trains after working with trains all day.)

All the same, being part of the Great Train Story would be cool--at least for a little while. 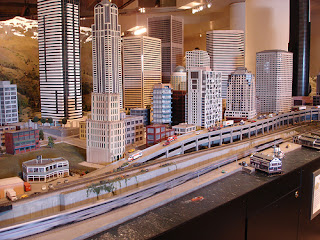