An interview with Jason Shron of Rapido Trains 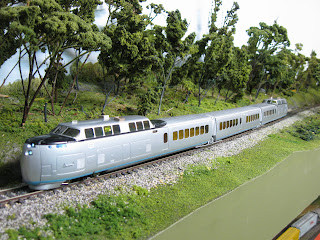 One of the people I count myself lucky to be friends with is Jason Shron, founder of Rapido Trains. It's been great to follow the progress of the company from the start, and to watch it flourish and grow. Earlier this year I conducted a short interview with Jason about Rapido Trains. In the photo above, Rapido's UA Turbo visits the CP Rail Manitoba & Minnesota Subdivision during a visit by Jason to Winnipeg in 2008.

In 2003, Jason Shron was doing a Ph.D. in art history at the University of Birmingham in England. Like a true railfan, he incorporated railways into his studies; he was researching the effects of early railway development on the depictions of the 19th-century landscape, with a plan to become a professor of art history.

He was supposed to be concentrating on his studies, but all he ever thought about was VIA trains. He abandoned his studies to start a model railway business—Rapido Trains Inc. This may be a loss for the art history world, it's been great for model railroaders—we’re the ones who are benefiting from all the great products he's produced.

Jason, 33, is married to Sidura Ludwig, an accomplished novelist from Winnipeg. They live in Toronto and have two children: Boaz, 3 and Dalya, 1.

When did you start Rapido Trains?

Jason: I first stayed in Winnipeg for a couple of days in February, 1996, on my way to Churchill. I spent all of my savings at the time on a trip to Churchill to ride in ex-CN steam-heated equipment. I arrived on The Canadian only to discover that the HEP equipment had arrived. The station master told me they would put steam on the next run if I stuck around for a couple of days. So I stayed at a cheap hotel in downtown Winnipeg, spent a lot of time walking the streets and at the library, and went out to Churchill two days later. I fell in love with Winnipeg.

When I met Sidura, at York University in 1998, I couldn't stop talking about how much I enjoyed winter in Winnipeg. I was the first Toronto guy she had met who hadn't made fun of "Winterpeg" as soon as he heard her mention it. I lived in Winnipeg in the summer of 1999 and the summer of 2000. I've been back several times a year since.

What kind of layout are you building?

Jason: I am building a double-deck layout of CN's Kingston Sub between Toronto and Pickering (lower deck) and Kingston and Brockville (upper deck). The layout's physical plant is set between 1977 and 1982, so Spadina Yard and roundhouse comprise over a third of the lower deck. Since I am a fan of all VIA trains from 1976 (VIA-CN) to the present, I plan to have a roster of VIA equipment throughout its history so I can have some more modern operating sessions on occasion.

My emphasis is on VIA operations: switching Spadina and Union, mainline running between Union and Brockville, and switching Brockville. There will be little if any freight on the lower level. Eastbound freight trains from the York Sub staging join the lower level at Liverpool Junction, just before entering the helix to the upper level. Most of the freight action will be centred on Manitoba Yard in Brockville and on the CP interchange there.

As my love is riding VIA trains, rather than just watching them (I almost never go railfanning unless there is a ride on VIA involved), I am converting half of my basement into a full-size mock-up of a VIA coach. I am fortunate to have plenty of surplus VIA equipment such as seats, windows, upholstery and carpet.

The layout room preparation will begin this spring, but I have been working on the train car for over six months already. It should be finished in 2010 or 2011.

What are some of the biggest challenges and obstacles you have faced in starting your company?

Jason: The biggest challenges have been financing and quality control. Model trains is a very capital-intensive industry. You need to spend thousands on tooling costs (not to mention overhead and advertising) before you bring a product to market.

Quality control has proven difficult because I have been pushing the envelope on what can be done. Your average passenger car has 50-100 parts. Rapido cars have about 200, and most of them are tiny pipes or valves under the car. It is hard to ensure that everything is put on straight or that enough glue is used to keep the part attached without having a big visible glob of glue showing. It's very tricky.

One of the biggest challenges in manufacturing model railroad items like passenger cars is matching the paint on the prototype. Why is that? What do you do to meet that challenge?

First there is the issue of scale. A full size paint chip will often look too dark on a model, because when we look at a model we are effectively looking at a real train through several hundred feet of atmosphere.

Then there is the issue of matching paint colours. Ignoring the fact that colours changed due to weather, sun, etc., often the colours straight out of the paint shop varied depending on when it was painted and where. There are easily half a dozen different shades of VIA blue, all of them accurate.

Our biggest challenge when it comes to paint colour has been VIA yellow stripes and CN light grey. I think we've finally solved both of those issues, and all future cars will have much more consistent colours.

You have said that one of your favourite things is making the extensive under body details on your passenger cars. Why is that? Why bother with something that so few people see?

Jason: Because they are there. I see our models as faithful recreations of the real thing. I won't add piping that's hidden in the walls or floor, but the under body details---things like AC equipment, poop chutes, steam pipes, etc.—are what made real passenger cars work.

When I was a kid I would buy skirted models of passenger cars and rip off the skirts to make more accurate VIA models. When I did that, I was always disappointed by the paucity of detail under the cars. Being a VIA fan, this detail was always very apparent when standing on the station platform. I try and recreate those memories in HO scale.

Why did you want to make a model of the Turbo?

Jason: A model of the Turbo has been a dream since I received my first HO scale train set at the age of four. This model has been a real challenge, and has taken several years to develop. Here’s a hint to prospective model railroad manufacturers: for your first powered model, don’t choose the most complex model train ever made. Because no Turbo was preserved, I see the model as the closest thing we will ever have to a preserved Turbo. This means that the bathroom sinks have faucets, even though they are entirely invisible. Even the cab controls are based on the real thing.

Your products have received a lot of praise in the model railroad press and on Web forums, but also some criticism. How do you handle the latter?

Jason: Honesty. When we screw up, I admit it, apologize for it, and try to make it right. We are very good about answering customer questions and complaints in a timely manner. If everyone is happy with our models, we're happy.

What are the biggest challenges facing a manufacturer of Canadian model railroad items?
Jason: The size of the market. The only way we can afford to make Canadian passenger cars is to paint the cars into numerous fictitious paint schemes. We're honest about this. If someone asks if he should get my baggage car in Erie or the Intermountain one, I tell them to go with Intermountain. Ours is a more detailed car, but it's a model of CN's baggage rather than the Erie's. The Intermountain car is based on the Erie baggage car.

What advice would you give to someone who thinks they want to become a model railroad manufacturer?

Jason: The old axiom is that if you want to make a small fortune in model trains, start with a large fortune. You need very deep pockets or very wealthy investors to be a successful model train manufacturer. If I said you should budget half a million dollars to get started, I wouldn't be exaggerating. 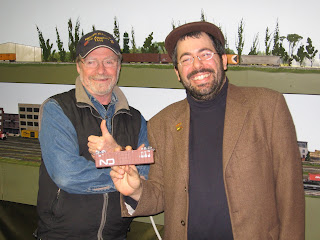