Remembering My Father On The CP Rail Manitoba & Minnesota Subdivision 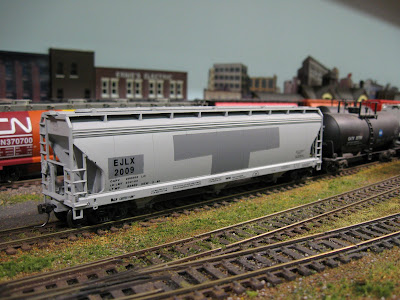 EJLX 2009 awaits its next move in the Fort Frances,
Ont. yard.
My dad died in February. Although he was never a model railroader, he indulged and encouraged my love of trains. From wind-up to Lionel to Tri-Ang to HO to N, he bought me trains for birthdays and Christmas (along with my mother, of course). He built my first train table—a wobbly 4 by 8, when I was just a boy. He was a terrible carpenter, but I didn't care—I had a place to build my “empire.”

Although he is gone, I can remember him whenever a certain car glides by on the CP Rail Manitoba and Minnesota Sub. It’s a former Milwaukee Road covered hopper, painted out and re-lettered EJLX 2009 for Edward John Longhurst (2009 being the year of his death). It's not the only memorial car on the layout; I also have DRDX 7104, an ex-BNSF covered hopper made in memory of David R. Dyck, a good friend and fellow model railroader who passed away in 2004. (71 was the age he died, 04 was the year.) 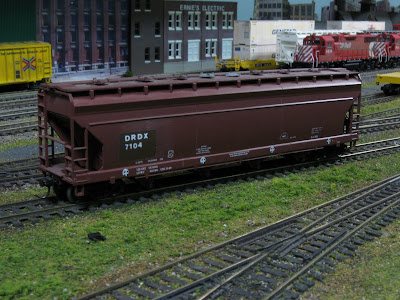 The practice of naming towns and buildings on layouts in honour of friends and family is longstanding; in my case, the towns of Nance, Ritchie and Turney all are named for model railroading friends, as are buildings such as Ken’s Model Trains, Epp’s Bibles & Books and Hiebert’s Gun & Tackle. (All of them still very much alive, thankfully!)

Lettering cars as a way to remember friends is not as common, but is easy to do. And it can be prototypical, too; the prototype today has a seemingly inexhaustible list of private reporting marks—you name it, you can find most any combination of three letters followed by an “X.”

Making the cars was easy: All that was needed was some masking tape, spray paint (gray or red primer) and CDS dry transfers. Neat, straight lines are not essential; see the prototype for examples.

In the case of the two cars mentioned above, both EJLX and DRDX are prototype reporting marks—the first belonging to Geo-Energy Ltd., the second belonging to the Duredo Company (John H. Grace Co.). I don't know if either company has or had covered hoppers, but it doesn't matter; it’s my railroad, and I can give cars any name or marks I like.