New Use For Old Cabooses 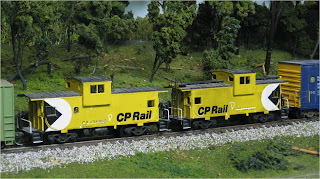 A couple of vans on their way to the scrapper
on the CP Rail Manitoba & Minnesota Sub.

Since the CP Rail Manitoba & Minnesota Sub. is set in the early to mid-1990s, there are no cabooses (or vans, as we call them in Canada) at the end of trains. But that doesn’t mean you won’t find them on the layout—you will. They just aren’t where you’d expect them to be. They are in the middle of trains, on their way to the scrapper.

In this case, the cabooses from around northwestern Ontario and southern Manitoba (the area I model) are being gathered up and are traveling over the M & M Sub. to off-line scrap yards. The cabooses I use are from various manufacturers, and don't look anything like the real ones (something that will change once the new vans from Rapido Trains come out).

To show that these cabooses have been stricken from the roster, I simply run a white line from a dry transfer set or gel pen through each car’s numbers. I also add the letter “D,” for "Derelict."

But where should derelict cabooses on their way to the scrapper be placed in a train? Photos of the prototype suggest they can be located in the front, middle or near the end—it doesn’t matter. A retired CN employee confirmed this, saying that there didn’t seem to be any rules regarding placement of cabooses in consists when he worked for that railway.

At first, seeing cabooses in the middle of a train looked strange. But I got used to it, just as I got used to not seeing them on the end of trains.

P.S. Thanks to Adam Meeks for pointing out that there are restrictions on caboose placement in a train. It seems a caboose headed for the scrapper could indeed be placed at various points in a train, provided the tonnage did not exceed a certain amount of tonnage behind it. (See his full comment below.)
Posted by JDL56 at 1:46 PM