How the Railway Came to Winnipeg


Until 2005, a lightly-used and unremarkable CPR branchline ran near my home in northeast Winnipeg. What most people didn't know is that the line was the reason Winnipeg became the province's largest city in the first place. I wrote this piece for the Winnipeg Free Press on August 27, 2005.

I live in Winnipeg, Manitoba, a city created by the railway—in this case, the Canadian Pacific Railway. Because the CPR chose to cross the Red River in Winnipeg, this city became the biggest in the province, and the provincial capital, as well.

It wasn’t supposed to be this way. The original plan called for the railway to cross the river to the north, at Selkirk, Man. How the railway ended up crossing the river near the confluence of the Red and Assiniboine rivers is a tale—a tale of two cities, if you please.

It all goes back to the late 1800s, when the Canadian government began building the transcontinental railway to link east and west.

Plans called for the new line to go through Selkirk, which was considered a superior location for crossing the Red River due to its stable riverbanks and safety from floods.

Unlike Winnipeg, which had flooded seven times in the previous 100 years, Selkirk had not experienced any major flooding, including during the disastrous flood of 1826. This made it a perfect place for the railway to cross the river.

The people of Selkirk were elated; it was poised to become a rich community. Says the city’s website: “The proposed crossing created a boom town in the autumn of 1879, complete with frenzied building.”

About that time Winnipeggers, realizing that their community would be reduced to a backwater if the railway stayed on its more northerly course, sent delegations to Ottawa to persuade the government to change its mind.

To sweeten the pot, the city offered $200,000 toward the construction of a bridge across the Red River at Winnipeg. It also offered to exempt the railway from taxes on any railway buildings or grounds in perpetuity.

In 1881, the CPR accepted the offer. The line, which was headed toward Selkirk, was abruptly turned south toward Winnipeg, following the Red River until it crossed it near the present-day Louise bridge in the downtown core.

According to Fred Headon, author of the book The Railways of Winnipeg, Volume One, “the deal offered by the city of Winnipeg—for free land for the station, yards and shops, no taxation in perpetuity and a bridge over the Red River—was sufficient to re-direct the main line southward.”

The coming of the railway, he says, “guaranteed a population explosion, commercial dominance and rapid industrialization.”

And that is what happened. The coming of the railway caused land values in Winnipeg to skyrocket. And the city grew; by the early 20th century, Winnipeg was the third largest city in Canada, with a population of 163,000.

But while Winnipeg boomed, Selkirk languished.

Writing in 1911, a Selkirk resident bemoaned the decision to run the line through Winnipeg, noting that it “sounded the death knell to Selkirk as a great metropolitan area.”

He went on to say that “many mistakes have been made in the settlement of Manitoba and the Northwest, but none that will cause so much eventual regret as the failure to build the city of Winnipeg at Selkirk.”

Selkirk is still smarting from the loss. “Unfortunately, the crossing was wrestled from Selkirk by political manoeuvrings of Winnipeg speculators,” it says on its website. “This devastated the town and, in August, 1881 . . . the town was almost deserted.”

Today, the CPR still dominates Winnipeg, with its huge yard and shops dividing the city from north to south—all of which it pays taxes on, the original agreement having been rescinded some years ago.

As for the old right of way—the one that transformed Winnipeg and sidelined Selkirk—it’s gone now, torn up in 2005.

Today the old line is a walking trail, and I bet that few people, if any, realize that it is responsible for the creation of the city of Winnipeg today.

For more information, see Railways in Winnipeg, Volume One by Fred Headon, or read more about this tale at the Manitoba Historical Society website at www.mhs.mb.ca/docs/transactions/3/railsacrossthered.shtml#19

The 1891 map below from Natural Resources Canada shows the old line that turned south toward Winnipeg and bypassed Selkirk in light blue. The bolder blue line is the present mainline, which angles toward the city from when the CRP straightened out the line with the Molson Cutoff.) 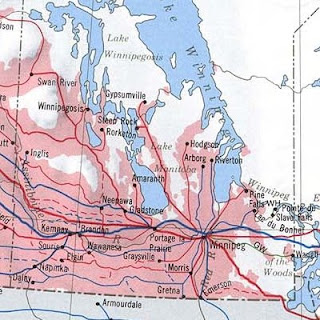