Modelling the mid-1990s gives me a chance to model a varied assortment of power on the CP Rail Manitoba & Minnesota Subdivision. This includes three unique units of U.S. ancestry that found their way to CP Rail.

First up is SD40-2 5417, (ex-KCS 672) which was acquired by the railway in 1992. To make it, I followed the example of the prototype. I bought a KCS unit (Athearn blue box), and proceeded to remove the KCS lettering and numbers.

I then masked the area below the cab windows and gave it a patch of primer, after which I added the numbers. CP Rail lettering was also applied to the body. Photos of the prototype can be found at http://www.trainweb.org/galt-stn/cproster/locomotive/5400s/cp5417.htm 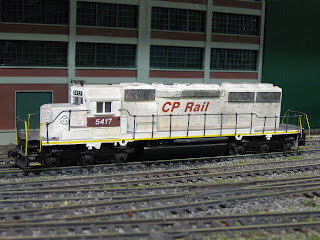 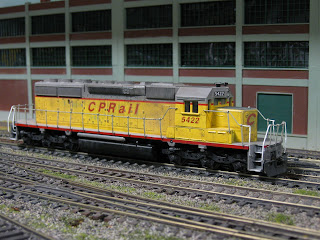 I bought it from friend Marty Weeks, who added the high nose to the unit; it was painted and decaled by another model railroad friend, David Enns. Prototype photos can be found at http://www.trainweb.org/galt-stn/cproster/locomotive/5400s/cp5480.htm 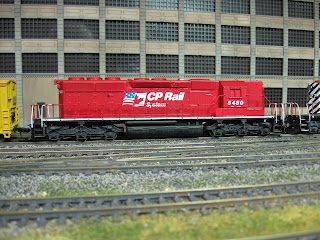 I'm nothing special when it comes to modelling. But having these three units on the roster adds a bit of variety to the layout, and often prompts visitors to ask whether there really was a prototype. Plus, they were fun to make.
Posted by JDL56 at 7:51 PM