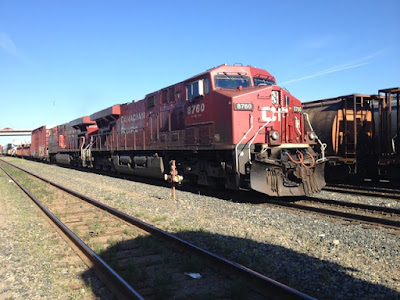 A trip to Saskatchewan in late June afforded a chance to do—what else?—a bit of railfanning.

It started with the journey along the Trans-Canada Highway from Winnipeg. For many kilometres along the way the highway parallels the CPR mainline and, in a few places in Manitoba, the CN line. 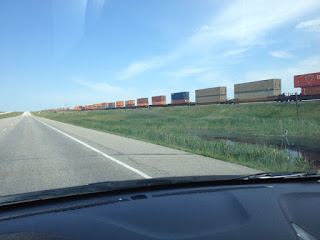 In some places, the tracks are very close to the highway. If you are lucky, you will come across trains in those places. I was not very lucky on this trip, seeing only a few trains up close.

Our destination was Swift Current, with a side trip to Saskatoon.

The railway arrived in Swift Current in 1882. Today it is a busy place, with as many as 30 CPR trains a day.

The Swift Current Sub. runs from Moose Jaw, to the east, to Swift Current. To the west is the Maple Creek Sub. to Medicine Hat, Alberta.

A view from the Second Ave. overpass—a great railfanning location—shows a large number of grain hoppers in the yard, providing a clue as to what the main source of traffic is in this area.

Note the spilled grain on the hopper below; this is something I have modelled on my layout. 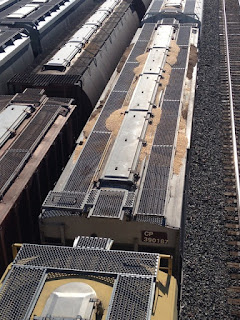 There is an impressive line of railway buildings in the yard. In addition to the station (built in 1907), there is a two-storey dining hall (1908) and one-storey express building (1912). 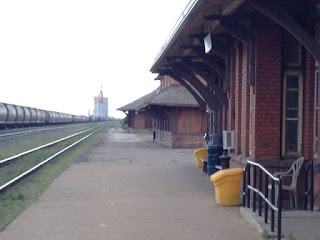 Several of the trains that came by when I was there were led by UP locomotives. I asked one of the crew members awaiting a train why that was. 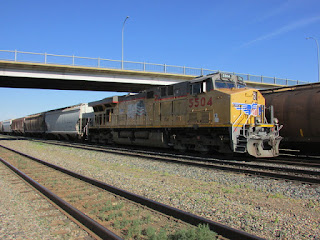 “Hunter has leased out all our units to make money, and now we have to lease others back,” he said.

I noted that I missed seeing the old SD40-2 units. A train master, a former engineer, said he missed them too.

“The new ones are so computerized, it’s hardly like driving a train,” he said. “You just press a few buttons and it’s like driving a car with cruise control.”

Today the SD40-2s remaining on the railway are mostly used for yard duty, he said.

I also spoke to a conductor who was awaiting his next assignment.

“Life on the railway is hard,” he said of his 13-year career. “It’s hard on family life. I’m divorced. Most of us are divorced,” he said, pointing towards the others on the platform. 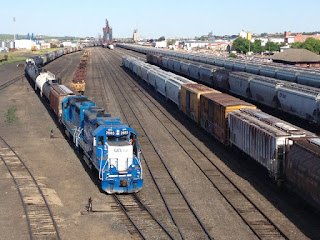 Swift Current is also where the Great Western Railway interchanges with the CPR. The Great Western services branchlines once owned by the CPR and CN, moving over 6,000 cars each year.

A reminder of times past is the foundation of the old roundhouse, now weed and debris-covered beside South Railway St. 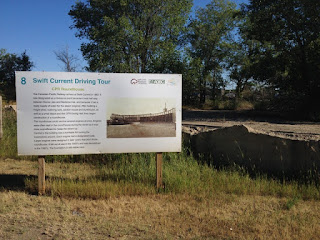 The roundhouse was torn down in the 1980s. The photo below shows it, and the overall yard, in the glory years. 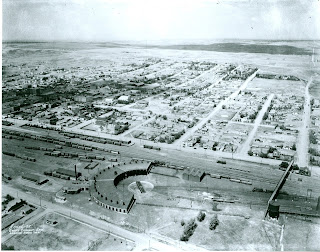 All-in-all, Swift Current is a great place to watch trains. There are excellent public vantage points alongside the tracks, a bridge that offers great views, and lots of trains.

And if you are lucky when you drive there along the Trans-Canada Highway, you will see more trains along the way than I did. 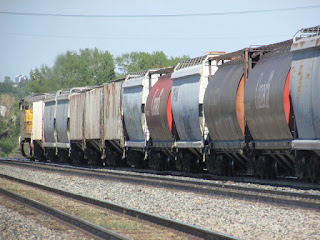 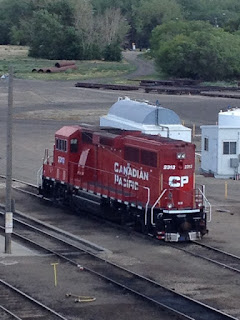