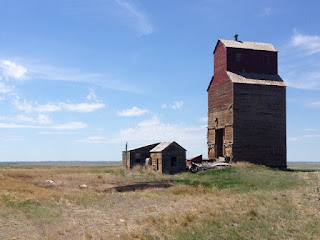 I was driving down Highway 7, between Rosetown and Swift Current, Sask., when I saw the old elevator in a farmer's field just off the highway.

How, I wondered, did it come to be there, all alone?

As it turns out, the elevator was once on a railway line—the old CPR McMorran sub.

Back when it was in operation, it was one of at least two elevators in the hamlet of Thrasher, as the old photo below shows. 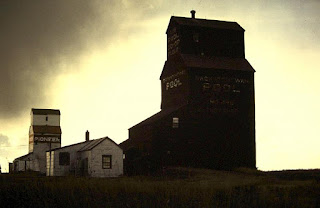 But today one of the elevators is gone, and the other one is abandoned, like the rail line, and like Thrasher, itself. 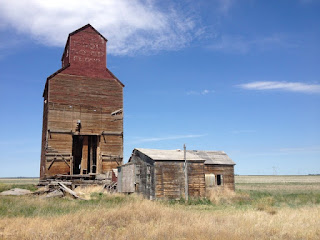 Many years ago, the old elevator would have been alive to the sounds of trains and the voices of farmers exchanging news, talking about the weather and complaining about the railways and the Wheat Board.

But all I heard on this day was the sound of doves cooing inside the old structure.

That and the sound of the wind, blowing the past away.

Update, 2017: The Thrasher elevator has been destroyed in a fire. Click here for info and photos. 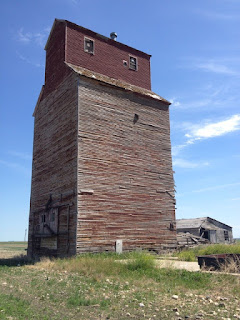