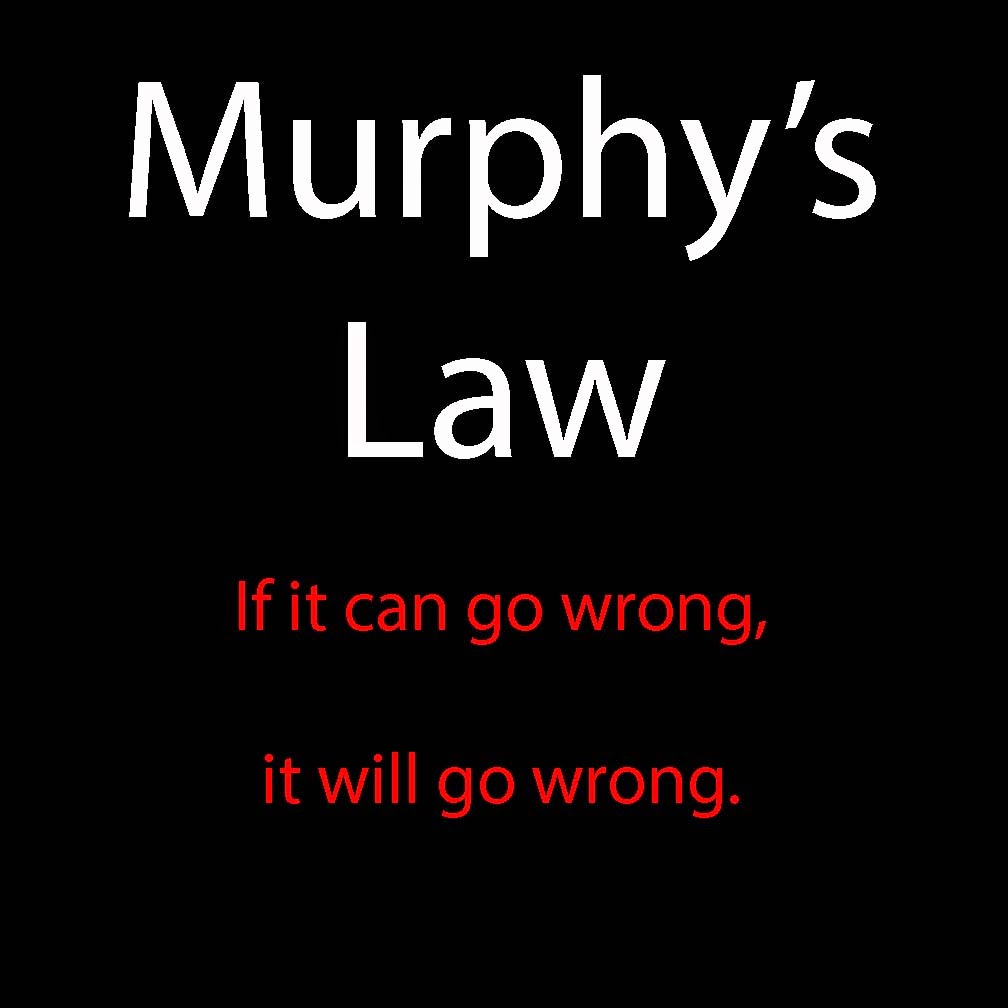 A friend came over last night to run some trains with me. The last time I operated the layout, about two weeks earlier, everything ran flawlessly.

An hour before he arrived, I ran a test train. Darned if it didn't keep derailing at the same spot on the swinging gate that spanned the entrance to the layout room.

After a bit of fiddling, I got it fixed. As I did, I thought: Murphy strikes again!

Yes, good old Murphy's Law: If anything can go wrong, it will, and at the worst time posible.

Murphy's Law is one of those things that helps us make sense of this crazy, weird world.

The law of gravity explains why a heavy object falls to the floor, but Murphy's Law explains why it always hits your foot on the way down and then rolls to the most inaccessible part of the room.

Or, to put it in model railroad terms, gravity is why a locomotive falls to the floor if there is a derailment near the edge of the layout.

Murphy explains why it is always your most expensive locomotive--the one you superdetailed--and not that old Blue Box Athearn you no longer care about.

As a corollary, Murphy also explains why such an accident never happens when you are alone, but only when there is a crowd of visitors from the local model railroad club.

As it turns out, there is an official Murphy's Law for model railroading. Called Bye's First Law of Model Railroading, it goes like this:

Bye also has a Second Law of Model Railroading:

"The desire for modeling a prototype is inversely proportional to the decline of the prototype."

I found a number of other unofficial laws on the Web, which many of us will recognize.

"Soon after you scratchbuild or kitbash a model that has never been produced before, a manufacturer will announce a run of it."

"The number of derailments on your layout varies as the square of the number of visitors."

"The chances of losing something are inversely proportional to the a) size, b) importance of the thing that can be lost."

"Parts fit perfectly together until you add glue."

"If you lose a part to a model, you will not find it until you order a new part to replace it."

"The chances of losing a part are inversely proportional to the ease with which you can replace said part." (To which the poster added this mathematical formula: Pl - Pr/Pr + Pl = Dammit!!!)

"If a kit comes with several of the same part, you will never lose one. If it comes with only one, the probability of it falling off the work bench and disappearing forever are magnified."

"The most inaccessible place on your layout is the place where most of your derailments will occur."

"After saving up your money to purchase a brass model you've been waiting for, somebody will offer it in plastic at a fraction  of the price."

Any other laws to add?