Trip Along the Line: Photo Tour of the M & M Sub. Lower Level

One thing I like seeing in model railroad magazines are photos of layouts in situ--seeing how it fits into the layout room, and how the trains get from one point to another.

You hardly ever see that, of course; magazines like to feature great close-up photos, and rarely have space (or editorial desire) for lots of other overall photos. (Unlike the late Rail Model Journal, which regularly featured dozens of black & white photos of featured layouts.)

So I thought I would post a new photo tour of the Manitoba & Minnesota--a trip around the layout from start to finish, starting with the lower level.

Let's follow a Duluth to Winnipeg mixed freight from the lower to upper staging yards, and everything in between. Trip time, at scale speed with no stops, is just over seven minutes. (A link to the tour of the upper level is at the bottom of this post.) 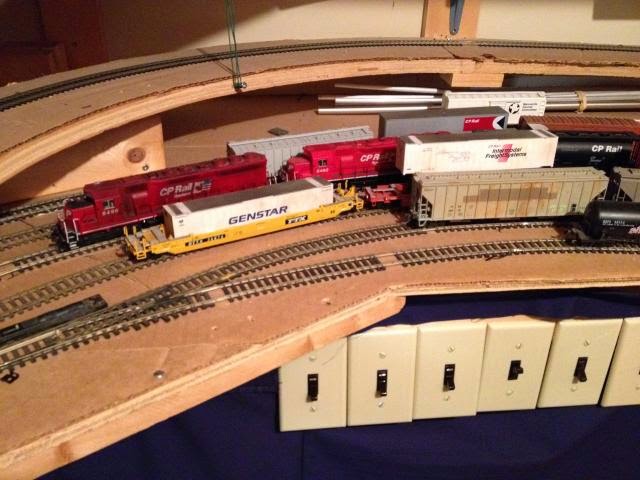 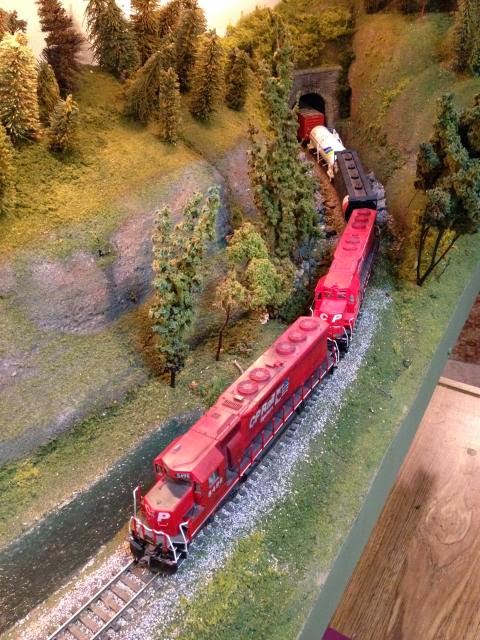 The train makes its first appearance on the layout, emerging through a tunnel from the lower staging yard in the storage room. 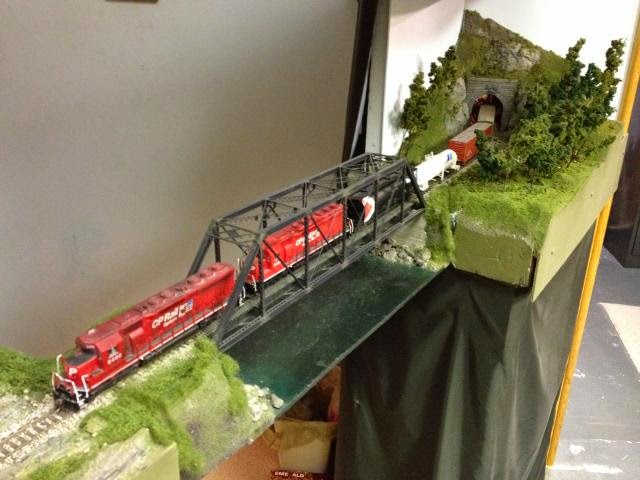 After a short passage through a wall, the train crosses a swinging gate across the Peace River. 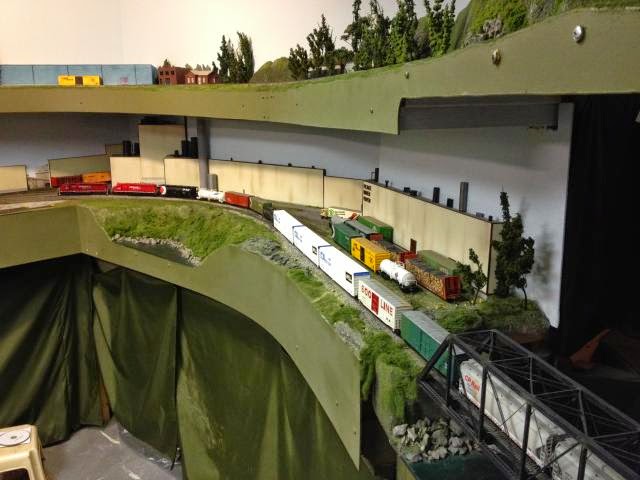 After passing over the gate, it passes by the large Peace River Paper Mill. A plant switcher works the five spurs in the mill. 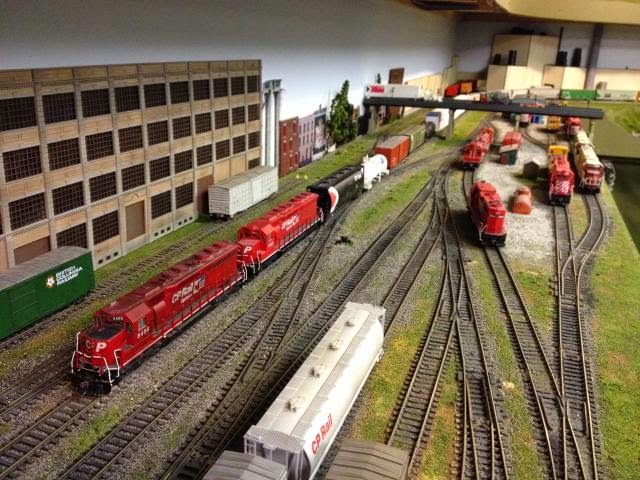 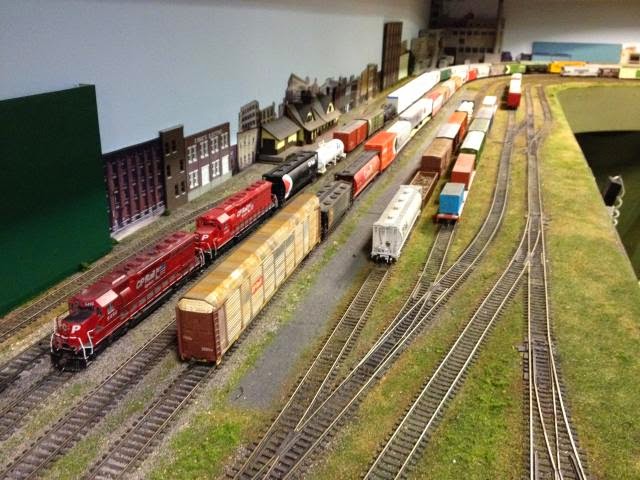 It comes to a stop by the west yard throat. All trains stop here to change crews, and mixed freights drop off and pick up cars. (But not this one, this time!) 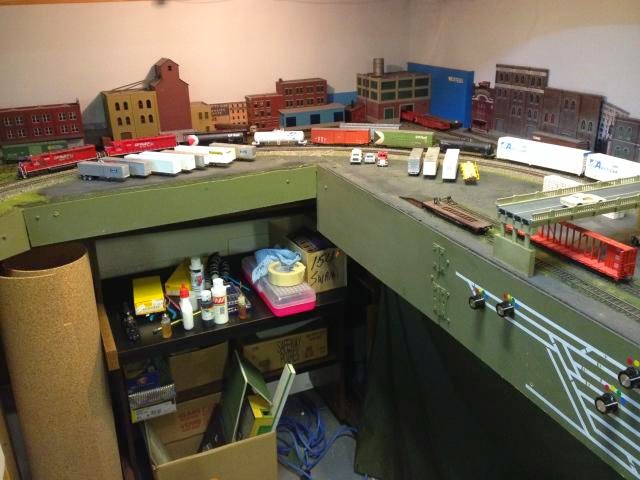 The train leaves Fort Frances, swinging past some industries and the team tracks (with piggyback ramp) on its way out of town. That's my messy work desk below the layout. 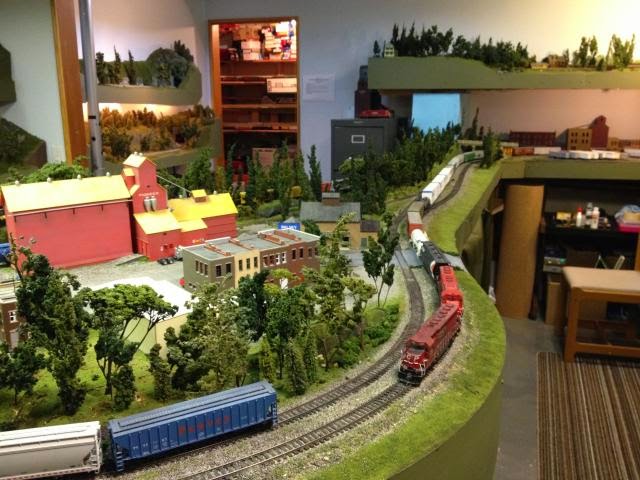 After passing beneath a bridge, the train rolls past the prairie town of Ritchie (named after my good friend Rick Ritchie). That's the storage room through the door in the left background, where the train started its journey. 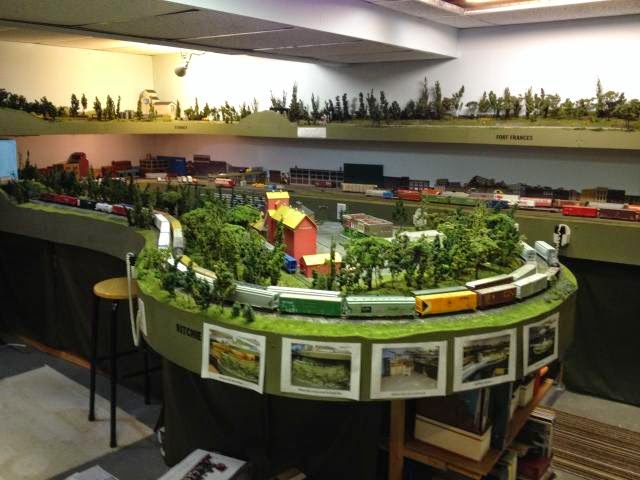 A pull-back shot to show the centre peninsula, showing our train passing TB-WPGMX (Thunder Bay-Winnipeg Mixed) in the siding at Ritchie. The photos on the fascia show the before and after shots from changes in the layout over the past few years. 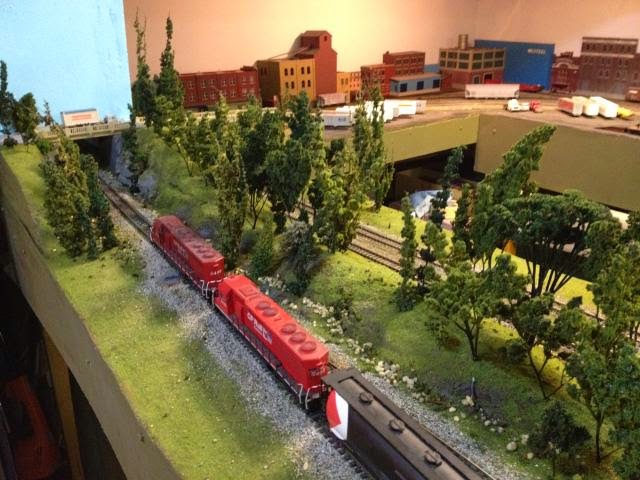 Our train is about the leave the visible portion of the layout for the helix in the storage room. That's the outskirts of Fort Frances in the right background. The trees in the centre serve as a view block. 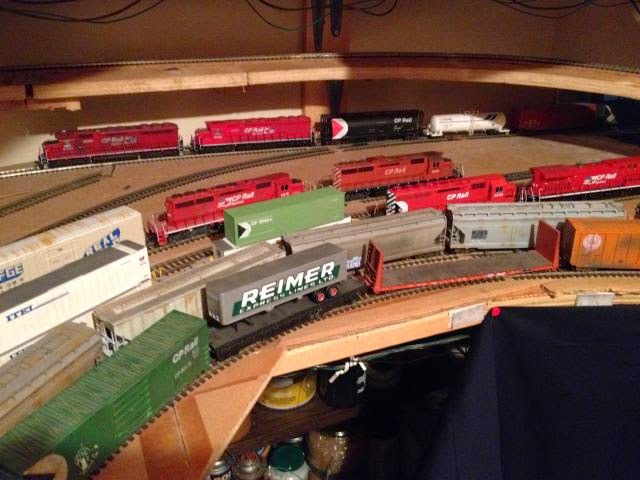