Scatchbuilding and Kitbashing on the M & M Sub.

One of the things I enjoyed doing a lot when I started in this hobby was scratchbuilding.

My early efforts were terrible. And my later efforts weren’t prize winners, either. But it felt good to make something uniquely mine.

My very first effort was the warehouse in the photos above and below. It was made out of balsa wood. I scribed the siding with an X-acto knife. (It looks terrible.) 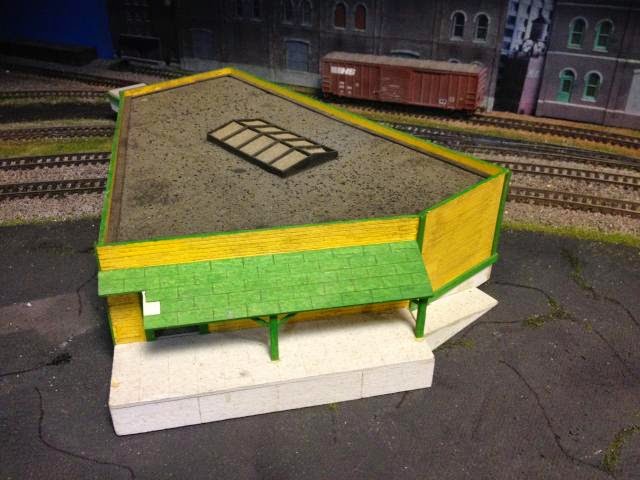 The roof is made out of cardboard, and the skylight features some of the opaque packing material that used to come with Athearn Blue Box locomotives.

It was designed to fit a particular place on my first layout. It never found a home on my new one, for a few reasons: First, it’s too small to be served by rail in the era I model (1990s). Second, it's footprint doesn't fit the new space.

But, most importantly, my skills have advanced to the point that it no longer is appropriate for use.

Even thought I have no use for it, I haven't been able to throw it away. Every now and then I think I might like to resurrect it—put on new styrene siding and see if I can’t make it shine again. 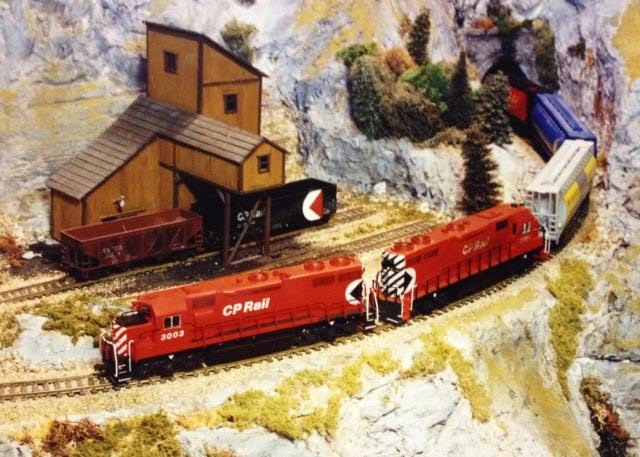 My second scratchbuilt building was the mine in the photo above. It also occupied a prominent place on my old layout.

When I built my new layout, it too was without a home. I gave it to my brother-in-law for his layout; he later sold it. I wonder where it is now?

I also made some wood crib elevators—prairie skyscrapers. The biggest one was made for a friend who wanted one for his layout. I posed it on my layout before he took possession. 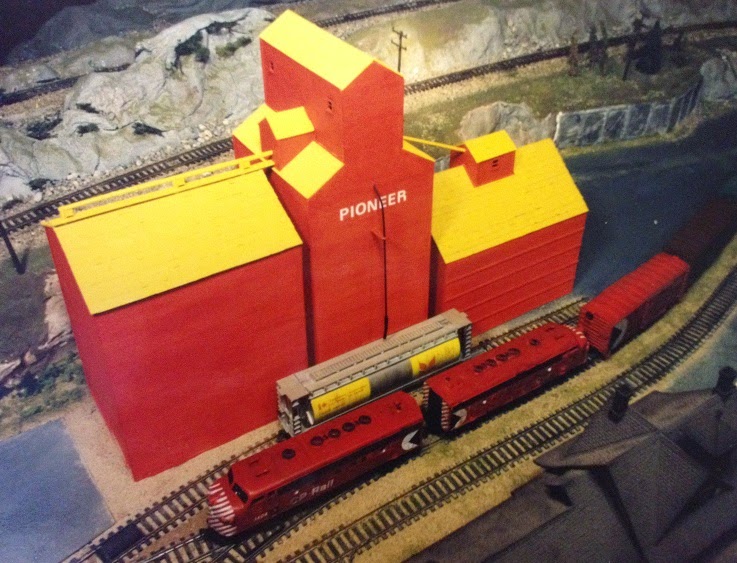 That is the real Pioneer orange, by-the-way. I went to their head office and got a jar of it.

I've made other grain elevators, like this one, at Turney. 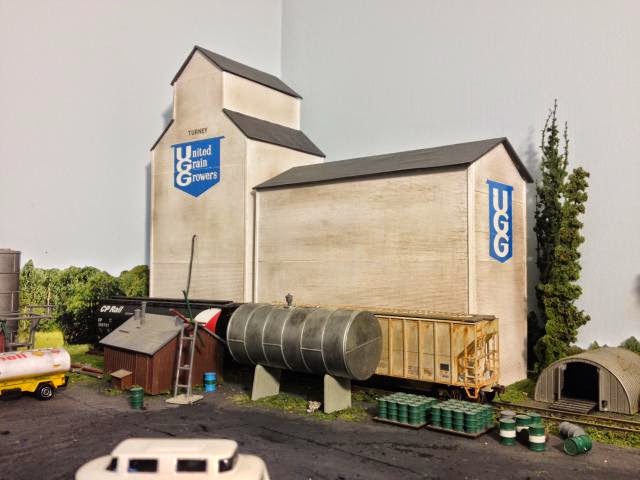 My biggest scratchbuilding project is the Peace River paper mill. It’s amazing what you can do with sheet styrene and foam core. 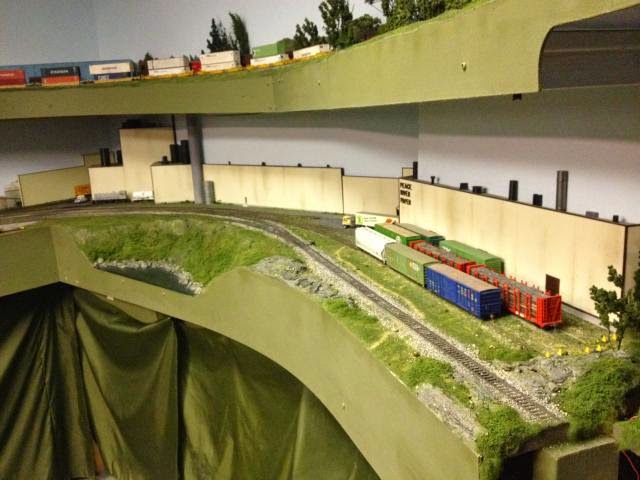 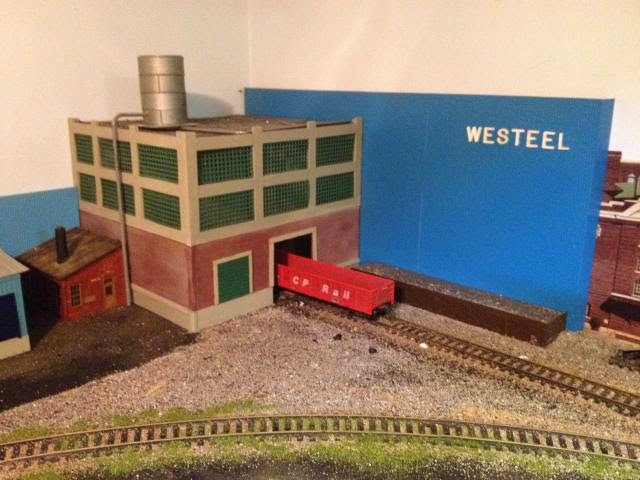 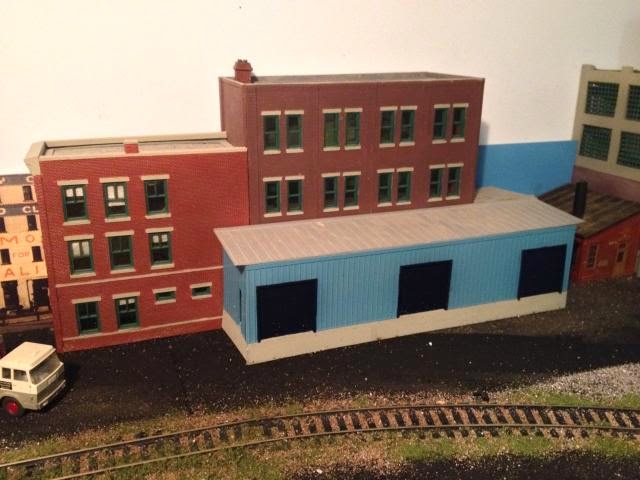 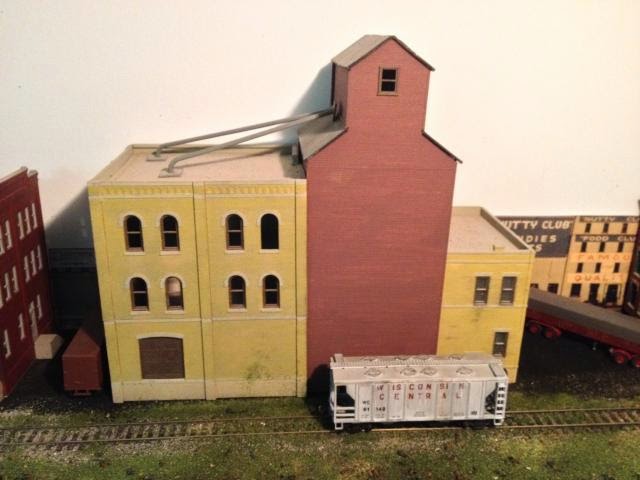 None of my buildings are contest winners—those built early, or those built later. But they do the job, and building them provided many hours of enjoyment.

Since the M & M Sub. is basically done, I haven’t built any buildings—scratchbuilt or kitbash—for some time now. But every now and then I think it might be fun to build something again.