The Canadian Has Landed 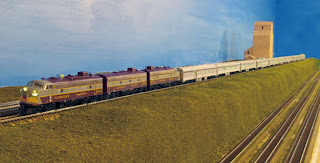 Well, the first production sample, at least. It arrived last weekend in Toronto, where it was unpacked by Rapido Trains owner Jason Shron.

Writes Jason: "When you have waited so long for something and it is finally happening, it is difficult to believe that it is really happening. We started work on The Canadian in fall 2007. We announced it in 2008 and spent the better part of two years doing the R&D. We started cutting the steel in 2010 and got our first samples in May 2011. Getting the tooling done for The Canadian required us to spend a combined total of three months in China in 2011, and there were times when we thought, 'there is no way we can pull this off.'”

You can read more about the arrival of The Canadian, and see photos, on Jason's Rapido Trains blog.
Posted by JDL56 at 8:37 PM