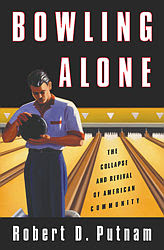 In the 1990s, Robert Putnam noticed a curious thing: The number of Americans who went bowling was increasing, but participation in bowling leagues was declining. What did it mean?

Answers to that question were found in Bowling Alone: America's Declining Social Capital (updated in 2000 as Bowling Alone: The Collapse and Revival of American Community).

Drawing on nearly 500,000 interviews over the last quarter century, Putnam showed that Americans sign fewer petitions, belong to fewer organizations that meet, know their neighbors less, meet with friends less frequently, and even socialize with their families less often.

And, of course, they bowl alone—more Americans are bowling than ever before, but they are not bowling in leagues.

Putnam suggested that TV and the Internet were partly to blame, along with two-career families, suburban sprawl, generally busy lives and generational changes in values.

Thoughts about Bowling Alone came to me during an online discussion about the state of model railroad clubs today.

People who participated in the discussion noted that many clubs today have experience a decline in membership. My own club has a relatively stable membership of 87, but that’s down from the over 120 or so who used to be members.

I can think of a few reasons for the decline, besides those mention by Putnam.

First, there are fewer young people in the hobby—as older members pass away, they are not being replaced.

Then there’s the ubiquity of all those ready-to-run models—the need for how-to clinics, which once were the staple of many clubs, aren’t needed as much anymore.

And, of course, there’s the Internet. If you have a question, you can just post it inline. There’s no need to wait for the next club meeting, or even to join a club.

No post about the decline of clubs would be complete without a nod in the direction of club politics, not to mention some of the unique personalities that call the club home. But that’s true of any organization you are apt to be part of.

Of course, clubs aren’t for everyone; there are still lots of “lone wolf” model railroaders. Some people are just more comfortable enjoying the hobby alone.

I value my club. It’s 56 years old this year. It’s seen its ups and downs. But I always tell new model railroaders to join. It’s a great place to learn more about the hobby, borrow books and DVDs—we’ve got a great library—and get access to home layouts.

I hope it doesn’t disappear.

Do you belong to a model railroad club? Why? Why not? And how is your club doing?
Posted by JDL56 at 6:14 AM