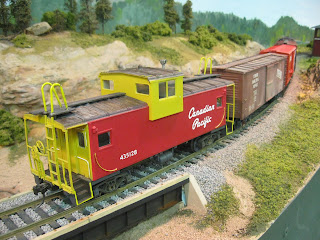 There’s an old joke that the older we get, the more appealing O scale becomes. That was certainly true for George Myer. In 1997, George’s eyesight began to deteriorate; today he is legally blind.


But that didn’t stop the avid model railroader from staying in the hobby—he just switched from HO to O scale, and kept going.


George is the proud creator and owner of a gorgeous two-rail O scale layout called the CPR Central Northern Subdivision. The layout resides in a 22 by 20 foot room in George’s Winnipeg basement. Set in the late 1960s to early 1970s, it finds CPR trains traveling though fictitious towns and scenes in southeastern B.C.


George's great layout will be featured in the next issue of Canadian Railway Modeller. 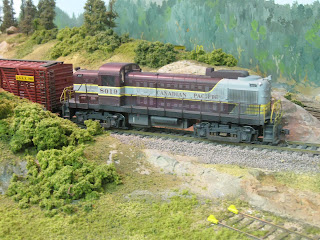 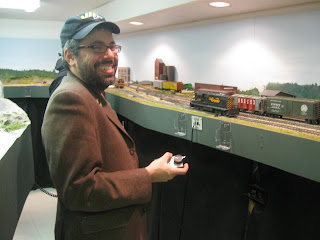 Jason Shron of Rapido Trains enjoying an operating
session on George's layout.
Posted by JDL56 at 7:49 AM