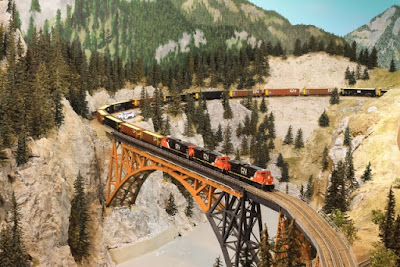 For Scott Lamoureux, it was seeing the railway bridges over the Fraser Canyon as a child that sparked a life-long interest in the area—and that led to the construction of his great Canadian model railroad.

“In the last ten years, I have travelled from Vancouver to the Interior of B.C. to visit family and started to make a habit of driving the Fraser and Thompson canyons and stopping to watch a train or two,” he says.

“The area was really inspiring. So when I was thinking about a new layout in 2011, this area came to mind.”

Although Scott had dabbled in HO, he was switched to N scale in 2004.

“N scale was attractive for my limited space, and the detail of the models had really improved from the 1980s and 1990s when I had first been exposed to it,” he says.

He built his first N scale layout in 2004, and a few more after that. “Most were not well conceived, and the scenery was particularly not effective, so I tore them out one after another,” he notes. 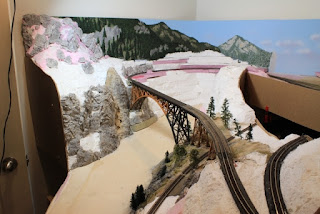 Scott started his present 7 by 10 foot layout by building the CN “high” Cisco bridge (the name comes from the indigenous name Siska for the area). He used plans for the bridge from an article by Doug Hole in Railroad Model Craftsman.

“I had not previously undertaken such a large building project, and indeed, had never scratch built any kind of structure,” he says.

“I wanted to have a long line of sight for the bridge scene,” he says. “It became clear that despite my intentions to model the CP bridge as well, I could not fit the latter into my modest space, tucked away in the basement corner with the furnace.” 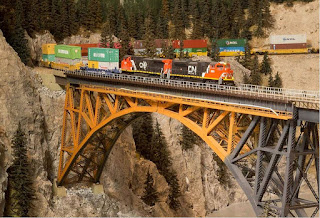 (Click here to read about how Scott built the bridge.)

For Scott, scenery is a favorite part of modelling. The topography was built up with foam and rock castings he made from a few commercial molds, as well as a set of his own made from suitable rocks from the region around my home.

The ground cover is a simple process of soil-coloured paint, sprinkled with grouts, light applications of ground foam, and some Woodland Scenics static grass.  The paint is the primary adhesive and he uses matte medium to secure it all afterwards.

Even though the region he is modelling is quite arid, there are a lot of trees. Since nothing commercial worked for him, Scott made trees from wire armatures, applying coarsely ground up lichen as a foliage material, and then as final spray paint coat. 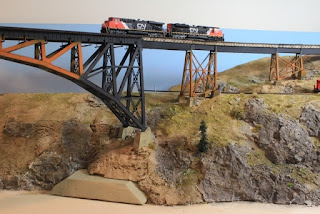 “There are a lot of trees on the layout, and thousands of feet of wire,” he says. “It was good winter work in front of the TV, but I would not do it again!”

The backdrop is hand-painted on hardboard. “I’m pretty happy with it, but it required a few attempts,” he says, noting that getting the perspective right was a challenge.

For painting the backdrop, Scott used base and sky paint colours and tinted the paints with artist acrylics, following methods of Mike Danneman in his MR articles.

For the river, Scott wanted to model the spring runoff when the river is turbid from all the snowmelt. At the suggestion of a friend, he used self-leveling cement to pour the river. 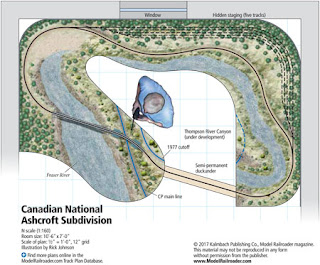 “This worked very well, giving a flat surface over the various plywood joints underneath, and providing a clean edge with the scenery on the slopes,” he says.

He painted the cured cement and then textured it with thick gel gloss, then dry brushed on waves with white, followed by a coat of Future floor polish.

After this scene was largely finished, Scott turned his attention to the other side of the layout.  He decided to model the neat scene at Skoonka (or Goldpan) on the Thompson River, just west of Spences Bridge.

“The CN line cuts through a series of interesting tunnels at river grade and there are some nice rock shed structures as well.  I designed a scene that allowed room for a hidden, double-ended staging yard behind.” 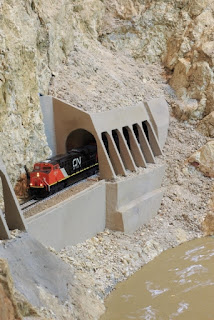 The real challenge was the rock sheds.  Scott tried to make them plaster and wood, but nothing worked to his satisfaction.

“In the end, I did them as 3D prints in nylon, using Tinkercad (an online free package) and a local printer,” he says.

“They turned out to be ideal for the task and were in the end quite inexpensive.  The rastering lines from the printing were toned down with sanding and a few heavy coats of spray primer.”

The rest of the scene is built up from foam scenery, cast rocks, and lots of talus.

“I realized that I had a small space for a bit of a MOW scene so I developed that with a cosmetic siding,” he says, noting the track does not connect to the mainline but is easily hidden. He calls the rea Morris, although he knows this is not quite correct. 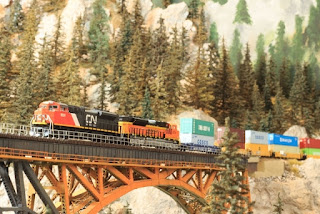 The river was poured the same way and painted a muddy brown, and Scott has started to lay down a lot of static grass.

The backdrop for this section was raised to 36” and hand painted again. “I learned from the Cisco scene that you can never make your backdrop too tall!” he notes.

He covered the staging yard with a lightweight foam cover and sceniced it, “but there is still much to do with this scene,” he says, noting he has also worked out a way to model the interesting sediment exposures that are found in the canyon using carved foam as a form and adding sediments to the foam face off-layout.

“It works pretty well and is very distinctive for the region,” he says. 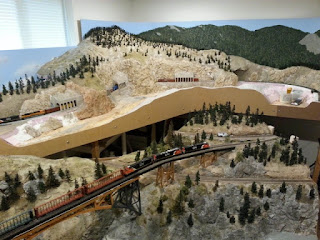 Operationally, the layout is a simple oval with the staging yard. Scott runs NCE DCC and the turnouts are all controlled with the DCC handheld using macros.

The track is mostly Atlas code 55 flex track, but he has some Micro Engineering bridge track and concrete tie flex track.

Turnouts are Atlas code 55, on some of which he has replaced the points with solid rail.

As for the future, Scott is enjoying the current layout but would like to build on that is more operations-oriented—if he can get a larger space.

Although Scott built the layout alone, in the last few years a model railroad group has emerged in his home town he has made some great friends on various internet forums. 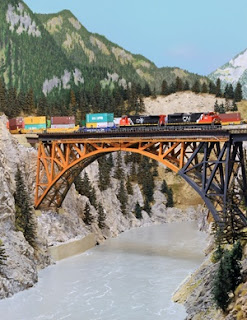 “They have been a part of the process, albeit virtually, but their advice and suggestions (and critical feedback) have been really helpful for me,” he says.

“There were a lot of times when I was ready to give up but these folks helped me stay the course.” 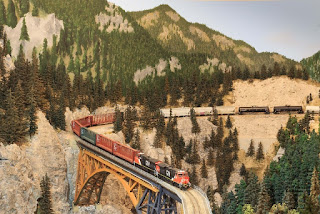