Murder and Model Railroading in Murder to Scale 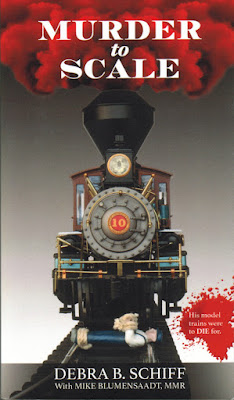 Murder on the Orient Express, Girl on the Train, The Necropolis Railway—there are just a few of the dozens of murder mysteries set on or involving trains.

But a murder mystery set in a model railroad club? That’s a new one for me, and maybe for you, too.

I’m referring to the book Murder to Scale, a 2017 book by Debra B. Schiff with assistance from Master Model Railroader Mike Blumensaadt.

“Model train enthusiast Tom McCloud is eager to assemble his portion of the annual Christmas train display in a local church basement. Instead, he discovers the bludgeoned body of a fellow modeler, Bill Murphy.

“Everything points to Bill as the hapless victim of a burglary gone wrong. With Bill's scratch-built locomotive missing, Tom is convinced the murderer had to have been a modeler who knew the true value of the stolen engine.”

Can Tom discover the truth before his investigation is derailed and he becomes the next victim of a ruthless killer.

You’ll have to read the book to find out.

As for reviews, Garden Railways Magazine says it “a fun read. It is well written and moves along quickly . . .  where railroad matters (some pivotal to the story) are discussed, technical notes for the uninitiated (all accurate and informative) are supplied.”

On Goodreads, one person says “Great book! Fast-paced with believable character building. I know nothing about model trains but found the subject interesting and well explained.”

As for me, I never thought there model railroading could be the subject of a murder mystery. But maybe, as one reviewer suggested, the hobby really is something to die for.