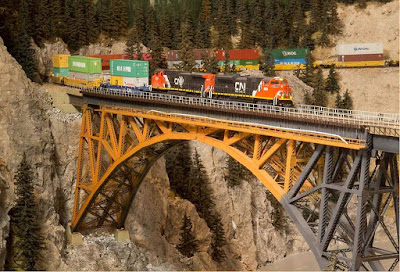 For an overview of Scott’s Great Canadian layout, click here.

Scott Lamoureux started his layout by building the CN “high” Cisco bridge (the name comes from the indigenous name Siska for the area).

He had not previously undertaken such a large building project, and indeed, had never scratchbuilt any kind of structure. 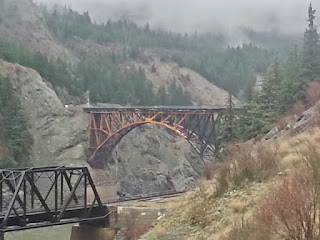 He was fortunate that plans for the bridge had been published in an article by Doug Hole in Railroad Model Craftsman.

Scott scratchbuilt it with a few commercial components and followed the plans, scaling them to 80% of true scale to help fit the structure into my space. 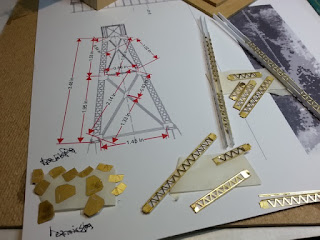 “I scratchbuilt it with a few commercial components and followed the plans, scaling them to 80% of true scale to help fit the structure into my space,” he says.

The main truss-arch is mostly strip styrene with some telescoping brass tubing that connect the two arch segments and keep the deck from warping.

Some of the details took a long time; since the bridge track needed to have different tie dimensions, Scott added five pieces of styrene to each tie to build up the proper profile (over 1,000 parts alone). 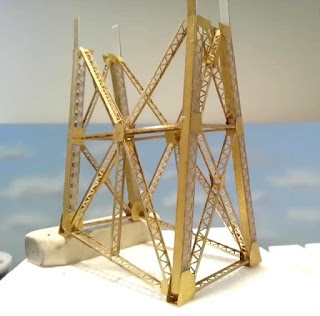 The catwalk and maintenance walkways are commercial brass parts. The footings are cut from clear pine.  The main structure is about 28” long and 11” tall.

The two approach piers were more challenging.  The riveted box trusses from the 1914-era are very different from available commercial products, so Scott decided to etch these parts to build up the pillars. 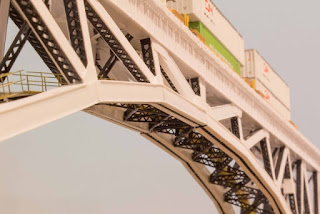 He drew the parts in a graphics program and had them commercially etched before gluing the parts together. To Scott, they are the real standout of the bridge, but strangely they are rarely seen in my photographs!

The approach deck was scratched from styrene and the walkways and railings were custom etches as well.

The first batch of railings were brass; due to a series of unfortunate incidents, culminating in our cat sitting on them, a second batch were etched from stainless steel.  There are many other etched parts for gusset plates, joints, and the footings. 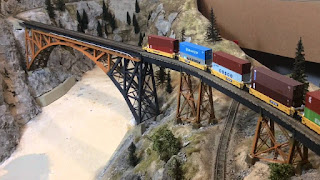 Scott airbrushed the bridge to match the current unfinished look.  The orange primer dates to the repairs from a 1970s derailment; according to several former CN MOW workers Scott spoke to, they stopped painting for the season and just never got back to it.

He has not weathered it yet, but some rust and dust would be in order. 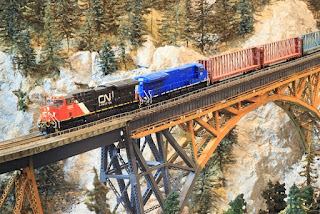 Scott mounted the bridge on a 2’ X 4’ plywood base with foam scenery so it could be recovered if the larger layout was ever demolished.

He wanted to have a long line of sight for the bridge scene and it became clear that despite his intentions to model the CP bridge as well, he could not fit the latter into his modest space. 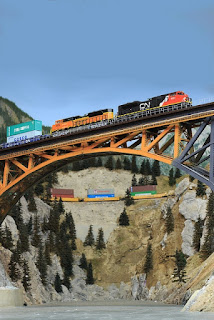