"Ten Pounds of Layout in a Five Pound Room"

"It would have been far more prudent, and probably in the end more satisfactory, to acknowledge the limitations of the space available, and design something that was more manageable," he wrote on his blog.

"That would include time and budget, as well as construction and ops."

I'm sure Weldon, who is also a columnist at N Scale Magazine, isn't the only one who has had this experience, although few have said it so well.

Lots of people have tried to cram too much layout into too little space, with the same results.

Instead of providing satisfaction, and the sense of a job well done, it ends up leaving the owner frustrated and unhappy--and often the layout unfinished.

In a brave and honest post, Weldon described the process of deciding to dismantle his layout, and the impact his hobby had on his family life and relationships.

He was proud of the layout, the work that went into it, and all the recognition it had received, he said.

But over time he became “more and more aware of the downside of having such a complex design. Time spent on maintenance began to outstrip time spent enjoying the layout.”

He had enjoyed building parts of it, but they “had become a bit dusty and tired, and it got to be harder to find the energy to commit to renewing things and putting right the things I knew were wrong."

Before the event that forced him to take the layout down, he had already been "thinking seriously about giving up on it for some time, and seeking out something a little simpler and more satisfying."

There was, he added "a life metaphor in there somewhere.”

Weldon went on to say that in the future he intended to try to not fit ten pounds of anything into five pounds of space--layout or life.

"I need to streamline my own life, scale it back, and make sure that I'm working as hard at making my life, and the lives of those I love, as satisfying as my experience with the layout was.”

For an update on how Weldon is doing now, check out his November, 2013 blog post. 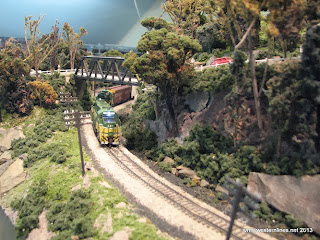