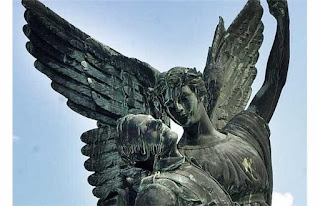 When the Great War ended, towns and cities across Canada began building memorials to honour the over 60,000 Canadians killed in that conflict.

In addition to the national, provincial and other civic memorials, there were a number of private memorials created by companies to honour fallen employees.

Among then was the Canadian Pacific Railway, which created the "Angel of Victory" (sometimes called "Winged Victory"), a monument to the 1,115 CPR staff killed in that war.

Three copies were made of the monument, created by Montreal sculptor Coeur de Lion McCarthy. They were placed outside CPR stations in Vancouver in 1921, Winnipeg in 1922 and Montreal in 1923.

Despite its name, there is nothing especially victorious about the monument, which shows a sad and stoic angel carrying away a limp, dead soldier.

It's a subtle statement about the waste of war, a lament for the loss of so many lives.

In this regard, it is similar to Canada's greatest World War One memorial at Vimy Ridge in France, which is more a monument to sacrifice than a celebration of victory.

(The Vimy Ridge memorial was said to have been Hitler's favorite World War One memorial, and he went to great lengths to ensure its safety after the Nazis captured France in the Second World War. Read that fascinating story in the Toronto Star.)

Of the three CPR memorials, the one in Montreal has fared the best since it is inside the station. The copies in Vancouver and Winnipeg are beginning to show the wear of the decades.

(The Vancouver version made that city's list of top 10 endangered historical sites in 2009.)


Of the ones in Vancouver and Winnipeg, only the one in Vancouver is still in its original location. Both are missing the original crown, which the Montreal version still has in the angel's hand.

The Winnipeg version was moved after the CPR sold its station; it now is outside Deer Lodge Hospital (which serves veterans).

The tablet on the monuments says:

"To commemorate those in the service of the Canadian Pacific Railway Company whom at the call of King and Country left all that was dear to them, endured hardship, faced danger and finally passed out of sight of men by the path of duty and self sacrifice, giving up their own lives that others may live in freedom. Let those who come after see to it that their names are not forgotten."

Read about Canadian Railway Troops in World War One here.


Thanks to Montreal in Pictures, West End Dumplings, Vancouver Sun and others.