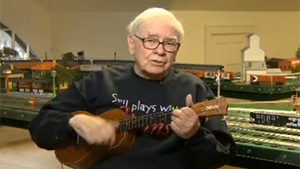 By now many people have seen the video of Warren Buffett playing the ukulele on Chinese state television during the Chinese New Year.

Most commentators have focused on his playing and singing--and wondering why on earth he permitted the video, taped last year for a charity dinner organized by a Chinese investor, to be broadcast in that country.

But I'm not interested in his playing or singing. (Even if the song is "I've been working on the railroad.") I'm more interested in what appears to be a Lionel train layout behind one of the world's wealthiest men. Is Warren Buffett a model railroader?

According to the Nov. 11, 2011 New York Times, Buffett "collects model trains." So maybe it's true--the video certainly lends credence to that report.

(He's also wearing a shirt that says: "Still plays with trains." Since he owns BNSF, that could mean the real kind, as well.)

Then there's this interesting tidbit; earlier I posted an article about an amazing 4,000 square foot O scale layout. Apprently, the person who owns it, and who prefers to be anonymous, lives in Nebraska.