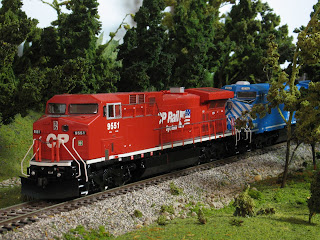 Compared to many other popular blogs, 150,000 views is no big deal. But it feels significant to me. I'm grateful and humbled that so many people want to read my ramblings.

As I said when this blog reached other page-view milestones, I started it just for me--a way to chart the progress of the M & M Sub. and indulge in a little bit of fun writing. (As opposed to the kind of writing I do for work--which is also fun, but in a different, employable sort of way.)

It was, as a friend noted, sort of an online book or magazine about the layout or, at the very least, a simple record of its progress.

Along the way I decided to post photos and information about layouts made by others, along with prototype information. A few philosophical musings about photography, what Chinese workers think about model railroading and mandalas were thrown in for good measure.

At its most basic, this blog is a way to say that anyone can make a great model railroad, no matter their skill or finances. The CP Rail Manitoba & Minnesota Sub. is pretty simple--no DCC, no sound-equipped locomotives, no code 83 track.

I don't worry about fidelity to prototype (plausibility is my goal), and I'm not embarrased to be running Athearn Blue Box units, along with an assortment of rolling stock from Tyco, Like-Like (the older kind), Lionel and others (along with the newer RTR models).

For the last 17 years, the layout has given me something creative to do, and occasionally kept me sane. And the blog has been a hobby within a hobby, also providing an outlet for creativity and, maybe, my sanity too.
Posted by JDL56 at 9:09 PM