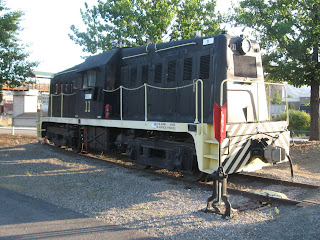 While wandering the waterfront in Wenatchee, WA during my recent trains and mountains tour, I came across this interesting unit—a Whitcomb 65-tonner that had formerly belonged to the U.S. Army Transportation Corps.
According to a sign on the unit, the locomotive—a 65-D.E.-19-A—was built in 1944 and worked in North Africa as U.S. Army 8450. It was part of a large number of Whitcomb locomotives sent overseas as part of the war effort; the units also worked in Great Britain, Italy, Belgium, Germany and The Netherlands.
In a helpful overview about these units on a web page (about Lehigh & New England #601 and Wanamaker,Kempton & Southern #602) by Jeff. Z., R.H. Piligian notes that the Army specification called for a locomotive to be able to run on any European main line, have a top speed of at least 45 mph, and be able to operate with similar locomotives.
Piligian goes on to note that locomotives from Whitcomb were used to pull the first train into Rome after it was taken from the Germans; the first train across the Rhine River; and the first train into Paris after it was liberated by the Allies. 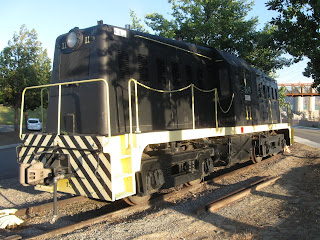 After the war in Europe ended, the Army shipped 118 of the units back to the U.S. for use in the war against Japan. When the war against that country, the units were no longer needed; they were sold to various shortlines beginning in 1947.

At some point in its life, the 8450 became American Silicon Technologies (ASTX) 11. I have not been able to learn how it came to be displayed in Wenatchee.

Learn more about the Whitcomb Locomotive Compnay here and here (with lots of photos).
Posted by JDL56 at 12:43 PM