Death and the UK Model Railroader V: A Cautionary Tale


Not sure if this is a cautionary tale or not, but it does involve death and a model railroader--and the sad destruction of a layout. The article comes from Kent Online in Great Britain.

If there's any lesson to be drawn from it, I guess it is to make sure you leave clear, written instructions for the disposition of your model railroad.

As for the layout itself, it was probably unrealistic of the deceased to hope it could be saved--very few can be.

The  saddest thing was the deceased's inability to go upstairs for ten years to run his trains.

By-the-way, an equity release company appears to be a business that gives you the value of your house in cash while you are alive, but takes ownership of the house when you die and sells it to get their money back.

Model railway set to be smashed up

The railway took more than 30 years to build, it carried no passengers and its surrounding scenery was awesome.

But passersby never knew it existed as trains, track and surrounding were all tucked away in a loft in Bearsted.

Now the intricate and complex model railway, measuring 6 metres by 4 metres, is about to be smashed up following the death of its builder, Frederick Ernest Lucas.

Mr Lucas, 87, left no next of kin and his bungalow in Weavering Street, will next Wednesday be handed to an equity release company.

His executor and friend Peter Scobey, said: “All those decades of lovingly building it just shone through. If you saw it you would think it’s out of this world. 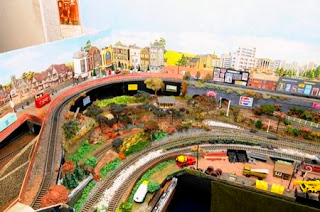 “You go up through the loft hatch and you’re totally surrounded by this railway and landscaping of countryside with little houses.

“When the collectors went up last weekend they just couldn’t speak for the first 15 minutes. They had never seen anything like it on that scale and beauty.

“It took Fred over three decades to build.

“Sadly, the loft will be cleared by the owners, and so the only thing that is salvagable is the little railway’s rolling stock, which will go to specialised collectors.”

Ill health followed Mr Lucas, which prevented him from climbing the loft ladder to tend his beloved railway and so it remained unused for ten years.

“Fred was devastated by his wife’s death and his health gradually deteriorated,” said Mr Scobey.

“He collapsed inside Tesco’s at Grove Green on Thursday, July 7 and was taken to Maidstone Hospital before passing away in a nursing home two weeks later.

Mr Scobey said: “A few days before his death he made me promise I would do everything in my power to try to save as much of the railway as possible.

“I can’t be present when the rest is broken on Wednesday, I’d be too emotional to witness it.”
Posted by JDL56 at 5:30 PM