A Place With No Trains 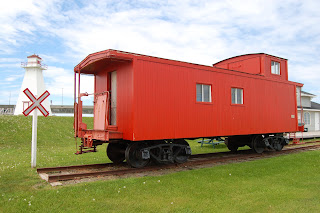 Prince Edward Island is a wonderful place. The only thing that would make it better would be trains.

It used to have trains. The first rails of the New Brunswick and Prince Edward Island were laid in 1886. The line was eventually absorbed into Canadian National Railways; the last CN train left the Island in December, 1989, ending over 100 years of railway activity in the province.

All that’s left of that storied railway history today are a few stations, one former locomotive and a few pieces of rolling stock, such as the ex-CNR caboose at the railway museum in Borden, near the foot of the Confederation Bridge. The right of way itself is now a pedestrian trail.

On my way home from PEI (on the amazing Confederation Bridge--a 12.9 kilometre (8 mile) long bridge connecting PEI with the mainland of Canada), I stopped at the old CN Borden station and photographed the caboose. (Located at the foot of the bridge.)

According to Michael Taylor, the caboose was built in October, 1912 as Grand Trunk boxcar 23368, renumbered as CN 343568, then rebuilt in 1941 as a caboose CN 78301. It ended its days in Riverview, New Brunswick (across the Northumberland Strait) and was donated to the museum in 2003.

More info about the railway in PEI, especially about its diesels, can be found at Traingeek.ca. A history of railways on the island can be found at PEI Railways.
Posted by JDL56 at 4:56 PM