French Fry Capital of the World (and a Railway Museum) 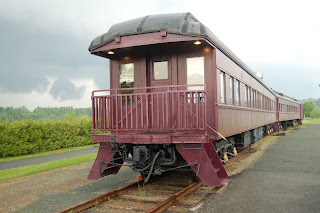 Florenceville, New Brunswick--also known as the "French Fry Capital of the World"--is the corporate home of the McCain Food Empire. It's also just up the road from Bristol, home to the Shogomoc Railway Museum.

I'm in Florenceville on business, and took some time to visit the museum. (Whenever I travel, I try to take in at least one railway-related site.) The museum is housed in the former Florenceville station, built in 1914 and moved to the Bristol site in 1988. (It's identical to the station formerly located in Bristol, and the only one of its type east of Montreal.) It sits alongside an abandoned former CPR line.

Unfortunately, the museum was closed, but I was able to take a look at three former CPR passenger cars outside.They are: 4490 baggage/sleeper; Assiniboine, sleeper; and Grenfell, sleeper.

One car is home to Fresh Fine Dining. I considered eating there, but the prices were a bit above my range. But it looked very nice inside, and seems like it would be well worth the visit.

You can find out more about the musuem here. Information about Fresh Fine Dining can be found here.

Thanks to Steve Boyko of Train Geek for the info on the cars. 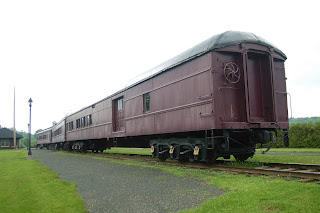