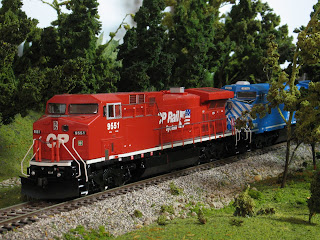 So I set up near one of my favorite railfanning spots on the M & M Sub., near the bridge at Rushing River. I made my way to the bluff overlooking the tracks, and took shots of trains as they came by. First up, an intermodal led by 9551, one of those newfangled AC4400 units (it isn 1995, after all!) 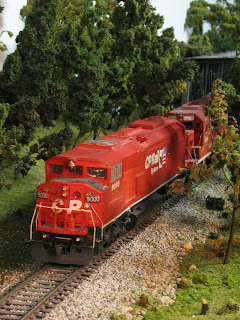 After that came a mixed freight, led by "Red Barn" 9000. This is one of the units that used to ply the rails in B.C. until the AC4400s and other newer power came along. 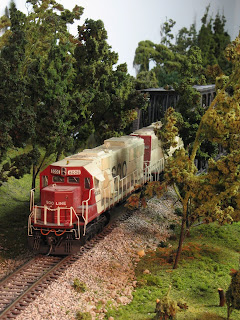 A couple of SOO SD60s was next, pulling a grain train. 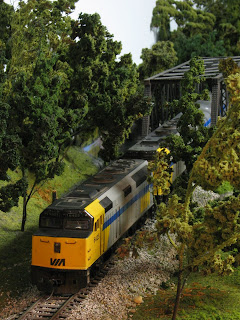 Last, I caught The Canadian, detouring over the Manitoba & Minnesota Sub. rails.

In reality, the last few days have found me taking lots of photos of the layout; photography is sort of my hobby-within-the-hobby, even if the results are pretty basic. Taking pictures has certainly become a lot easier since the advent of digital cameras; in the "old" days, which weren't so long ago, I used film.

Back then, you didn't know if you had a decent shot until after the film was developed; I kept a photo sheet where I recorded aperture, shutter speed, time and other things related to each shot. Now, it's just point and shoot, and make adjustments on the fly.