How Sad Is That? 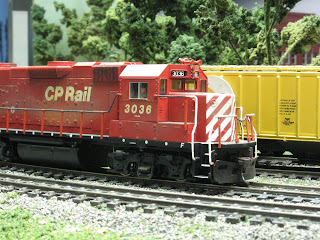 GP38-2 3036 doesn't look like it spent much time in the box.
During the recent Winnipeg Model Railroad Club fall show and flea market, several sellers had boxes of unopened locomotives and rolling stock for sale. Some had signs on the boxes: "Never been opened!" or "Never run!"

They saw this as a selling feature, but all I could think is: How sad is that? How sad is it that the owners of these items never had the pleasure of running them on a layout?

The most common reason why these items have never been opened is that the sellers don't have layouts (and probably never will). Which is not uncommon in the world of model railroading; a friend who manufactures model railroad items estimates that 60 percent of his customers will never run the items he produces: 30 percent are collectors, and 30 percent want to build a layout someday, but likely never will.

(Of course, he doesn't mind this state of affairs, since it means that over half his customers will never call with a warranty issue!)

To each his own, of course. It's not for me to judge how someone enjoys the hobby. But it still feels sad when items that were meant to move just end up sitting in boxes.
Posted by JDL56 at 7:25 PM