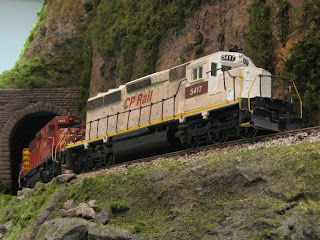 In real life, the unit was acquired by CP Rail from KCS in 1992. To make it, I bought a KCS unit (Athearn blue box) and removed the KCS lettering and numbers. I then masked the area below the cab windows and gave it a patch of primer, after which I added the numbers. Red CP Rail lettering was also applied to the body.
Posted by JDL56 at 6:21 AM