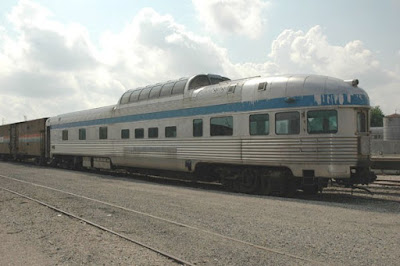 The car, built in 1954 by the Budd Company for the CPR’s The Canadian, was one of 18 dome observation cars manufactured for that railway.

It was retired and sold in 2004 to a private owner by VIA Rail, which inherited passenger service from CN and CP Rail in 1977. And now it is for sale again, this time by Ozark Mountain Railcar.

According to Ozark Mountain, the car is in good condition and retains many of its original furnishings.

I’m not the only one dreaming about this bit of Canadian railway history; when I visited the web page, there had already been over 30,000 other views.

If Riding Mountain Park isn’t for you, Ozark Mountain Railcar has 73 other passenger cars for sale, along with 12 locomotives, 30 freight cars and many other railroad items.

As for VIA today, it still has 14 Park cars in service, numbered 8702 to 8718. Named after Canadian national parks, they have one triple bedroom, three double bedrooms, 24 seats in the dome, one common washroom, a bar and a panoramic lounge at the rear You can find out more about them on VIA’s website.
Posted by JDL56 at 4:13 PM