Railfans will be sad, but residents of Toronto will be happy if they get a new downtown park.

The new park, called Rail Deck Park, will cover the tracks between Bathurst Street and the Rogers Centre leading to the west of Union Station.

The 21 acre is still not a sure thing; discussions are ongoing with CN and Toronto Terminal Railways, which is owned by CN and the CPR, which owns the air rights to the space above the tracks. 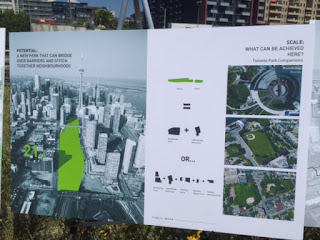 The city plans to secure those rights, allowing them to ensure the space is reserved for public use. But it is unclear at this time if those rights can be purchased, and for how much.

As well, as the Toronto Star reported that although the City of Toronto has made its intentions for the park known, there are still unknowns such as how to pay for the cost of construction.

The park, if constructed, will be similar to what is happening in New York City, where 17 million square feet of buildings and open space will be built on top of a 26-acre space above a Long Island Railroad yard.