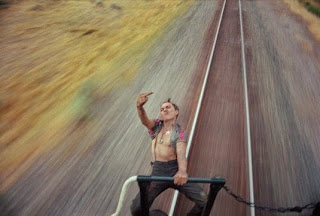 In 2003, Mike Brodie hopped his first freight train. For the next five year he crossed the U.S., becoming known as the Polaroid Kidd for the way he documented his travels.

Now those images are in A Period of Juvenile Prosperity, a new book of photographs about a sub-culture of young people who ride freight trains across North America. 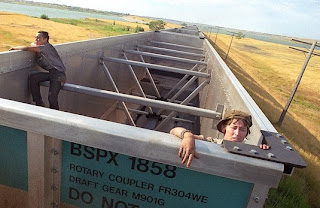 Today Brodie no longer hops freight trains. He is settled and lives in California. In interviews, he described his life on the rails as being like Huck Finn--"a very American thing to do."

Before he quit hopping trains in 2008 (he decided he should "grow up and maybe try to settle down"), he figures he travelled around 50,000 miles by train. 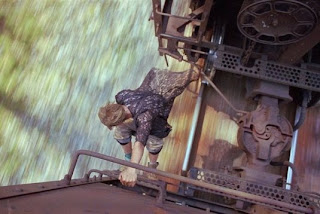 Along the way he encountered a few classic hobos--migratory workers moving from place to place--but most of the people he rode with were young people like himself, seeking adventure.

"It was something they did for whatever reason before they settled down," Brodie said in an interview. 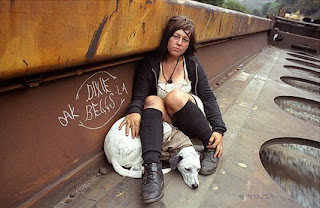 "Some were running away, some were out for adventure. It's like being homeless by choice, I guess, but, living like that you learn a lot of American values like self-reliance, independence."

(Looking at the photos, one wonders if one thing they didn't learn was a desire to be safe--hanging off the end of a fast-moving freight train or scrambling between cars doesn't look like the smartest thing to do. But I digress.) 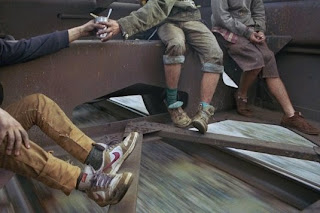 One interviewer noted that Brodie's photographs are "unashamedly romantic: all soft colour tones, wide open spaces and dirty, defiant, vagabond faces caught in the magical light of dusk or dawn." It prompted him to wonder if he may have over-romanticized the tough itinerant life of his subjects.

Said Brodie: "I reckon photography always does that to a degree. But that life is romantic a lot of the time, at least in the spring and summer. So long as you like the outdoors life and you don't mind getting dirty and not having a change of clothes for months, it's pretty great." 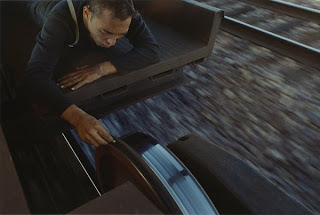 Although he no longer hops trains, Brodie misses those days. "I'm still drawn to that old, free lifestyle," he says. "I still miss the trains, but I'm not a kid any more."

Meanwhile, the 113th annual hobo convention was held in Britt, Iowa in August--a gathering of real hobos. Click here to read more about that event.