Starting Over: Would I Do It Again?


I have sometimes been asked: If I had to start over, would I build the same layout again?

The answer is no. Not because I don't like my layout, or that I wouldn't enjoy another big one. I just don't think I have the energy, drive and determination to do it again.

Truth is, it's a lot of work to build a layout--any layout, but especially one the size of the Manitoba & Minnesota Subdivision (double-deck, 17 by 21 feet). Some days I can't believe I was able to actually do it. 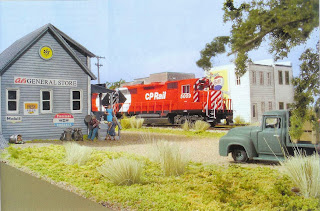 Next year is its 20th anniversary, and there are still thing to finish up (even without my taking down part of it to start again). I never have got around to ballasting and finishing the ground cover and background in one corner of the Fort Francis yard.

If I have to start again, which I will have to do someday (we won't live in this house forever), I think I might want to build a small switching layout--something like Glendale, featured in the photos in this post. 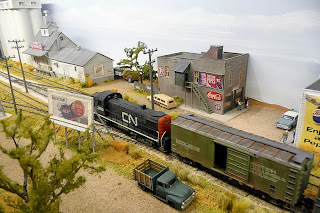 Glendale, which features railroading in Canada, was built by British model railroader Roger Nicholls. For me, the 9 foot by 1 1/2 foot layout shows the best of what a small layout can be.

For the British, with their lack of space, portable layouts like Glendale are common. But they will likely have greater appeal in North America, too, as people move into condos or move more for their jobs.

Or for people like me who, having built their "dream" layout, want something smaller to stay active in the hobby.

For another example of a really small layout in a really unique space, check out Ian Plett's layout in his long distance truck cab.
Posted by JDL56 at 7:33 AM