A couple of weeks ago, I posted an article about the closing of the Toronto Model Railroad Club. In it, I expressed my regret at never having seen it in person.
That made me think of other layouts I have missed seeing--and of those I want to see. It prompted me to think of making a model railroad bucket list of famed publicly accessible layouts to see before I die.

I thought it would be interesting to get a little help in this quest, so I posed that question on several model railroad forums. What well-known public layouts (not home layouts) would people like to see before they, you know, kick the bucket?
I got a number of answers, including one that made me smile: "I'd like to see my own layout be completed before I die." I think a lot of us would share that sentiment! 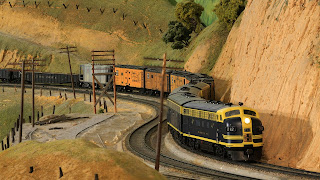 So here, in no particular order, are the public layouts other model railroaders say they would like to see before they die.

Curiously, nobody mentioned the Milwaukee, Racine & Troy, the layout owned by Model Railroader magazine. I wonder why that is--is it because we've seen so much of it in the magazine? (That is one famous layout I actually have seen!)
Minatur Wunderland. (Hamburg, Germany.)

The Great Train Story at the Chicago Museum of Science and Industry.

Some of those are on my bucket list; I also hope to make it to the Doubleheaders layout tour in Kitchener/Waterloo, some day.