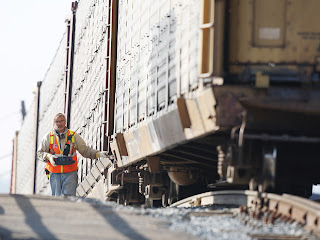 One of the first things Hunter Harrison did when he became CEO of the CPR was to close four hump yards, including the one in Winnipeg.

Upon hearing the news, I wondered: Why did he do that?

At the annual Investor Conference, held Dec. 4-5 , 2012 in New York City, he offered this explanation. (From the official transcript.)

“And I get a lot of questions, probably more questions about this than anything else, why close the humps and what does it do for you? Well, number one, humps are effectively assembly lines.

“And to justify that [hump yards as assembly lines] you haven't a lot of volume. The best analogy I can give you maybe is that if Henry Ford was going to build 10 or 15 Model Ts a day, he would have never had an assembly line. But when you get up to 300 or 400 cars a day, an assembly line was necessary.

“So this hump yard rationalization gives us a great deal of opportunity to save a lot of cost, to expedite the movement of cars and reduce the dwell time . . . . [The CPR will save] somewhere in the neighborhood of $40 million to $50 million in what I would call direct cost and much, much more in indirect cost as a result of the closing of those yards.

“If you go back and look at those [hump] yards, they're mostly 1950s and '60s vetted yards. So obviously, we've outgrown the technology there.

“Our book of business is extremely different than it was then. At that time . . . we were still moving grain and 40-foot boxcars. And about 85%-plus of a typical railroads business need to be classified or sorted in what we refer to as blocks or classifications.

“Today, that's changed. If you look at CP today, with our book of business, we have about, including Intermodal as unit train operation, about 72%, 73% of our business does not need sorting or classifications. So once again, [we do] not [have] the need for hump yards.”