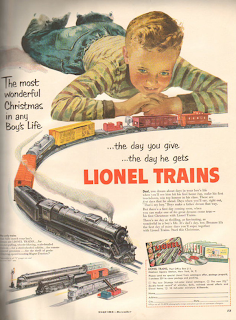 A long time ago in a land far away . . . the only thing many boys wanted for Christmas was trains.

This was the land of my childhood, back in the 1960s. A time when it just wasn't Christmas if there wasn't a train under the tree. And, back then, it meant Lionel trains. 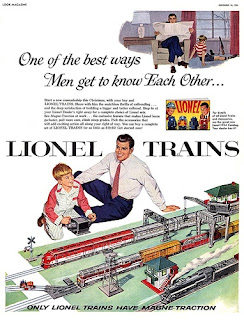 But as the ads on this page show, it wasn't just about trains; it was about male bonding, about the relationship between father and son. Put down that newspaper, dad! Play trains with your son. 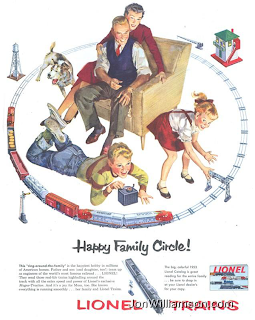 But it wasn't just dads and sons; it was also about family happiness and togetherness: Look! Even sister wants to play with the train. 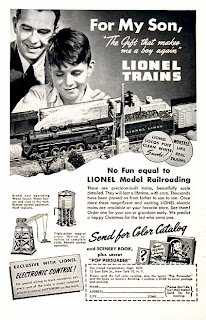 It was also a way for men to recapture their boyhood--to remember those days gone by when they, like junior, lay on the floor watching the train fly by, dreaming about being an engineer one day. (Instead of the boring office job they ended up in.)

Was it ever so sweet and gentle, or has time smoothed over the rough spots in our memories? Nostalgia is a powerful thing, and the blacks and whites of the past can merge into a subtle, mellow grey. That's OK; better to have good memories of days gone by than bad ones--especially if they involve Christmas and trains.

Speaking of which, Lionel understands this nostalgic urge; now you can watch your memories roll along the track by buying the Christmas Morning or High Hopes boxcars. It's not a bad way to say "Merry Christmas," I suppose. 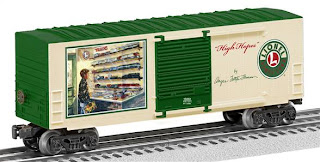 And if this isn't enough to make those of you who are older feel like visiting your childhood--or those of you who are younger want to visit that strange land of the 1950s and 60s--then watch The Wonderful World of Trains, a film produced by Lionel in 1960 (including a train with nine--count 'em, nine, giraffe cars going up and down, up and down).

What will be under your tree this Christmastime?
Posted by JDL56 at 6:33 PM